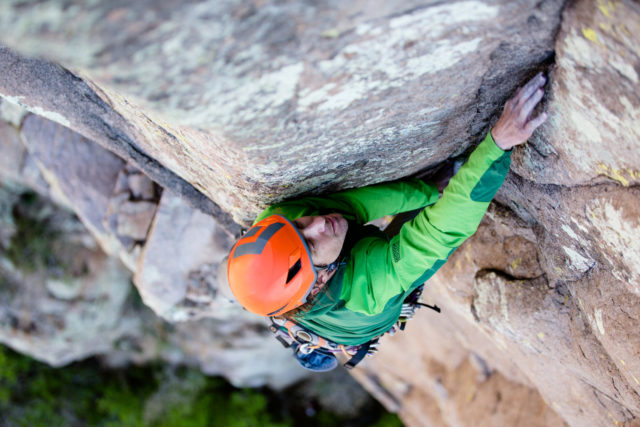 There are two things you should know: first, being called a “dirtbag” in the rock climbing world is an endearing compliment, and second, Brendan Leonard is honest. Ruefully, brutally honest.

In his new memoir, 60 Meters to Anywhere, Leonard dissects his reinvention “from scumbag to dirtbag,” and recounts an internal metamorphosis inspired and maintained by outdoor adventure. He opens the story as an unmotivated cornfield kid from Iowa trapped in an alcoholic fervor. Through the memoir, Leonard employs candor and reflection to show the pain of rock bottom, the agonizing transition to sobriety and finding eventual contentment.

“They don’t tell you that you’ll have to reinvent yourself, which is difficult when all you really know is that you used to love to get fucked-up,” Leonard writes. “I had no ideas, but I was intent on escaping Iowa.”

At 23, Leonard had already been to jail twice for DUIs and had just finished substance abuse treatment. He was looking for something to take hold in his life, like alcohol once did.

Leonard writes, “I wonder if everyone has a period in their life when they’re at least a little lost about what it is they’re supposed to do. You tread water until the boat marked New Identity comes by to pick you up. Sometimes it takes years. You’re never in danger of drowning; you’re just listless, maybe frustrated enough to feel like screaming, ‘How fucking long do I have to do this?’ For me, it was the year I lived by myself, no friends, no money, no car, and no idea what to do with myself in my tiny apartment in Missoula.”

After moving for the University of Montana’s journalism program, Leonard found himself frequenting the outdoors, and when his brother gifted him a climbing rope — the standard 60 meters in length, á la title — he was taught, albeit reluctantly he admits, how to climb. What he learned, however, was more than how to scale vertical terrain; he learned how to efficiently face hardship, overcome fear and to trust himself and his partner to keep their lives safe.

“On the surface it looks like a book about rock climbing and adventure, but it’s really not. It’s really the story of a guy and 13 years of figuring out who he is,” Leonard says. “And that’s something a lot of people can relate to.”

Leonard, who is now 37 and based out of Denver, has preserved his transformation through the written word. Now a healthy, successful writer with three books, numerous magazine articles and his own sponsored blog, Leonard confesses it was a long time before anyone took him seriously.

“I’ve really been working on 60 Meters to Anywhere since 2003, but it was more like 2009 when I had my first draft ready. I sent it out then, and publishers rejected it,” he says.

Nearly six years elapsed until Mountaineers Books agreed to publish 60 Meters to Anywhere. Since then, the book has gathered acclaim, receiving high praise from some of the foremost adventure and outdoor writers. Greyson Schaffer, senior editor of Outside Magazine, commented in review, “Nothing is off-limits for Leonard in this shocking memoir about recovery from addiction and redemption in the mountains.”

Katie Ives, editor-in-chief at Alpinist, lauded, “Brendan Leonard’s prose has the clarity of all those times when, near the top of a mountain as the air spreads out and the world expands below, you feel as though the simple, yet mysterious act of ascent could actually change your life.”

In 2011, Leonard created Semi-Rad.com, a popular, humorous climbing and outdoor blog reflecting on adventure and the human experience.

“I didn’t want to lose touch with the outdoor part of me,” he explains. At the time, he’d accepted a new job that took him out of the outdoor industry. “And I had all these things I’d written that couldn’t necessarily work for a magazine. I wanted a place to share them.”

In the introduction to Semi-Rad.com, Leonard writes, “I think we all need to spend more time doing things we love, going to places that make us feel small, remembering to laugh at ourselves, and getting a little cold, tired and scared every once in a while.

“I have not been featured in a climbing video, or a ski film, and I will likely never win a bike or foot race. But I love the mountains, and being outside. I’m probably a lot like you.”

The first book Leonard wrote, The New American Road Trip Mixed Tape (2013) — a beatnik, soul-searching narrative about moving into his van, traveling the American West and jumping head-first into the dirtbag life — he published himself. His second book, also self-published, Funny Shit in the Woods, is a collection of Semi-Rad.com’s most popular essays, running the gamut from mishaps while going to the bathroom outside to the pitfalls of introducing a new love-interest to a dangerous sport.

60 Meters to Anywhere, however, takes a different tone than his two preceding works. Rather than allowing the humorous and often sarcastic voice in his blog, his memoir adopts a somber, meditative and confessional tone.

“It’s the one thing I can write that has the potential to help people,” Leonard says. “I’m not telling my story in a narcissistic way; here’s an example of a life that isn’t perfect, but in my eyes has become great.”

It is not only through writing that Leonard shares his wit, humility and understanding of the human experience. He has also created and produced several award-winning films, including Frank and the Tower, winner of the 5Point Film Festival “Pure Joy” award, and “35,” winner of the best short film at the Banff Mountain Film Festival.

Since launching himself in the freelance and “creating world,” he says his proudest moment was when a college kid emailed him out of the blue, asking if he’d be a writing mentor.

“The kid was working on his senior thesis. I told him I wasn’t sure what I could teach him, but I could share everything I knew,” Leonard says. “He’d been guiding in Zion [National Park]. He took me big wall climbing, and taught me a lot of things I didn’t know up there. So we traded knowledge. And now he’s got a 26-page mountain profile in Alpinist,” an admirable achievement for a budding writer.

Though Leonard loves writing and producing films, “I’m not a reclusive churning out art,” he says. Through his work, he likes to share and inspire others to make necessary and beautiful changes in their lives, sharing his story with others along the way.

“When you do that, you give people an opening to share their stories and connect with each other too.”

At the end of the day, it’s been a long road, he admits, but “the success of anything is taking it seriously enough.”