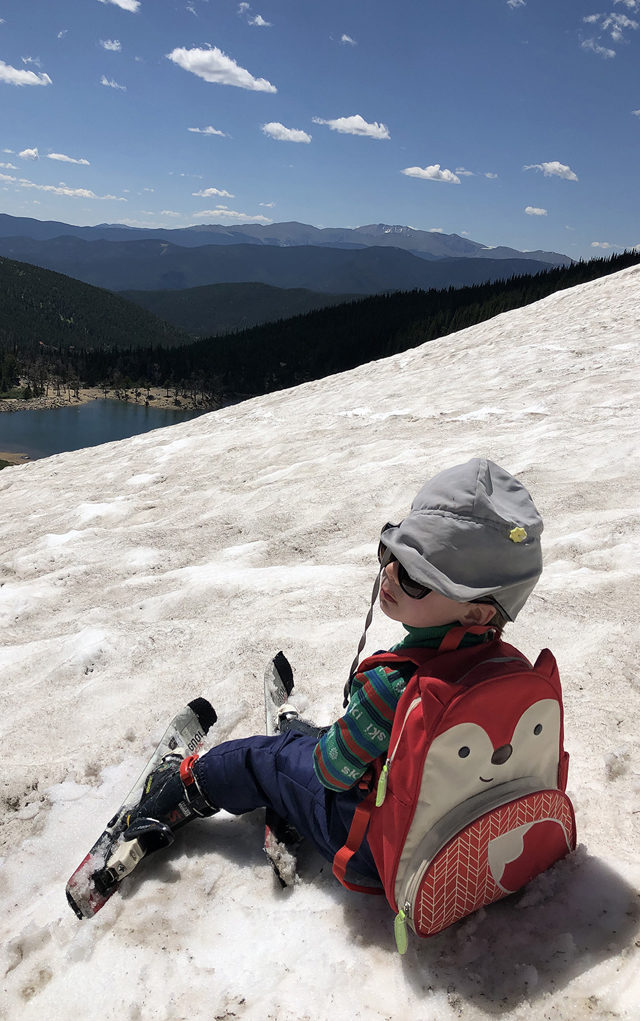 Charlie Leckonby is a skier. And, like most hardcore skiers, he’s always up for a trip to the hill to make some turns. So much so, he recently wrapped up 12 consecutive months of skiing, starting in November 2018 and ending on Nov. 9, 2019. Given the fact that multiple ski areas have already opened for the 2019-20 season in Colorado, it’s likely he’s going to keep his streak alive.

But Charlie isn’t your average snow shredder. He’s a kid, just 4 years old, and his passion and journey to ski every month for a year has impacted his parents in profound and meaningful ways — ways in which they never imagined when they put him on the snow with skis for the first time.

Charlie made his first “turns” strapped to his mom Tiffany’s chest when he was just 5 weeks old. This marked the start of something big, but Tiffany and Charlie’s dad, Roy, didn’t realize it at the time.

“I just wanted to expose him to new opportunities,” Roy says. “He’ll love what he wants to love, but he won’t know what he will like unless we give him the opportunity to like things.” He pauses and shrugs, “Charlie loves skiing.”

Charlie’s 12-month streak, Roy says, “happened by accident. We had a great snow year, and Arapahoe Basin stayed open really, really late. We skied on July 4, and from that date on it’s not hard to ski two more months. It happened organically with the season and a sense of adventure.”

The Leckonbys’ approach to Charlie’s skiing — focusing on the adventure and if Charlie is having fun, then rolling with it — seems commonsense. But, as most professional observers of parenting would point out, it’s at odds with current trends of “helicopter parenting,” where adults carefully chart controlled paths for their children — paths which probably don’t include letting a kid decide that they want to ski the ragged snow of Saint Mary’s glacier in the waning days of September, where a fall could prove fatal. And then facilitating that decision.

But with a kid like Charlie, who puts his skis on in the yard in the heat of July and tromps across the grass, those dicey turns in September are a way to stoke the fun and fuel of adventure. Along with the fun for Charlie, however, comes the responsibilities of Roy and Tiffany. They’d be the first to tell you navigating the challenges of raising a kid as first-time parents isn’t always easy.

“Trustful parents are those who trust their children to play and explore on their own, to make their own decisions,” writes Dr. Peter Gray in Psychology Today, noting how this ethos contrasts with current parenting fashions, where parents direct their children’s activities and limit their freedom because they fear for their safety and/or futures. Many parents think they can make better decisions for their children than their children can for themselves and rather than viewing children as resilient and competent, they believe children develop best when following a path that’s been carefully laid out for them by adults.

Roy admits that a big lesson for him over the past four years has been learning the importance of letting Charlie build resiliency and competency for himself. Skiing happened to serve as the perfect medium.

“One purpose of the adventure is just trying to teach him to have some grit,” Roy says. “We’ll be hiking or it will be cold and he’ll not be into it so much, and I’ll have to remind him that he’s here because he wanted to be here, so we need to get through the tough moments and he needs to remember that he’s going to end up having fun.”

Tiffany agrees: “I think it is important to encourage a lot of different things, but especially with skiing, you have to make the effort to do it, which can be challenging, and it can be tough out on the mountain. But you also, as parents, want to set him up for success. You want to make sure he has a good time so he will want to go back.”

“That’s the value of St. Mary’s Glacier!” Roy laughs. “The hike up there, the effort, it instills that you have to work through things. Charlie has to own his decision to want go skiing up there.”

That this approach to adventure (and life) is positive and empowering for children is corroborated by experts.

“Overcoming obstacles is a great self-esteem booster for children,” says Meaghan Roberts, author of Sticks & Stones and My Rock, a pair of guidebooks for parents of teenagers. “Parents must encourage their children to do their best and not give up because something is difficult. Life will present challenges on many occasions. It is the responsibility of the parent to show their child that [they] can overcome anything, even when the child may not believe it. An opportunity to overcome a challenge is a great chance for parents to show their children they are capable of achieving anything they put their mind to.”

Roy and Tiffany believe in this to a great degree, saying that their decisions to facilitate this year-round snow quest was about letting Charlie chase his passion for skiing, but also about making him own and face the consequences of that passion: the cold, the hikes into remote snowfields in the middle of summer, and the wrangling of gear that comes along with it.

“It’s pretty obvious that he’s proud of what he’s done when he comes back from one of these ski adventures,” Tiffany says. “You can tell it is important for his self-esteem and important to him.”

But ultimately, what does Charlie think about skiing and his streak?

Over pizza at Under the Sun, I ply him with questions.

Is he a good skier? “No, I keep falling down,” Charlie says.

His favorite part of skiing? “Nothing” he says, with a mischievous smile.

Then, obviously bored with the interview, he decides to take a nap.

Tiffany’s a bit distressed that Charlie isn’t cooperating, but the reality is that at four, he’s got better things to do than promote his year-long skiing streak to a Boulder Weekly journalist. And it allows me time for a couple more questions for Roy.

How will he feel if Charlie becomes better than him? Or what happens if Charlie decides in a few years to quit skiing?

Roy hesitates, saying, “I’ll be saddened if Charlie decides that skiing isn’t for him.” But then he laughs. “I look forward to skiing being something we can do to together, and I look forward to the day he out-skis me.”

Roy’s tips for skiing with kids:

1) Let them decide if they like skiing or snowboarding and, if they do, nurture their passion.

2) Don’t worry if they fall. “Charlie is made of rubber,” Roy says.

3) Go when or where it isn’t crowded. “I’m most concerned of someone hitting him,” Roy says. “I’ll ski backwards in front of him to watch for people flying down the mountain at us. Weekdays are definitely the best.”

4) Hot chocolate is good. Especially with whipped cream on top. “We stop for hot chocolate when he is cold or tired,” Roy says.