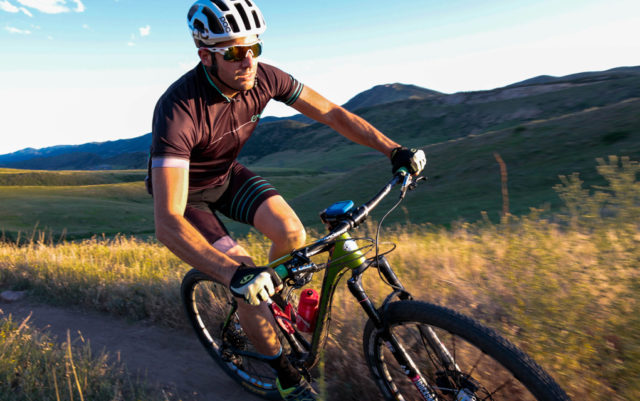 Their tent caught my eye at the Iron Horse Classic in Durango. Again in Castle Rock, there was their rack of t-shirts and rider jerseys at the finish-line festivities of the Elephant Rock Century. Maybe it was the hip designs, standing out from among the rows of canopies. Maybe it was the charm of the name emblazoned on their tent — Compel — that drew me over.

The apparel was different than most cycling wear — fresh and unique, hip and a bit retro, as if crafted by a graphic artist I might “favorite” on Etsy. A change from the boring, aggressive, loud, tacky or actually-really-beautiful-but-crazy-expensive cycling apparel I’ve grown used to seeing. These lovely little jerseys also carried price tags of about $65, relatively affordable as far as riding clothing goes.

And behind the apparel was another bit of unexpectedness: two Latino co-owners. Full disclosure, I’m a white female, who rides regularly alongside a white male. I’m certainly not helping the sport’s seeming lack of ethnic and cultural diversity. Take a look around Boulder and the Front Range any given spring or summer day, and you’re bound to spot dozens, even hundreds of white male cyclists, neck-to-kneecap in Lycra. Same goes for these group rides around which I plan my summer. You’d be forgiven if you formed the thought, “Cycling in Colorado is dominated by white men” (or maybe I’m trying to forgive myself for forming it). There’s something refreshing about meeting two avid Latino Front Range cyclists, who are also carving their niche as cycling apparel entrepreneurs.

Compel is the creation of Joel Perez and Javier Badell — two Venezuelan-born Coloradans who met and bonded over bikes at a Front Range party seven years ago. Perez was looking for someone to show him around on his new mountain bike, and Badell was racing for Denver’s COMotion Sports. They were fast riding buddies. Professionally, Badell was thriving as a graphic designer, and Perez was dreaming of something better than his day job, tied to a desk and staring at a computer screen, working for a credit card manufacturer. At some point, they started musing about making their own riding gear.

“I was talking with him one day, and basically said, ‘Hey Javi, what would you think about designing cycling clothes?’” Perez says. “And he said, ‘You know I designed the shirt for my cycling team, right?’ So I said, ‘This is what we’re going to do.’”

Perez went to every cycling store in town and was pretty disappointed by what he found, “boring stuff, and jerseys with beers on them — horrible designs,” he says. Boutique cycling clothing wasn’t really a thing yet.

“Practically no one was doing what I’m doing today. I thought, there’s a real gap here. What if I come up with something with the same quality, a boutique design, and way lower cost?”

The two hatched a plan. They’d start with bike-focused t-shirt designs to get their foot in the door with stores.

Badell created the four initial designs. Indyink in Denver did the screenprinting. Perez handled the sales, on a consignment basis.

“I started with my money,” Perez says. “All my money.”

That was five years ago, in 2011. By 2013 the duo was making cycling jerseys, tabling at cycling events and selling wholesale. Events are their bread and butter now. Last year they opened their first line of credit and in September, they’re headed to Vegas for their first Interbike — the country’s largest cycling industry expo — and hoping to get noticed.

Compel even started its own team this year, spreading the unique brand and its diversity out on Colorado’s roads and trails.

“I have six people, and five of them are Latino,” Perez says. “I have a Chilean and muchos Venezuelans.”

Badell still designs all of the shirts, jerseys and now riding shorts in the Compel line. The t-shirts and tanks are still screenprinted in Denver. They’d experimented with making their apparel in China — a disaster, Perez says. The quality was good, but communication was a hassle and costs were too high. The cycling gear is now made in Venezuela’s neighbor to the west, Colombia.

“Colombia actually has a huge reputation for making quality clothing. When nobody knew what Lycra was, they had it,” Perez says. On his first trip to Colombia, he stayed with friends and spent three weeks visiting small factories, looking at fabrics, making connections. He found the right crafts people in Colombia. They get along well. They speak the same language. They meet face to face often.

“That’s the secret,” he says, to gorgeous designs, on quality fabric, at competitive prices. Very compelling.

Both Perez and Badell found their way to the Front Range through roundabout paths. Perez chose to move to the U.S. after several childhood vacations to Disney World. His mother is a retired architect, and his father, who has passed, was a lawyer. Perez fell in love with Colorado on a vacation to Keystone, after a year in Mississippi working in restaurants and learning English, and moved to the Centennial State. He married a Colorado-born ESL teacher, and together they have a 3-year-old daughter. He fell in love with cycling here, as a recreational activity in these beautiful mountains.

“We see this as a sport that clears our minds,” he says, of himself and Badell. “It takes you to a completely different world when you’re riding.”

It’s important to note that cycling is growing among Latinos — probably more than you realize. The League of American Bicyclists reported the fastest growth in U.S. cycling in the Hispanic, African American and Asian communities. A study commissioned by Boulder-based People for Bikes found Hispanics were more likely than any other ethnic group to have ridden a bicycle in the past year, for both transportation and recreation and all manner of social activity.

That’s national data; there’s less Colorado-specific data available. But Dan Grunig, director of Bicycle Colorado, says advocacy groups like his are working hard to get better demographic data across the state and across all types of riding. Anecdotally, the organization’s Safe Routes to School program is staffed wholly by Spanish-speaking educators, to serve the thousands of Latino families their program touches. Its flat-tire-changing program holds special sessions just for Latina mothers, who can make sure a flat never sidelines any rider in the family. Another organization, the Front Rangers Cycling Club, runs an outreach program in partnership with the Denver Police Department to identify at-risk youth.

Having more Latino representation and role models, it strikes me, can only improve the state of bicycling in Colorado — for Latinos in particular and for our entire community. Especially with a thriving little business, and especially with a name like Compel.

“We’re here to motivate you to bike more,” Perez says. “We’re compelling you to ride more.”