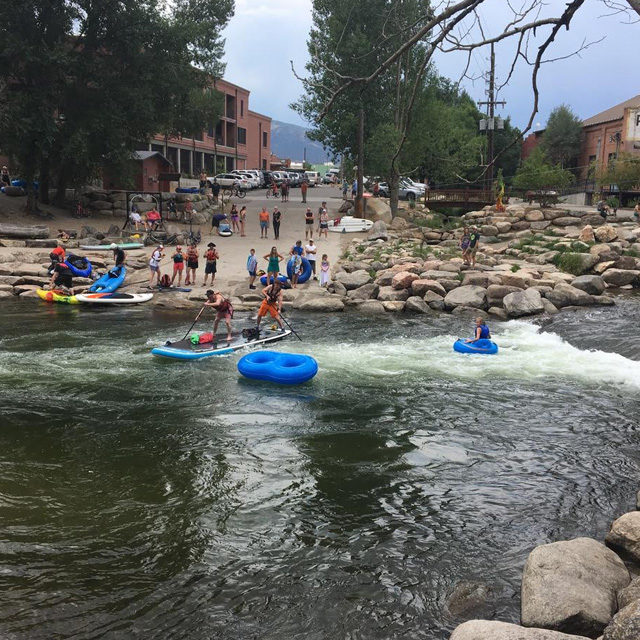 “Look at all those people!”

It was mid-July, and my family and I were picnicking on the banks of the Arkansas River, laughing as we witnessed about, oh, 10 people share a single stand-up paddleboard. Around us, the city of Salida buzzed like Richard Scarry’s Busytown, only with people riding inner tubes, rowing rafts and riding mountain bikes instead of visiting the bank and boarding a bus. Beards, Birkenstocks and laid-back beer gardens were all on display; it was good old-fashioned fun in a city that didn’t seem to have changed much since the 1960s.

Later in the day, we drove 24 miles north to Buena Vista, a town also teeming with adventure — but in a much different way. Here, the brand-new Surf Hotel, next to the Surf Chateau, offered hip, luxurious accommodations right near upscale restaurants and gourmet shops serving craft coffee and homemade Italian gelato. My children, then 9 and 11, gleefully climbed an artificial rock wall as we waited for a table at the Eddyline bistro before heading back to our bunkhouse at Thunderbird Ranch. The time spent soaking at Mount Princeton Hot Springs, tubing the Arkansas River and biking the foothills of the 14,000-foot Collegiate Peaks had us pooped.

Just as my husband, Carlton, and I were letting our eyes flutter closed, watching the stars pinprick the inky black sky, ranch owner Monika Courtney stopped by with a candle — and an illumination on the changing times. Buena Vista’s new South Main development, pioneered by former professional kayaker Jed Selby and his sister, Katie, has transformed the town, to differing opinions.

The “old-timers,” Courtney told us that July night, were complaining. But the new generation, with a vision of New Urbanism, is just what the area needs.

As a newcomer to the Front Range who spent 15 years in Vermont, I was struck by the undercurrent of adventure-tourism-wrought tension along the Arkansas River. So in August, I place a call to Thunderbird Ranch owner Courtney to ask about old ways and new. “There is a lot of development here in BV — Jed Selby has been instrumental in growing South Main, attracting a lot of rafters and kayakers, which is awesome; the younger generation, they love this, and some of the locals do; they love the new vibe,” Courtney says. “But some generations in town are not very inclined to this growth; they can’t handle it.”

Courtney has lived in BV for three years and operates an animal-rescue mission in addition to the Thunderbird; she says that she feels divisiveness toward new people. “There’s an animosity because they want to keep the town small and unchanged, but I feel you have to go with progress and keep it smart,” she says. “Keep it small and nice, but you can still accommodate a different palette of tourism; different interests and different groups of people, because the area is so rich in the outdoors — hiking, fishing, rafting, camping, hunting, dirt-biking, mountain biking, so you have to come to a happy medium.”

That’s just what Selby aims to do with South Main, he tells me in a separate call. “I wanted to build a whitewater park, and a neighborhood that was walkable,” he says of getting the idea for developing Buena Vista in the early 2000s. “Truthfully, South Main is larger than I had intended.”

Inspired by Boulder, Durango, Crested Butte and Telluride, Selby wanted to bring New Urbanism to BV, and began drawing trails, roads and lots, realizing the parcel he had purchased had more land than he thought. So in went more than the park: Residential units (65 of 500 planned are now built), restaurants, and the Surf Chateau have all been added to Selby’s vision. “There’s still a lot of runway to go,” he says, and adds that South Main is now about 25 percent complete.

“There’s been a lot of positive reaction,” says Selby, pointing out that South Main has in turn revitalized the older Main Street, which was more than half vacant when he began the development. “The vitality has been immense, the sales tax has more than doubled, and the median age has dropped 10 years since we started while the median wage has risen. The town is prospering and is really cool for families; you can be in the mountains without being in a expensive resort town.”

Not so fast, says 10-year Buena Vista resident Shari Perkins. “I avoid South Main,” she says, mentioning the noise and traffic from music festivals organized by Selby among other criticisms. “He’s wanting to change our town and bring things into our neighborhood that disrupt hundreds of lives. Some people have to be at jobs at 4 o’clock in the morning and they’re having to get by on two or three hours of sleep — we’re talking about corrections officers and waitresses and city clerks.”

Perkins also says that BV suffers from a housing crisis, with people living in tents and cars in the mountains because they can’t afford the rent.

Some 24 miles south, lack of affordable housing has inspired developer Duane Cozart to propose Salida Crossings, a modern complex of 34 residential units and 8,000 square feet of commercial space just outside of downtown. The project narrowly passed a referendum vote in late September, having drawn mixed reactions, much of them vocalized on Facebook. “No thanks!” writes one detractor. “Too much too live in a condom [sic] surrounded by people on every side plus homeowners’ association that are [sic] too busy about everybody else’s business. Heck no!”

Cozart says that he knew Salida Crossings would catch him some flak, and that this is the right solution for a city in which he’s had to shutter several businesses because of a lack of proper housing for employees. Originally, he planned to build a hotel, but realized that would be more of a problem — drawing more adventure tourists (called Tourons, according to Courtney) — instead of providing shelter for city residents. That means that BV and Salida may drift further apart. “Buena Vista is doing a great project there,” says Cozart. “Are we copying their product? No. Salida already has a downtown area; it’s been a natural progression during the past 130 years.”

Nature and progress — look at all those people indeed.