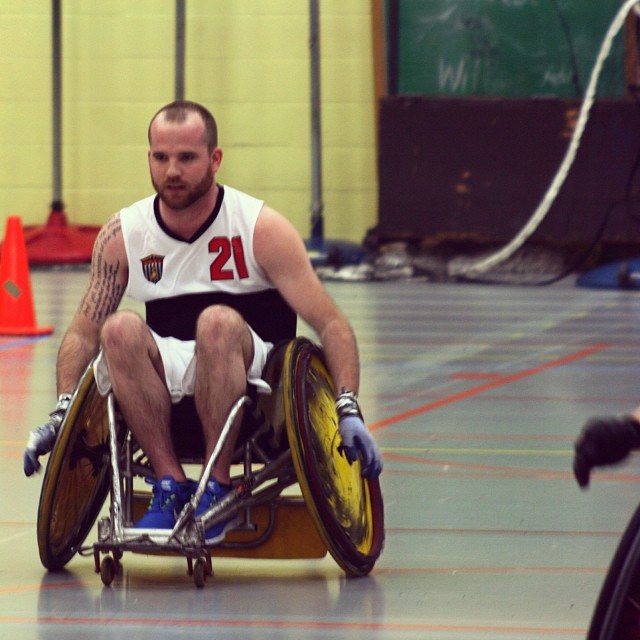 University of Colorado graduate Thomas Cloyd has gone through painstaking changes in his life, both physically and mentally, after a spinal cord injury left him in a wheelchair. The May 4 World Run in Denver, a race organized to raise money for a cure for spinal cord injuries, has prompted Cloyd’s return to his former stomping grounds to do his part to get himself and so many others back on their feet.

Cloyd graduated from the University of Colorado with a degree in advertising from the School of Journalism and Mass Communication in the spring of 2009. Cloyd, who originally hails from Edina, Minn., has a passion for snowboarding, lacrosse and “all things extreme.”

A contagious smile and penchant for comedic storytelling often make him the center of attention. Spending 90 seconds with him seems to be all the time Cloyd needs to have anyone, friend or total stranger, holding their stomach in laughter.

Following graduation, Cloyd moved to Argentina to teach English. After a yearlong stint in Argentina, Cloyd returned to Minneapolis to begin a career in creative advertising.

The career path and general lifestyle Cloyd envi sioned for himself dramatically changed in July 2012. While on vacation in Wisconsin during the Fourth of July holiday, Cloyd was involved in a boating accident, which caused his C5 vertebrae to be pushed into the middle of his neck.

Lying motionless in the lake, Cloyd knew immediately he had just gone through a life-altering mishap.

“I just remember floating and thinking to myself, ‘This is one of those things in life that is a big deal,’” Cloyd recalls. “I was pretty calm, but I still knew something had gone horribly wrong.”

After discovering him partially above water, his friends brought him back into their boat, refraining from moving his head and neck in fear that he had sustained an injury to his spine. The group then raced to a Milwaukee hospital, where Cloyd was put through five hours of surgery.

Five days later, Cloyd left the hospital in a wheelchair.

The then 25-year-old began a grueling schedule of rehab and physical therapy. The exercises challenged Cloyd physically, but the mental hurdle of living a life as a quadriplegic was far more daunting.

“As a quadriplegic, I can’t even grip anything,” explains Cloyd. “So opening doors is difficult, holding a plate is tough, cooking — everything.”

Like so many others who have suffered a traumatic spinal cord injury, the first six months after undergoing surgery were the most difficult for Cloyd. Coming to terms with his injury and newly established physical limitations was challenging, to say the least.

“I wasn’t living my life to its fullest extent because I felt like I was in a phase, or hibernation,” Cloyd says.

After a six-month lull, Cloyd finally came to grasps with his injury and emerged determined to do what he did pre-spinal cord injury: live life to the fullest.

“Once I pushed myself out there, I realized there was so much more for me to do than sit around the house,” he says. “Whether it is riding bikes with friends, touring breweries or playing adaptive sports, this is life and can be fun. I’m in the prime years of my life, and I’m going to enjoy it.”

Cloyd joined the local wheelchair rugby team, and began shifting away from his initial forms of therapy and working out with the Courage Center’s Activity Based Locomotor Exercise Program (ABLE) of the NeuroRecovery Network in Minneapolis. ABLE provides a form of therapy that includes movement training and functional electrical stimulation, both of which aim to regain strength in muscles and functionality of the body.

Not only is Cloyd performing in a more progressive form of rehab, but he has also taken to educating himself on the newest and most cutting edge ways scientists are working toward finding a cure for spinal cord injuries. His passion for any news relating to curing spinal cord injuries is evident even in his voice, but also in how Cloyd discovered Wings for Life.

Created by the founder of Red Bull, Dietrich Mateschitz, and two-time motocross world champion Heinz Kinigadner after Kinigadner’s son, Hannes, suffered an accident that left him tetraplegic, Wings for Life’s mission is to help find a cure for spinal cord injuries.

“I’ve seen a lot of the different avenues people and organizations have gone about bettering the lives of people with spinal cord injury, but Wings for Life is working for a cure for this ailment,” Cloyd says. “The money raised by the Wings for Life is not going towards providing people with spinal cord injury with wheelchairs, pay for physical therapy, or trying to cushion anyone’s life. All of those things are great, and I appreciate and respect the organizations providing that type of care. Wings for Life is doing their all to find a cure, and that’s what I’m all about.”

The latest event Wings for Life has crafted to raise money for the scientific research and clinical studies of spinal cord injuries is a worldwide race appropriately called the Wings for Life World Run. Races are taking place in 34 locations across 32 countries on six continents. Race locations include Auckland, New Zealand; Barcelona, Spain; Cape Town, South Africa and Lima, Peru.

As if organizing 34 races spanning the entire globe was not a remarkable achievement on its own, Wings for Life has organized the event so each World Run will kickoff at the exact same time.

“It’s a predefined route that starts at Sports Authority Field at Mile High, and runs through downtown Denver, then out to the east through Aurora,” Wasley says. “Once you get through Aurora, you’ll end up at the I-70 corridor, continuing on as far as you can. At that point, any runner would be over a marathon’s worth of distance running.”

Thirty minutes after the runners take off from Sports Authority Field, Catcher Cars will follow behind the participants starting at 15 kilometers an hour, or just under 10 miles per hour, and will gradually speed up as the race goes on. As Catcher Cars pass runners, those participants bow out from the race.

“The race is really geared towards anyone,” explains Wasley. “When people ask me how long the course is, I tell them I designed a 100-kilometer course. But with the way the event is setup, you could walk that first part and get caught right away, or you may be an ultra-endurance runner who can go for 40 miles. It’s going to be a wide variety of participation.”

Registration for Wings for Life World Run closed April 27, but there will be an undetermined number of registration spots available the day before the race. The number of participants is limited based on the event organizer’s ability to shuttle participants back to Sports Authority Field once a Catcher Car has passed them.

The Mile High City will be the stage for more than 2,000 runners, while Wings for Life is anticipating more than 150,000 registered participants worldwide. With a flat registration fee at $50, Wings for Life is on pace to raise over $7 million, and every penny will go toward finding a cure for spinal cord injuries.

Even though there are only three World Run locations in the United States — Sunrise, Fla. and Santa Clarita, Calif. being the other two — Wasley says that Denver’s fitness-crazed makeup, as well as the city’s eagerness to make the event possible, made Denver an ideal candidate to host a World Run.

“It’s an amazing city in itself,” Wasley says. “For the endurance population, it’s a very healthy city. The fact that you can put a major event like this on in an urban setting like the city of Denver is amazing. They city has been unbelievable to work with, to be able to shut down 60 miles of roads for the event. It was a no-brainer to work with the city of Denver and Aurora, and the state of Colorado.”

Wings for Life has also made the event viewable for any enthusiasts who are not able to make it to any of the race locations. Video cameras will be dispersed throughout the 34 courses, and cameras will also follow each race’s leader. The live feeds will be available at www.wingsforlifeworldrun.com.

Being a University of Colorado grad, Cloyd has a strong base of friends who live in the greater Denver area. Upon hearing the news that Wings for Life was organizing a World Run in Denver, he immediately began educating his friends about the Wings for Life World Run. Along with his sister, Cloyd is driving to Denver for the May 4 event, and will have over 65 friends, all of whom are registered for the run, eagerly awaiting his return to Colorado, where they will run alongside him at the World Run.

Denver’s World Run will start May 4 at 4 a.m. People interested to register can do so at Original Brooklyn’s, 2644 W. Colfax Ave., Denver, between 12 p.m. and 5 p.m. on Saturday, May 3. Contributions toward finding a cure for spinal cord injuries are welcomed at www.wingsforlife.com.