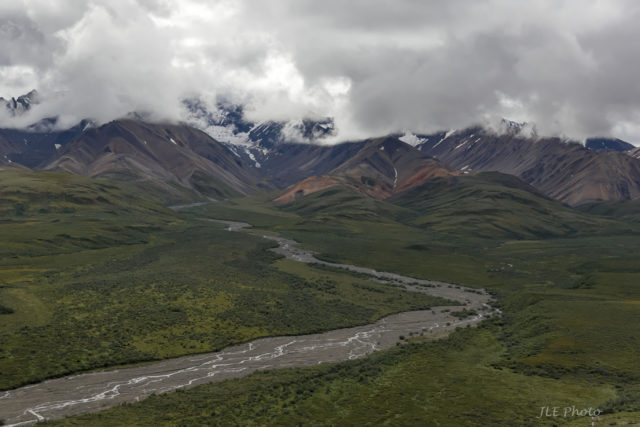 Alaska is one of those places that exists as much in mystique as in reality. The land of the midnight sun transcends time and space, its immutable scale and beauty attracting people from around the world. I felt the magnetism myself — the natural Alaskan wonders drawing me to experience firsthand its exceptional natural dimensions. It’s the most mountainous state in the U.S., with 14 mountain ranges all together housing the 10 highest peaks in the country.

I wanted to see the tallest point in North America — the 20,320-foot Denali. I knew arriving in Alaska would be spectacular, but I did not expect Anchorage to have a waterfront setting on par with the likes of Vancouver. The ocean and mountain landscape I first saw from the window of the plane was stunning and included a flyover of Prince William Sound that was surrounded by glacier-capped peaks. Alaska contains 13 national parks or preserves, 300 rivers, 100,000 glaciers, 1,800 islands and 29,868,161 acres of wilderness. The serenity this wilderness promises is irresistible. Exploring it would take a lifetime; I only had two weeks.

My goals: hike as many trails as possible while immersing myself in Denali and Kenai Fjords national parks, and see as much wildlife as possible — like the 9-foot-tall grizzly bears and 7-foot-tall moose. Only one out of 13 travelers actually get to see Denali when visiting Alaska because it’s usually shrouded in clouds in a region known for moist, cloudy weather. Picking an ideal month is impossible, but consistent advice said to avoid the swarms of mosquitos and biting flies. I chose late August and gave up the warmest temperatures and longest days of the year; but, still, the sun set at 9:30 p.m., and the insects were non-existent. I recruited two friends and we shared a room, some snores and a rental car.

The day we landed was sunny and the three-hour drive north to our lodge was beautiful — there was so much to absorb that time sped up, minutes passed as quickly as the shrubs, trees, rivers and mountains that crossed through the scope of my window.

Denali, though, was veiled in clouds to the west. A friend who’d spent two weeks in Denali National Park told me he never saw the mountain due to persistent rain, until he paid for a small plane to fly over the clouds. I’d decided to reserve a flight with Kantishna Air for us as mountain-view insurance, wherein we’d pay $250 (each) for a scenic air taxi ride.

On the way to the lodge, the driver announced highlights, and stopped for wildlife pictures. I climbed a hill west of the Eielson Visitor Center and watched hawks gliding above the river basin far below with hazy brown foothills marching off to the eastern horizon. We stopped and gazed into a deep gorge with a river sparkling below. We only saw a few caribou, besides the hawks; the bears and moose were hiding.

The thick cloud cover persisted the whole bus ride and into our second day in Denali National Park. It made me despair at seeing Denali from the ground. Seeing a mountain of that scale up close is a rare privilege — majestic mountain vistas dwarf our sense of space, and bend light so that judging distance and height become impossible.

Our lodge in Kantishna, a former mining area now surrounded by national park wilderness, provided bear spray and we brought our own bells. Our first hike was a 1,000-foot climb and 6 miles. We climbed through thick brush looking for bears. We emerged onto a ridge, the clouds broke and we were thrilled to see a distant glaciated mountain on the skyline. We took lots of pictures of this ethereal snow-draped ridgeline sailing above the clouds and wondered what part of Denali we were seeing. After another hour of climbing, the clouds dissipated and we saw the top of a truly massive mountain soaring many thousands of feet above what we realized was now a downright dinky shoulder of 17,402-foot Mount Foraker. We had mistaken Foraker for Denali. Still, we were awestruck; we had a distant glimpse of magical Denali sailing high above the swirling clouds like a defiant optical illusion. We celebrated before the clouds swallowed it. We scanned the foothills for wildlife, saw none. The next cloudy hiking day in the Kantishna hills, we could see sun-dappled, multi-hued green and rust tundra, stretching far away to the horizon from the top of a windy foothill. It was a stunning view of endless tundra with no roads, reinforcing the insignificant place of humankind in this sprawling landscape.

That night the lodge keepers told us it had been very rainy and cloudy all summer in the Denali area, so we were shocked when we awoke to a sunny day. Kantishna Air suggested flying immediately, rather than taking a chance. We took an afternoon flight and it was downright intimidating, even vertigo-inducing because we flew so close to the shoulders of the mountain. Denali is massive and it is like flying over a glaciated mountain range rather than a single mountain. It dwarfs Pike’s Peak or Longs Peak because of its countless soaring ridgelines, and it’s 6,000 feet higher than Colorado’s tallest peak, Mount Elbert. We flew over the approaches where climbers make their final camps. Over 1,000 people a year attempt it, and less than half make it. In 2018 even fewer summited because large avalanches swept through base camps; thankfully the climbers were spared. It takes up to a month to climb it and usually costs $4,000-5,000. Our $250 flight was a bargain for reaching the twin summits.

I could almost touch the snow pillowed flying buttresses. We flew over several of the cascading glaciers that originate from the mountain that are each 30 miles long: Ruth, Peters, Haugen and Muldrow, and the even longer Kahiltna at 45 miles in length. It would be a long, dangerous trek to approach on any of these crumbling, melting monsters with countless crevices. You see geological and geographical features on an over-flight that you could not see any other way other than by summiting. It made me realize that Denali is one of a few North American mountains that is on the same scale as a Himalayan or Andean peak.

Later we attempted to see Denali at Wonder Lake, one of the best viewpoints. We arrived early one morning to see the stunning relief of this monster as clouds were devouring it. Seeing the height of the top from ground level is astounding; even Foraker was impressive before being enveloped.

We headed off for the snow-capped ocean-front mountains of the Kenai Peninsula and the sparkling fjords of Kenai Fjords National Park, about a six-hour drive southeast, hoping to see more wildlife and an elusive grizzly. The Kenai Peninsula is a magnificent land of glacier-topped mountains, the sparkling Gulf of Alaska and hike-able glaciers like Exit Glacier. Hiking next to a glacier is a unique and humbling experience that dwarfs your sense of time and place as you to try to absorb the significance of a towering ice creature that has spent the last millennia crawling across the tundra. The Exit Glacier has retreated significantly but its eerily blue hued and dangerous crevices still tower over hill and vale as it feeds the rivers below.

On our last day, on the way back to Anchorage, we stopped along the Kenai River, renowned for spawning salmon and bears. We hiked along the river all morning and were about to give up when I suggested one more half-mile of hiking. We came upon a large, golden female grizzly enjoying some of the thousands of spawning salmon in the river. She was only 50 feet from the shore and a ranger told us we were safe to take photos. We spent an incalculable moment in time watching her fishing in the sparkling water — a thrilling sight that fully slowed our sense of time, syncing smoothly with nature’s rhythms. She finished biting off the last salmon head and then bounded up the opposing bank of the river, leaving us to, again, recalibrate our sense of time and place in this world.