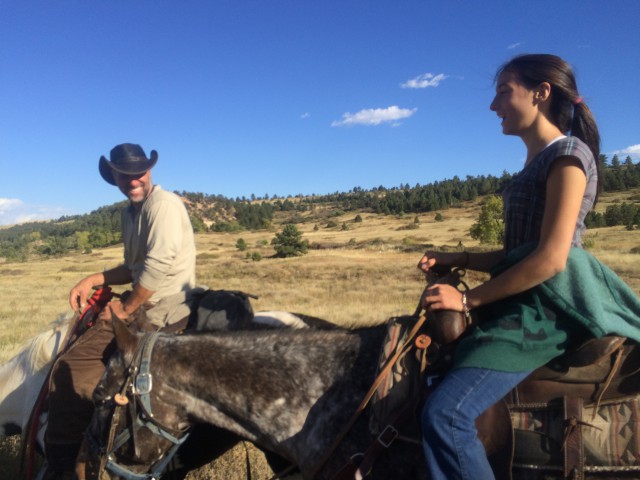 I don’t usually get up at 7 a.m. I wondered if the horses could sense caffeine jitters the way they could sense other kinds of jitters.

I was spending the day riding with participants in a 400-mile ride that’s now passing Boulder en route to the Pine Ridge Indian Reservation in South Dakota. If I’d known where last Thursday’s 10-mile stretch would take us — steep single-track, dark underpasses, downtown Golden, into an entanglement with hostile tree branches — I would’ve been plenty jittery without the coffee.

Dave Ventimiglia pulls up to the Genessee Park-n-Ride off Interstate-70 towing a horse trailer.

Ventimiglia is the executive director of the Tipi Raisers, a nonprofit based on Pine Ridge and chaired by Lakota elders. The Tipi Raisers recently received an unusual donation: an old ski lodge slated for demolition.

“We got the call on the third of August,” Ventimiglia says. “The whole thing had to be down and out of Breckenridge by Aug. 31.”

Ventimiglia quickly mobilized 14 Lakota people to travel from Pine Ridge to Breckenridge, where they set up a tipi village and got to work. Piece by piece, they took the lodge apart — just in time.

It symbolizes hope on a reservation facing epidemic alcoholism and heartbreaking suicide rates, which are particularly high among the youth. Ramona White Plume, a Lakota elder who lives on Pine Ridge, says the youth have lost the wacintaka, or fortitude, needed to fight off the perils of poverty. If they could reconnect with their culture, they could regain their wacintaka, she says. The lodge could serve as a gathering place, a step toward rebuilding what has been lost.

But now the lodge sits in pieces on the reservation, like a neglected jigsaw puzzle. Reassembly will cost an estimated $40,000. So Ventimiglia had an idea: ride from Breckenridge to Pine Ridge, spreading the word about the project.

If the Tipi Raisers can raise enough money, they could even resume Ventimiglia’s other stalled project: building log homes to alleviate the Pine Ridge housing crisis.

“That would be a dream come true,” Ventimiglia says, “to be able to accomplish both.”

Before joining the Tipi Raisers, Ventimiglia started a logging operation in the Black Hills bordering the rez. He hired Lakota people to cut pine beetlekill that would be used to build new homes. They logged 6,000 trees. But due to lack of funding, the logs now sit idle.

The new homes are desperately needed, explains White Plume, who also serves on the board of the Tipi Raisers. In her house, each of her three surviving children shares their bedroom with their own family. (One daughter has four children of her own.) White Plume sleeps on the couch. This housing situation is typical on the rez.

“We’re like a third-world country,” she says. “The trailer homes our people get, we make them livable. But some of them have busted out windows, they don’t have water, they don’t have electricity.”

White Plume says she plans to travel to Boulder for a Tipi Raisers gathering. The event details are still hazy, but you can connect with the Tipi Raisers on Facebook for more information.

On that cold morning last Thursday, Ventimiglia guides the last horses backwards out of the trailer. A banner proclaims the welcoming slogan: “One mile, one day, or all the way!” Anyone can join the ride. Even if you have no experience. Like me.

Ventimiglia claims he didn’t have much riding experience himself until a few weeks ago. (He didn’t have much construction experience before dismantling the ski lodge, either.) He spent a few days getting comfortable riding Dakotah before the pair started out from Breckenridge on Sept. 19.

Now they’ve completed almost 100 miles, raising awareness about Pine Ridge along the way. This morning, a few curious commuters pull off the road. One asks how long the whole ride will take.

“About four and a half years, at this rate,” Ventimiglia jokes.

It’s hard to predict how long each stretch will take. This has made for difficult logistics. The Tipi Raisers have hired a driver to shuttle the trailer, and Ventimiglia knows where he’s stabling the horses for the night.

“We’re basically winging it,” he says. “We’re good through Cheyenne, [Wyo.]. North of there, there’s not much. I think it’ll be a lot of camping.”

He also expects to be riding most of these miles alone. He’s grateful that people have been reaching out via Facebook to offer hay and shelter.

Since I’m the least experienced rider in the group, Ventimiglia is explaining horse basics to me. Don’t be afraid, he says. Breathing helps.

I have a lot of experience with breathing. I think I’m going to be pretty good at this. I try feeding an apple to my multi-colored horse, DJ, who drenches my sleeve in fizzy green saliva.

We can hear the I-70 traffic as we trot down the road looking for the trailhead. DJ flinches as a truck goes by. Everyone is thrilled to get off the road. We ride through pines toward the Lookout Mountain Nature Center. But soon DJ is no longer on board. She stands motionless.

Eventually, the group circles back to me. “Kick her!” they shout. “Smack her on the rear end! No, don’t pet her, smack her!” DJ refuses to move. Or acknowledge me.

“Maybe it’s because you don’t have children,” says a fellow rider. Apparently, I lack the commanding presence instilled by parenting and horseback riding.

At the nature center, where the horses are petted by throngs of children, we gaze at maps. There is some confusion about which trail will actually take us to Golden. I vaguely remember biking up these switchbacks here once, I say. We start making our way down.

After a couple missed turns and some backtracking, the horses are carefully stepping down Chimney Gulch trail. Hikers ask more questions than bikers. Ventimiglia’s explanations grow shorter. He wishes he’d brought the brochures.

The reassembled lodge will be multi-purpose, he says. It could provide lodging for school groups visiting on community-service trips — groups that usually exit the rez after dark. Ventimiglia used to bring his students to the rez, when he ran a school for troubled youth. If the rez had a comfortable, safe lodge, students could spend the night there and learn more about Lakota culture.

And perhaps more importantly, Lakota youth could learn more about Lakota culture, says Ed Iron Cloud, who serves as the president of the Tipi Raisers.

“We’re struggling as Lakota people to regain our immeasurable way of life,” White Plume says. “So a lot of our young people aren’t connected to it. They don’t know the language, so it’s hard for them to grasp the meaning…. There’s a real-life battle going on right now.”

It is a battle with many casualties. “Due to the economics, a lot of our people are consuming a lot of tobacco, alcohol and sugar,” Iron Cloud says. “It’s an epidemic.”

The reservation receives commodity foods from the federal government. Flour, oil and sugar are much more available than fresh produce or the Lakota’s former staple, buffalo.

Diabetes, heart disease and tuberculosis strike the rez at rates several times the national rate. And alcohol is oddly accessible for a reservation that’s technically dry. Each year, 4.5 million cans of beer are sold in neighboring Whiteclay, Neb. (population: 14 people).

White Plume lost her son to a drunk driver when he was 14.

“People die at a young age here,” she says. “My prayer is that our children can live to be old men and old women. We want them to experience the blessings that come with graduating high school, going to college, having their first child.”

Life expectancy at Pine Ridge is commonly cited as the shortest in the Western hemisphere, except Haiti.

“As Lakota people, we have to call on our ancestors,” White Plume says. “We can access help from the spirit world. But we have to know the language.”

To stem the wave of alcoholism and suicide, Lakota youth must learn the old ways of calling for help, she explains. In the new lodge, they could practice. But the lodge is still a vision.

“That’s what we’re doing out there, with the ride,” he says. “Making allies.”

Allies are defined by mutual respect, he explains. For example, horses can be allies.

On the trail with Ventimiglia, this alliance seems tenuous. We approach a sharp switchback, but DJ sees a shortcut. She doesn’t care which way the reins are pulling. She’s determined to pass under this sharp tangle of long-dead branches. Unfortunately, I’m still on top of her. I lay down on her back, hoping to limbo safely underneath. But DJ is squeezing under it by just an inch, and I’m several inches thick. I brace myself for an abrasive tree encounter.

But suddenly, we stop. Not by choice. DJ lunges forward, but my belt buckle has gotten stuck in the trap of

White Plume says animals are viewed as our relatives, in Lakota culture. The Horse Nation can see through us, understand us and heal us.

DJ doesn’t want to carry me. She has made that clear.

A couple arduous hours later, even Ventimiglia and Dakotah’s alliance is tested. On the creek path in Golden, amidst joggers and baby strollers, we reach an underpass. Dakotah sees a puddle in the shadows. To avoid it, he tries to climb a five-foot-tall retaining wall. Ventimiglia manages to hang on even as his saddle becomes vertical.

“I guess we’ll go around,” Ventimiglia says, when Dakotah is standing on four legs again.

But the bridge over the troubling water proves equally spooky. Dakotah appears dangerously close to standing up on two legs again. DJ, however, has magically started listening to me. We take the lead, demonstrating to Dakotah that the bridge is safe. Horseshoes clanking, we all cross.

The next day, Ventimiglia picked up where we left off. And on Sunday, he rode the Greenbelt Plateau Trail into Boulder with his 16-year-old daughter, Sierra. (Ventimiglia lives in Lakewood, so during this local stretch, he’s able to go home to his family at night.)

Soon, it will likely be just Ventimiglia and the horses, traveling through the plains with a map and a mission.

You are welcome to join them. Ventimiglia had planned to ride though town this weekend, but the red tape got too complicated. Boulder city officials told him to talk to Parks and Open Space, who told him to talk to the police, who said he needed to hire an officer to escort him, which would cost $80 an hour. So he’s taking a loop around the city.

And then he’ll journey on, making allies along the way, like the Lakota.