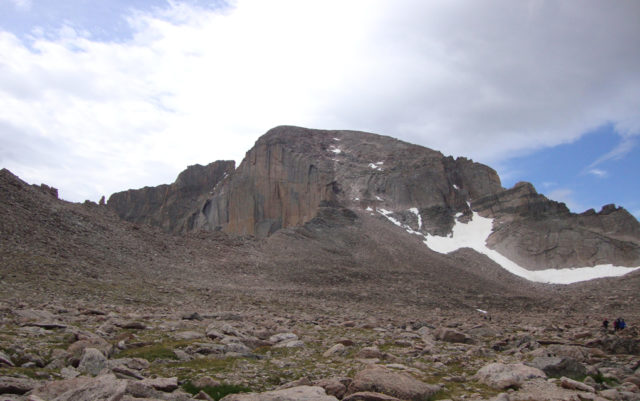 As I climbed the steps to Wayne’s condo, I expected him to be thrilled at my news. Wayne was an experienced Boulder climber, and here, on this momentous June day, I’d decided fate intended me to become a mountaineer. My new goal was one my friend would admire. Anyone could slog up 14ers like Grays Peak or Mount Sherman. A real mountaineer needed a real mountain, and I had settled on Longs Peak, the jewel of Rocky Mountain National Park, as my first conquest.

Settling back in his chair, Wayne peered down his nose and sighed. “Douglas, mountaineering represents the most severe test of judgment.” He sipped his beer. “You’re just out here from Chicago. Elevation, what, eight feet?”

“You’re going to encounter snow on the Ledges and Trough.”

“I’m renting an ice ax,” I said, countering his judgment. “What do you think about crampons?”

“You and crampons? Sweet Jesus, no,” he said.

A bit crestfallen at his response, I set out a week later and began my relationship with Longs. I enlisted another friend, Tim, also a transplant from the flatlands, to accompany me, and we arrived at the trailhead predawn, just as my dog-eared pamphlet recommended. When I tossed his rented ax into his hands, he recoiled as though he’d caught a rattlesnake.

“You might need that after the Keyhole,” I said.

Though unclear exactly what one did with such a utensil, I spoke authoritatively. Off we stumbled through the half-dark. At treeline we left the lodgepole pines behind and entered the tundra, our spirits climbing with the sun. Dawn light touched the heather with fire and illuminated every toehold on the Diamond, the 1,500-foot cliff forming Longs’ east face. Naysayers like Wayne might question our preparedness, but no one could dispute our perceived titanic physical strength. We sprang rock to rock, only occasionally pausing to suck down a full breath in the thinning air. We passed the Agnes Vaille Shelter, built to honor the first woman to complete a winter ascent of Longs, and then scrambled the final boulders below the Keyhole.

That moment provided an indication of the difficulties to follow. The Keyhole is an irregular opening eroded through to the peak’s west slopes, 20 feet high and overhung on its left by a weathered bar of rock. It bears a distressing resemblance to the Gates to Mordor. Behind it, dragon’s breath mist swept up from the canyon, obscuring the sunlight that had lifted our morale earlier. Nothing but swirling, ghostly air appeared beyond the rock cleft.

I crawled forward and peered under the overhanging rock, searching for the gaudy red and yellow bullseyes that supposedly marked the trail. Vertical granite blurred my vision. I slithered forward like a large, befuddled lizard. The world spun when I rocked back up on my knees.

A narrow ledge finally materialized before me. It led toward a faded red circle painted on a boulder an impossible distance away. The air darkened. In 10 steps, I was below the route. I instantly panicked, clawing my way up, not knowing if Tim followed me down and, frankly, not caring. I had my own worries now. Back on route, I soon confronted a drift slanted across the trail, its snow crystalline and hard-packed. Facing this hazard, I developed a mountaineering technique that may someday be named after me. I would hang one boot forward as if testing bath water until, at an intemperate, ill-defined moment, I just planted it and sprinted across the snow. Teetering along the Ledges, diving past the recurring drifts, the void tugged me toward Glacier Gorge a thousand feet below. Each time my nerve cracked and I recoiled from the abyss, my ax swung free on its tether and attempted to impale me.

The Ledges extended for several lifetimes before we reached the base of the Trough, a steep, 600-foot-high gulley. Several equally unskilled climbers had pooled there, and we inched past them to find the Trough packed with ice. If it’s true that courage is the ability to sally on despite one’s fear, at this point one might charitably fault us for an overabundance of courage. Though terrified to the point of blindness, I was stricken with heroic images of the ancient mountain greats: Mallory, Messner and Harrer. Would a dusting of snow have deterred those giants? I boldly announced our ice axes had found their purpose — we would chop steps for one another.

While the wondering crowd looked on, Tim and I alternated dropping to one knee and chiseling platforms in the ice an inch wide. At 50 feet up, sweat drenched us, and we gasped for breath. After 100 vertical feet, our arms ached. Our axes easily weighed 100 pounds. As one we looked to our forlorn track below, the Trough was a bobsled ride to oblivion. Wordlessly, on all fours, we lowered ourselves back the way we had come.

On the Ledges once again, I posed Tim with his back to the gulley. I raised my camera just in time to capture his grimacing face and a rock off the summit, falling soundlessly behind his head.

“What’s the matter?” he asked

Although this experience gave no indication I possessed any climbing ability whatsoever, I took Wayne’s advice and slogged up those easier 14ers I’d scorned earlier. Surprisingly, each peak seemed more exhilarating than the one before. During the next climbing season, I summited Longs without difficulty. Five years later, with several major peaks under my belt, I returned. I owed Tim a shot at the top, and I talked his 14-year-old son Jason into tagging along.

Once again we left the trees to find the heather glowing and the Diamond reflecting light. We moved fast, scarcely breaking stride at the Keyhole. Early on the Ledges, a rock clattered past, kicked loose by a woman lost already, scrambling over a boulder above.

“Come down from there,” I said, just like her dad. “You’ll kill yourself. The route goes from one bullseye to another.”

Maybe that moment, advising a person in the predicament I’d once been in, banished some psychic ghosts and explains what happened next. Suddenly I could stroll the Ledges with my eyes closed. My very soul knew, for yards ahead, where each hand and foot placement would land. I jogged a bit. The kid pressed right behind me, so I jogged a little farther. Time seemed infinite. I couldn’t fall, but if the inconceivable happened, I had forever to correct the misstep.

We only slowed when we met other climbers, and, like a crazed cult leader, I gathered a flock of the needy and suffering — a woman who’d missed the top the season before, a senior citizen, and Tim, now stricken with altitude sickness.

My method for managing my charges was simple. I dashed ahead with Jason, gave him directions, and then hustled back, goading and inspiring the others in turn:

“You OK? Just a bit more. Put your hand here and reach that corner and put your foot there and I’ll be back. No worries.”

I caught the woman in our makeshift group by the sleeve and negotiated her upwards. At the Trough, I tipped my chin at Jason, starting him toward the chockstone. Everyone else I cajoled up the scree. On the homestretch below the summit, I grabbed the wobbly-legged older gentleman by his jacket and dragged him along behind. In moments all of us were posing for pictures on top.

The descent unfolded in much the same manner. Without a conscious thought, my mind solved what had once been a Rubik’s Cube of boulders and slabs. Jason pressed on my heels, as though this bizarre mood were contagious, as though we shared the same dream. Below the Keyhole and Boulder Field, he broke into a trot, and I hustled after him. He beat me to the climbing register and signed us out with the comment, “WE ARE GODS!”

I couldn’t have captured the sensation more accurately myself.

Whenever I remember these experiences, I invariably wonder how a transformation like this occurs. Training is an answer, but training alone can’t recast a whimpering blob of protoplasm as Thor’s first cousin. By this point, I’d learned mental conditioning was 90-percent of mountaineering.

Since Longs I’ve summited 200 peaks without the miraculous godly high returning. At times on the trail, though, I play with an image instead of a rational explanation. It’s quite a satisfying one: as I swing under the Keyhole and step out above Glacier Gorge, a shimmer of light appears, barely visible among the granite slabs. Locked in my human failings, I pass beneath it, unaware. But in that moment, one of nature’s old gods rests a hand on my shoulder, allowing me the grace to soar as it once soared along the slopes of Longs Peak.