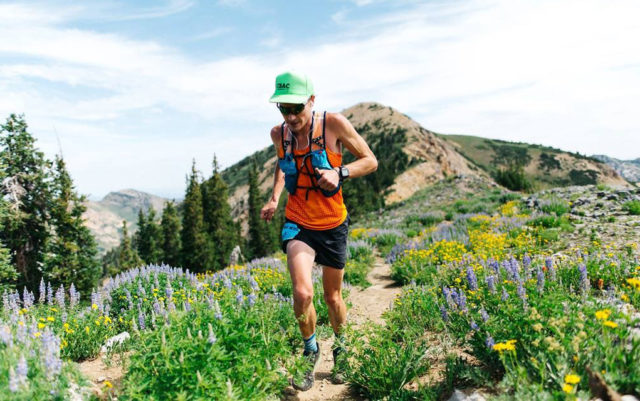 The dull beam of a headlamp bloomed in the dark as Sean Van Horn’s skis skidded to a stop at the bottom of Aspen’s Buttermilk ski hill.

Van Horn collapsed onto the spring snow. He was 14 hours into a 24-hour attempt to break the North American vertical record for skiing. That meant over 40 laps up and down the Tiehack run for 63,000 feet in just one day. It had been a long day, going up and down on skinny race skis.

As he lay in the snow, Van Horn began to shiver and hyperventilate. His wife, Kylee, hoisted him by the arms and carried him into the patrol hut where he curled into a ball and fought back tears.

“I’m sorry, I’m so sorry,” were the only words he could muster between labored gasps for air.

Van Horn, 32, is no stranger to suffering. As an endurance athlete with ultrarunning, cycling and skimo (ski mountaineering) accolades, the North American vertical ski record was just another event in a series of endurance missions for Van Horn. The original record was set by skimo legend Mike Foote last year in Whitefish, Montana, at an elevation almost 4,000 feet lower than Buttermilk. The record is the vertical equivalent of skiing up Everest from sea level to summit and back.

It wasn’t Van Horn’s desire to suffer that prompted the record-breaking attempt, but rather his journey to free himself from suffering. The main goal of his spring ski was to raise awareness of mental illness and raise money for Aspen Strong, a nonprofit in the Roaring Fork Valley that provides mental health care services.

Van Horn has struggled with mental illness since high school. Cycles of depression led to addictive behaviors, and he self-medicated with heavy marijuana use and endurance sports.

“I struggled a lot when I was young,” Van Horn says. “Endurance sports were a saving grace for me, they helped shift addictive and obsessive behaviors into something more positive.”

He trained. He got good — fast. He started riding two to five hours each day, and rode in the Junior World Cups. He went on to compete on CU Boulder’s collegiate cycling team. But inside, he was still struggling.

Unchecked depression had begun to mingle with excessive exercise and disordered eating. A back injury took him out of cycling, prompting obsessive tendencies to become full-blown eating disorders, exacerbated by his depression.

“I was on the verge of starvation, and completely out of control,” says Van Horn.

Athletes, particularly those that participate in sports that emphasize speed and svelte physique, like the spandex-intensive skimo and ultra running where Van Horn competes, are especially susceptible to eating disorders. In a study by the National Eating Disorders Association, male athletes were 38 percent more likely to develop bulimia, and 10 percent more likely to be anorexic than the general population. It’s estimated that eating disorders in men are underreported. These numbers likely don’t represent the full reality that men in endurance sports confront: the pressure to have an idealized physical body and tough-guy mentality.

Unable to bike because of his back injury, Van Horn picked up running as a way to cope with his internal struggles. He would go on back to back 20-mile runs in the Boulder foothills without eating. Then, starving, he’d lock himself in his room to eat.

Van Horn knew that he was in trouble. The cycles of deprivation, over-training and then bingeing were wearing on him. The loss of control scared him. He felt isolated and ashamed, out of place compared to the elite athletes around him. Everyone on social media was so fit, and so happy — why wasn’t he?

He decided to get help. He started seeing a therapist. He started training more seriously for running, channeling some compulsive tendencies into a more regimented schedule that mandated days off, and a well-rounded diet. He eventually moved to Carbondale, where he now lives.

He began to speak out about his depression and eating disorders and found that many friends and teammates had identical struggles. Van Horn began to understand his own mental illness as a sickness, not a character flaw.

“Everyone has their struggles and their battles,” he says. “Hearing other athlete’s stories encouraged me to seek help, and connect with others going through similar things.”

On the floor of the ski hut, Van Horn lay huddled, his head in Kylee’s lap. He thought about the lows he’d reached before. He thought about Kylee and all the people he’d shared his story with. He took deep, calming breaths. He nibbled on a cheeseless pizza.

Reflecting on his mission to bring awareness to mental health, he stood up, ready to ski again.

Even though his back was aching and his feet were covered with blisters, Van Horn skied on.

And so Van Horn skied for 24 hours straight. After a few, slower laps to start, he began to gain momentum. Friends that he’d shared his story with flocked to the ski hill to accompany him on his final laps, moving in a line across the ski hill.

In the end, he was just a couple hundred feet short of the record. But for Van Horn, it was anything but a failure.

“I learned that sharing your story is always a worthwhile endeavor,” he says. “I think many of us are longing for connection in this world, and all too often we guard our imperfections when in reality those shared defects are often what unite us. I learned that I can dig a hell of a lot deeper than I ever thought.”

He raised over $10,000 for Aspen Strong and shared his story with hundreds of people, many of whom took the time to share how profoundly his story had impacted them.

“I learned that I’m not alone,” he says, “and that a lot of other people in my community that I respect have dealt with similar mental health struggles.”