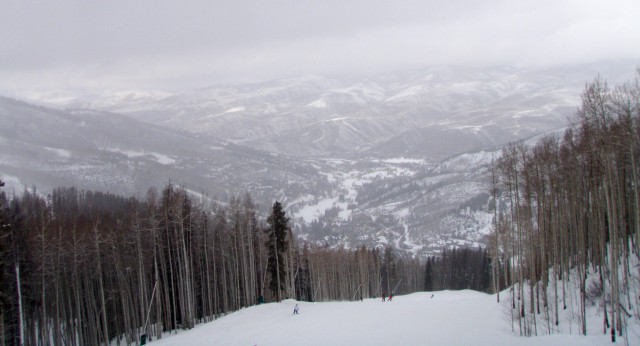 In less than three hours, we’d covered nearly a horizontal
mile of terrain. We’d enjoyed speedy lift lines, wide-open runs, and were left
breathless from the views. All before a mid-afternoon, mid-mountain lunch.

Yes, Beaver Creek – a two-and-a-half hour drive west of
Boulder along I-70 – was impressive.

Reminiscent of small Austrian ski towns, Beaver Creek itself
is a draw. Secluded but not removed, the town is tucked away from I-70 in a
canyon of sorts. Parking ($33 a day) is a bit pricy, but is easy enough, and
heated garages are offered.

Tickets (at $97 a pop) are also a bit on the expensive side,
and some restaurants and shops in Beaver Creek also tend to be pricy, but the
shop owners and the resorts employees aren’t pretentious. The town is
welcoming, and its staff is hospitable.

There is a large ski and snowboard school, which caters to
all ages. Prices are dependent upon age and date of arrival. (Lessons can be
booked online at BeaverCreek.com.)

The resort itself sits on three villages: Beaver Creek,
Bachelor Gulch and Arrowhead Village. Twenty-five lifts service 149 runs – of
which 146 were open when we went exploring. The terrain is varied and
challenging enough for experts while still being friendly to beginners.

What separates Beaver Creek, though, is that the varied
terrain remains throughout all elevations. At the top of the resort’s tallest
peak, which stretches to 11,440 feet and is serviced by two lifts, skiers and
riders can choose to head left and take greens and blues down to the base, or
take a right and have their choice of double black diamonds. (It’s here that
the infamous Birds of Prey downhill course, site of the 1999 World Alpine Ski
Championships, starts.)

All the while – at least when we were there in early
February – you feel like you’re skiing on a private mountain. Other skiers are
few and far between, and lift wait times rarely reach five minutes.

After hitting the mountain at 10 a.m., we wanted to go up.
All the way up. So we caught the Centennial Express lift and moseyed on over to
the Cinch Express a few feet over – though not before admiring the Crystal
Grotto, a mid-mountain Igloo that plays host to a variety of concerts. (More on the Grotto, here.)

Once at the peak, we conferred and decided that it might not
be best to start the day with an expert run, so we made our way down Jack
Rabbit Alley, a blue, transferred to Cinch, a green, and then continued on down
Gold Dust, another blue, to the bottom. While the runs weren’t rich with power,
they weren’t icy, either.

Best of all, there was hardly another skier or rider to be
mindful of. Unlike some of Colorado’s other mountains, we made our way down
without feeling like we were going to get run over.

From the base, the terrain can look a bit intimidating.
Peaks spurt up around you in all directions. To the left, Grouse Mountain
towers. To the right, Larkspur Bowl and Arrowhead Mountain await.

This fact, coupled with lunch plans on Bachelor Gulch, actually
helped seal our next plan of attack: we went back up Centennial Express, but
took a right this time, down a fun but challenging blue, Golden Eagle. From
there, it was up the Larkspur Express, to the top of Larkspur Bowl.

It was here that we ran into our main beef with Beaver
Creek: the abundance of catwalks. We thought we’d take Primrose, which appeared
to be a blue, to the top of Bachelor Gulch. Quickly, though, we realized that
it became a catwalk for most of the run, and we were stuck poling and skating
our way over.

Still, the scenery here changed dramatically. Aspen trees
replaced the pines, which cover most of the east side of the resort, and in
front of us, the mountain opened up to the fog-covered valley below.

Finally, a little exhausted, and after some confusion of
finding the mid-mountain restaurant, we made our way to Zach’s Cabin, a private
reservations-only lodge where you can store all your gear in cubbies, take off
your ski boots and lounge around in slippers.

When we arrived, we were surprised at the abundance of
showshoers, who told us how perfect the conditions were for the sport. Beaver
Creek has 32-kilometers of cross-country skiing and showshoeing trails in the
McCoy Park Nordic Center.

It had been lightly snowing for most of the morning, but
things really picked up after lunch. We’re talking white-out conditions. But we
never got cold. The fact that the mountain is entrenched in a canyon shields
the slopes from wind.

On the recommendation of a friend, we quickly tried a few
runs on Arrowhead, which was probably the most secluded spot of the resort. The
runs weave themselves through residential areas.

From there, we hit the lone lift left to check off our list:
The Birds of Prey Express. By then, visibility was pretty dicey – probably 15-feet,
at most – so we decided to call it a day and head in. After all, apr%uFFFDs-ski was
calling our name from The Osprey, a hotel at the bottom of the Strawberry Park
Express lift.