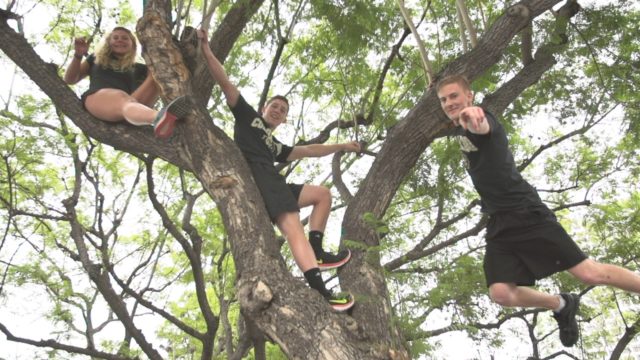 At 16, Bobby Reedy knew he wanted to be a ninja — a ninja warrior, that is. To help him become a contestant on the beloved obstacle course show American Ninja Warrior, Reedy’s stepfather helped the teenager build some of the iconic obstacles from the show in their backyard, like the finger-cramping cliffhanger and the core-crunching salmon ladder. While training, Reedy sent numerous audition videos to the show over the years.

Finally, as a junior at the University of Colorado Boulder, Reedy will get his chance to become a ninja, joining two fellow CU students for a special five-episode program called Team Ninja Warrior: College Madness.

Spawned from the popularity of American Ninja Warrior, Team Ninja Warrior pits 24 teams of three members each against one another and the obstacle course to gain points.

This incarnation of the show takes classic college rivalries off the football field and basketball courts and into the haphazard world of extreme obstacle courses. Joining Reedy in representing CU are Matt Normile and Alexandra Regenold.

Reedy, perhaps in a poetic tip of the hat to his longtime love of the show, is team captain for the CU students. The junior is studying political science and is looking toward law school after he gets his undergraduate degree, and eventually a career in the law profession.

“I mean for me, it’s been a long journey since I started when I was 16, really training for the show,” he says. “I don’t know, it’s just a big passion of mine when I was in high school, and eventually built up to this bigger thing.”

Reedy was a kicker and punter for his high school football team, something he believes helped him build the agility, endurance and speed it takes to navigate the hairy obstacles of a Ninja Warrior course.

After moving from Chicago to Boulder for college, Reedy took up rock climbing to keep up with his upper body strength training.

Like Reedy, fellow team member Alexandra Regenold has a passion for climbing, providing the upper body strength necessary to tackle the course.

Regenold is the sole female member of the team. The Iowa native is a senior working on a degree in English, who hopes to teach elementary school once she is done with her undergraduate studies.

Before Regenold was asked to compete in Team Ninja Warrior: College Madness, she sent in an audition video to the regular season of American Ninja Warrior after seeing a friend do the same.

“It’s pretty uncharacteristic of me to do something like this,” Regenold admits.

She didn’t make the cut for American Ninja Warrior — something that didn’t surprise her — but she got a call back about participating in the college version with a guy from CU “who’s a superfan.”

“Which was Bobby [Reedy],” Regenold says. “And so then they got us in contact.”

Rounding out the three-member team is Matt Normile, a Colorado native from Monument. The junior is studying aerospace engineering. His background, perhaps unsurprisingly, is also in climbing.

“I wasn’t really good at all the hopping, stuff like that,” he says. “That scared the crap out of me.”

For Normile, climbing is a sport he has had less time for these days since his busy schedule keeps him occupied. But he has found a renewed interest in the popular Boulder pastime since being chosen for the competition.

“[I] kind of lost that interest in climbing coming to college just because I was so busy. I kind of stopped doing it all together,” he says. “But starting to train for this show I regained that interest, and I’ve actually been doing it almost every day since the show, so I was really glad to get that passion back.”

Reedy and Normile are both members of the CU chapter of Alpha Sigma Phi. Reedy asked his fraternity brothers if they were interested in sending in tryout videos, and a few members did, but it was only Normile who was chosen to be on the show. Normile and Reedy had climbed together prior to being on the show, but the pair only met Regenold during their last minute training.

To prepare, the three CU students practiced at gyms and courses specifically designed to mimic the obstacles found in the Ninja Warrior series.

As part of their last-minute training, they worked out together at the Warrior Playground, a gym in Longmont, that has some of the classic Ninja Warrior obstacles.

They also trained together at a parkour specialized gym in Boulder that features various strength and movement training obstacles.

“They’ve got open gym on Mondays and Wednesdays, and they’ve got a really sketchy warped wall there and then a trampoline and a pit and it was cool. It was a fun time,” Regenold says.

Not only did the students train in gyms, but also at the home courses of previous American Ninja Warrior competitors.

“I went up to Brian Arnold’s place in Fort Collins, and he and [Ian] Dory, who has also been on the show …  and I trained.  [It] was horrifying because they’re amazing. They’re insane,” Regenold says. “They … were training for [Team Ninja Warrior] too. So it was like speed trials, and we’d have to sprint around the house, and then there’s a garage door sliver that we had to jump on and run across, and PVC pipe that we were running across, and ropes we were swinging from. They had so much stuff, it was kind of crazy.”

After training, the student competitors flew to Los Angeles, California, where they stayed for a long weekend to film the competition.

“It was really fun. It was a free vacation, they paid for everything,” Normile says.

“It was so fun. I didn’t know what to expect,” Regenold adds.

During their time in California, the three CU students ran the course in a head-to-head battle with a student from Stanford who had been matched against them. The competition worked like this: Each member of the team is worth one point, except for the team captain who is worth two, and goes last. To score points, the team member must beat the course faster than the person they are racing, and the team with the most points is able to move on to the next round, the relay part of the course and the finals. In that respect, it’s like in a regular Team Ninja Warrior tournament.

“Very passionate people, it was a true blessing being around some of the top athletes from across the country, all representing their schools. It was a really good experience, humbling experience for us too, knowing that we got to represent CU,” Reedy says.

But the students took away much more than that.

“Just seeing a lot of people who were so passionate about what they were doing, that that’s kind of like how they define who they are … that was just so cool for me,” Normile says. “It just made me really think about like how there’s a lot of people over there who would just love to live in Boulder because they were rock climbers, and I just kind of realized, ‘Wow, I’m kind of like living their dream right now.’”

For Regenold, new friendships were a key takeaway.

“I’ve always done really poorly in competitions just because I psych myself out a lot,” Regenold says. “One thing that I loved about this was the fact that even once the show was [filming], it was literally like running next to your friends.”

And for someone like Reedy, who has been a fan of the show since he was a teenager, a long-held dream become a reality.

“Since I’ve been training for so long … there’s always been that question of how well I do or what the actual course will be like, and being there and seeing the course was just a whole new experience.” he says. “I’ve been to gyms all across the country, but it’s nothing like being at the actual obstacle course, seeing it, being there.”

The competitors ran into the warped wall on their course, along with other difficult obstacles, like floating tiles, a rope swing and suspended poles.

Perhaps Normile sums it up best:

“That was unreal,” he says. “When I first saw the obstacle course I was like, ‘Holy shit, this is actually it.’”