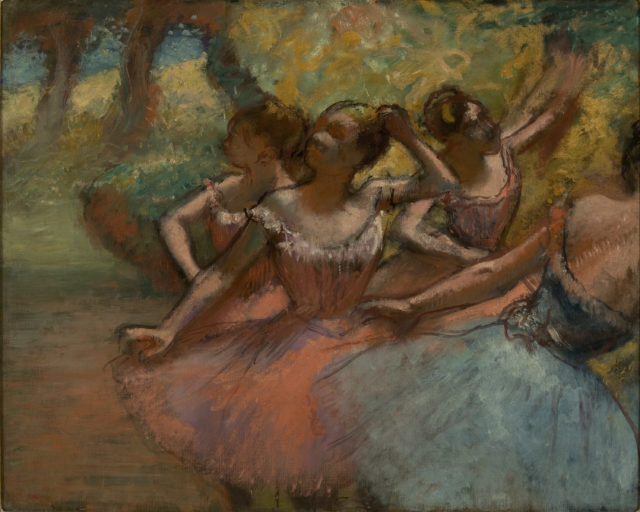 Many artists have a trademark. For Monet it was water lilies, Warhol favored soup cans, and Picasso was partial to the rearranged face. But most artists’ legacies are more complex than the signature they leave on the world of art. While French impressionist Edgar Degas is known mainly for his images of delicate dancers, there was much more to the man behind the canvas.

An exploration of the artist is the focus of the latest exhibit, Degas: A Passion for Perfection, now showing through May 20 at Denver Art Museum (DAM). Degas died in 1917 at the age of 83, and his artistic career lasted more than half a century. Passion for Perfection gives viewers a look into that prolific career, featuring Degas’ drawings, sculptures, prints, inspirations and paintings. It follows his early beginnings, after he traded the pursuit of a law degree for a paint brush, all the way to his final days.

“We put speed bumps throughout the exhibition. We start off with what you know, then we subvert everybody and then show you what you don’t know,” Standring says. “And that should help everybody understand that it’s not entirely about dancing, but it’s about art-making.”

Degas was a man of contradictions and while he exhibited with other impressionists, he also wanted to claim himself as an independent. He craved fame, but also coveted the time spent alone in his studio. He trained as an academic painter, yet his work is far from stiff. And he constantly blurred the lines between media, never committing himself to one approach. This resulted in an interesting personality.

“He was the sort of dinner guest that you’d love to invite because he was so intellectually acute, and had a really fabulous critical sensibility, but at the same time he would insult everybody,” Standring says. “Then the next morning he might run into you and say, ‘I was so happy to see you at dinner last night,’ even after he completely destroyed that same person.”

More so than the personality, Passion for Perfection highlights the process of the artist. For Degas, the craft was just as important as the final subject. Standring calls Degas an “artist’s artist,” as the painter left information on the canvas for others to analyze.

“That’s the content of Degas’ work: process,” he says. “To the broader public, [some of his work] might look unfinished. But in my mind he stopped judiciously instead of over-laboring the work itself. And by showing his process, that’s what Degas wanted to communicate.”

An example Standring cites is “At the Cafe.” In the painting, two women sit next to each other, and while the figures are clear, they are surrounded by abstract brush strokes that lack formal composition.

“They’re having a discussion in a cafe, and he’s captured that intimacy between the two women stunningly well, and yet it’s quite abstract in the foreground and in the background,” Standring says. “Are they sitting at a counter? Are they in a cafe? Are they outside? Are there flowers in the foreground? Just that sensibility of grazing touches of the brushes across the surface, is to me, highly stimulating.”

Degas limited his paintings to only a few topics — mainly landscapes, horses, public scenes, nudes and dancers. By keeping his range tight, he was able to hone his craft. Throughout his preferred themes, he frequently repeated poses, allowing him to focus on process and technique rather than the subject matter.

“He stuck to the repetition of various motifs. That gave him the opportunity to redo these different works, as he wished, to his own satisfaction,” Standring says.

Notably, Degas was drawn to motion. This was clear in his love of dancers, as well as his fascination with horses. Degas was a problem-solver, and capturing the fleeting nature of movement was one of his lifelong quests.

His work also leaned toward abstraction. He played with bold compositional aspects, particularly how he set characters in the frame. In “Dance Examination,” for example, Degas lumps three figures in one corner and frames the fourth figure in empty space. Compositions like this were audacious for the time period. While Degas never completely left representation, he was ahead of his time, with Picasso and others following soon after.

In the last gallery of the DAM exhibition, Degas is described as “Poetic and Scientific,” a duality that fully encapsulates the artist. Passion for Perfection refers to Degas’ studio as his laboratory, a space for tinkering with various methodologies and materials. It’s clear Degas had a restless energy and insatiable thirst for understanding.

“Coming away from reading about Degas, I think he had an IQ up there in the Mensa world. That, and he found the broader public just boring. That’s what turned him into such a curmudgeon,” Standring says with a laugh.

Degas called making art a “series of operations.” For his sculpture work, Degas used wax, clay, plaster and bronze. He used the medium to study movement, and many pieces are balancing on one leg. To make these, Degas frequently improvised with different support structures made from objects lying around his studio.

He worked with oil paint, pastels, chalk, watercolor, graphite, charcoal, ink, gouache and more. He mixed these mediums and created his own concoctions. This resulted in many of his works blurring the line between drawing and painting.

“The scientific mode for Degas was curious, investigative, trial and error,” Standring says. “The poetic mode is how he puts all of those experiments together to create something quite astonishing.”

With such logic and inventiveness, one could assume Degas would end up producing straightforward works. Instead, his hand translated his mind’s operations into soft, elegant paintings that evoke emotion. And while most of the rhetoric about Degas focuses on his final product, Passion for Perfection details the artist’s process, adding more layers of complexity to Degas’ repertoire.

While the word “perfect” can suggest a high degree of finish and polish, the DAM’s show examines another side of perfection and what the word might have meant to the artist.

“In our sense, Passion for Perfection could have been a passion for his own satisfaction,” he says. “We really wanted to give an idea that Degas didn’t like closure at all. He wanted to continue his mark making throughout his entire career.”

According to Standring, Degas once said he would rather “work a ball of wax to make a figurine and then destroy it and rework it, than receive a bag of diamonds.”

For Degas, if the process of creation was perfection, it stands to reason the artist lived a perfect life.