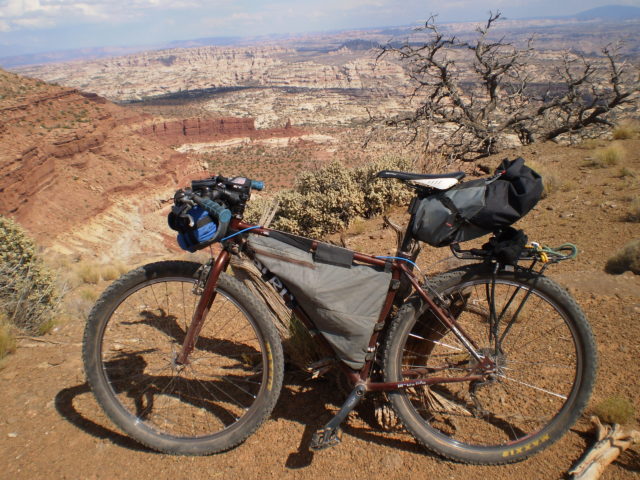 It’s late morning, and the temperature’s already in the 80s — typical autumn weather for Utah. I cram enough food for a small Boy Scouts troop and four gallons of water into the packs under the seat, frame and handlebars of my rental Surly Karate Monkey mountain bike. Next, I bungee my tent and sleeping bag onto the rack over the rear wheel and jam the rest of my clothes and other indispensables into my frame pack. All told, I’ve got about 40 pounds on the bike and another 40 on my back.

Immediately, the stone-studded Flint Trail — the first leg of my three-day excursion — drops downhill, and the Maze District opens up 1,000 feet below like a drained seabed, all flats, shelves and upthrusts as far as the eye can see. The grade is so steep I ride the brakes to keep myself from careening off the sheer edge onto the next switchback 50 feet below me, as the road winds like a dusty rattlesnake past juniper and pinyon pine to the valley floor.

The Maze District of Utah’s Canyonlands National Park is one of the most dangerous destinations in the U.S. The rugged terrain, punishing temperature fluctuations, and sheer, utter remoteness keep all but a fraction of the greater Park’s half-million annual visitors from risking their necks in this secluded land of slot canyons and dry washes, cliff faces and standing stones.

Directions to the Maze: Take the Hanksville, Utah, exit off I-70, follow Highway 24 south for 50 miles, then hang a left to churn along a washed out, sandy road for another 50 until you reach the Hans Flat Ranger Station, the most remote National Park Service facility in the lower 48. From there, buck along another 14 miles of bedrock “road” at an average 5 miles per hour and — unless you’ve got a 4×4 vehicle, mountain bike or mule — you’ve reached the end of your journey.

However, if you keep going, the Flint Trail plummets you 800 feet down over the first mile to deposit you smack-dab in a betwitching stonescape of dizzying cinnamon cliffs, scabby boulders, and beneath it all: the red earth, cracked and shattered like a gargantuan lobster’s shell smashed by a colossal hammer.

Jeep trails and barely-marked hiking routes thread you deeper into the Maze, where you pass features such as the Chocolate Drops’ steep slabs, the Coyote and Roadrunner hoodoos of the Land of Standing Rocks, and — 30 miles later — the Doll House and its fairytale spires.

As isolated as the Maze is, with hardly any water besides the nearly inaccessible Colorado River, no one in his or her right mind should go out there. And certainly not on a bicycle. And definitely not alone. But I didn’t get the memo.

After a half hour of pure downhill on the Flint Trail, the road levels out to cut through some low hills and I pedal along, hunched over from my pack, my perineum smushed against the plastic saddle (you should know the tip of my penis felt numb for the days that followed). I realize if I stop short, the momentum may very well toss me head over heels, though with some luck I’ll land safely on my pack like a tortoise on its shell.

Two miles later, I take a left at a junction and, after another two, reach the Golden Stairs campsite, where I break down the bike and set up my tent in the caramel sand among gnarled junipers and pinyon pines.

On foot now, I follow cairns through dwarf woods until I reach a narrow stretch of white rock called China Neck. Like I were on a desert runway, 800-foot cliffs drop off on either side of the rock — to the west it falls into the purple, mauve and pale yellow humps and fins of Ernie’s Country; to the east is the deep cleft of the Colorado River, and further off, the more frequented Needles District (a few dozen miles as the crow flies, over 200 by road).

The next morning, after a quick breakfast, I pack up the bike with my day supplies and set off toward Maze Overlook, 12.3 miles away, planning to return to Golden Stairs again for tonight’s sleep. It’s hotter than the day before — in the low 90s — the sun glaring at me like a bloodshot eye as I pedal along the alternatingly rocky, rutted and sandy road.

After an hour, I cross a dry streambed known as Big Spring Wash and, sweating through every article of clothing from my bandanna down to my socks, figure it’s time to get out of the sun for a bit. I push the bike through deep ochre sand and sit on a rock shelf under the shade of a 30-foot cliff. As I sip water and munch potato chips, I recall my conversation the previous day with the Ranger at Hans Flat.

“Been two deaths in the Park over the last two weeks,” the Ranger — a sun-browned woman in her late 40s — said as she filled out my permit.

“In the Maze?” I hadn’t heard of any deaths down there.

“Island in the Sky,” she replied, referring to the Park’s most popular district, where I’d previously seen scores of elderly and less-than-fit people exerting themselves under a treacherous sun. “We did have an incident out here last week with a backpacker who got lost, ran out of water, and had to be evacuated,” she added.

“Wow.” I feigned awe, unsure why she was telling me this. “Another reason to never go off trail.”

She inquired about my route and I laid it out for her. “Speaking of Maze Overlook,” she said, frowning, “I was out there the other day with an intern and even though she had been drinking plenty of water, she started showing the first signs of heat exhaustion.”

The point of the story wasn’t clear, but I pretended to ponder it. She wrote down a description of my clothes and the color of my tent. Then she asked to take a picture of the soles of my boots, presumably to track me in case I got lost.

“All about safety,” she said, the lines deepening on her forehead as she held up the camera.

The Ranger’s scare tactics hadn’t worked at the time, but as I sit in the shade watching the sandstone hills bake in the sun, distorting the air above them, I feel a creeping sense of unease.

While I’ve explored plenty of deserts over the years, I’ve almost always done so on foot, which requires less exertion than churning a heavy bike up slopes and through sand. I imagine a little cloud cover would help, but the sky is naked blue.

I guzzle more water and look at my map: I’ve only gone a pathetic five miles from Golden Stairs. Which means roughly another five to Maze Overlook, followed by a mile-long steep decline on foot and another two to the Harvest Scene petroglyphs. Then the return hike and 10-mile pedal back to the campsite — a trek, but I’ve done far worse.

I lounge on the rock, rusty cliffs rising a few hundred yards away like the hulls of capsized sea tankers. I feel pretty good, except for a sour taste in my mouth. It occurs to me that it might be the onset of heat exhaustion — my heart fires off, what if… — but then I remember I forgot to brush my teeth.

False alarm, sure, but I take it as a good reminder to refresh my memory with the actual symptoms. I whip out my Wilderness Medical Association Field Guide and open to the section on “Heat Problems,” which informs me that sweat losses can “easily exceed two liters per hour during moderate exercise in hot environments.” No problem: As long as I keep hydrating and replenishing my salts, I’ll be fine.

Except, it goes on to explain, that heat stroke — “a severe, life-threatening rise in body temperature” — isn’t always preceded by heat exhaustion. And I’ve still got a total of seven hours to go through this demon hatchery of a landscape incubated by the scorching bulb of an unrelenting sun.

I blink and hear my eyelids rasp as they cling and uncling like Velcro.

If I get heat stroke out here and have the clarity of mind to send out an SOS via my satellite messenger, the estimated best-case scenario would be a few hours before help could arrive and — short of an airlift — another four before I get to the hospital. Barring that, a slow and unpleasant death.

Of course all that’s silly: I’ve wandered deserts for years and never even felt faint. The well-meaning Ranger simply planted a seed of doubt in my brain, which, despite the lack of moisture, sprouted into a paranoid fruit ripe for the plucking.

A chipmunk squeezes out from a hole in the rock, racing from shadow to shadow to perch on the branch of a pinyon pine. Hmm, even the locals know enough to stay out of the sun today. All at once, my confidence leaks out of me like air from a busted bike tire.

As much as I want to penetrate further into the Maze’s adobe heart, the sun’s rays are so powerful that they appear to be stripping the red from the rock like paint thinner. I’m fit and I’m trained and got everything I need, but this far from civilization, this time of year, I just might be out of my element. All alone, there’s no room for error — one misstep and I’m toast. Literally.

I take another sip of water and ask myself if this is really how I want to die.

Back at the Golden Stairs that evening, I sit my sore ass on a rock and watch the sun set like a hunk of molten iron through a welder’s mask. Listening to the scissor snaps of crickets, I feel like a coward, loser and wimp rolled up in one. I’m ashamed because I bailed. I never made it to Maze Overlook.

A desert cottontail hops out from under a juniper and side-eyes me from a few feet away, ears erect like flags on a mailbox. It occurs to me that this critter doesn’t see itself at the Golden Stairs campsite in the Maze District of Canyonlands National Park in the State of Utah in the southwestern United States on the continent of North America on planet Earth. It’s just here — always here — the only place that ever was, the only place that could ever be.

Indeed, we’re the only species with the compulsion to name places in nature — be it a canyon, mountain range or ocean — and in so doing, we simultaneously, paradoxically, lay claim to it while making a clear distinction between it and ourselves. It dawns on me that my fixation with Maze Overlook was less about experiencing the location itself and more about this need to conquer, to hold myself apart and above.

That’s when I realize it was OK that I’d turned back. That the ultimate goal of my excursions isn’t to get anywhere in particular, but to immerse myself in the few blank spaces left on the map, so I can remember what it feels like — if only for a moment — to be a part of “here,” the land from which I came, and to which I’ll one day return (hopefully later than sooner, and not as burnt toast).