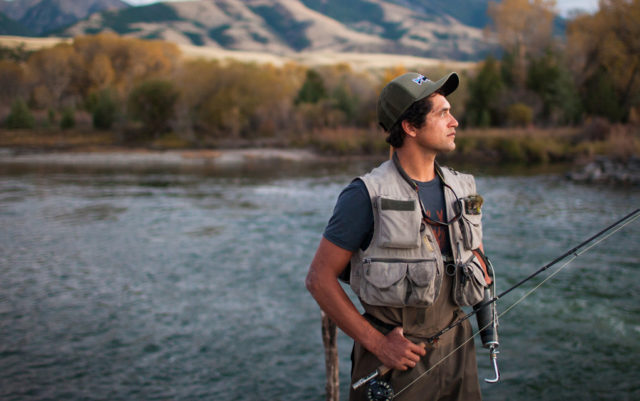 Eduardo Garcia was born curious. It’s a curiosity that led him to explore “the coulees and sage flats” of his native southwest Montana as a young child, as well as travel the world as a private yacht chef. But it’s a curiosity that also left him laying in the middle of the backcountry alone, significantly injured and barely alive.

From an early age Garcia spent the majority of his time in the outdoors surrounding his family home near Yellowstone.

“For me, the creeks and the draws and drainages and the peaks that we grew up looking at, those were always our play pens,” he says.

Along with the trial and error exploration of his childhood, Garcia mastered the essentials of survival through his time in the Boy Scouts, learning how to make a shelter, build a fire, even cook a rabbit.

“Being a Boy Scout is that ultimate lost boy experience,” he says. “You’re just begging for school to end and family chores to end so you can just go run around,” he says.

His childhood wasn’t without problems, though. He was kicked out of nine different schools and started using drugs and alcohol as an early teen, around the same time he met his father for the first time. Despite these challenges, Garcia graduated culinary school and became a private yacht chef, bringing along his natural curiosity and thirst for adventure.

Garcia spent the next 10 years on the water, before returning home to Montana to focus on a burgeoning seasoning and sauce company, and settle into himself a little more.

One early morning in the fall of 2011, Garcia set out bow hunting in the familiar backcountry near his home. He spotted an antelope buck in a field, but kept walking. Just before noon he came across a metal barrel, half buried in the ground. Peering inside, a decomposing bear carcass drew his curiosity. He took out his knife to explore. What he didn’t know was that the carcass was covering a neglected electrical junction box, and Garcia was jolted with 2,400 volts of electricity.

He doesn’t remember waking up on the forest floor or really much of what happened next, but his body kicked into survival mode and he began walking to get help.

“Somewhere an hour or so later, after stumbling around, I started to recall where I was, why I was there and then piece back together potentially what had happened,” he says. “I remember seeing that antelope buck again on my way down and noting it. … And it kind of helped bring me back to where I was. Seeing that buck was like, ‘Oh yeah, shit, I saw that thing this morning so I must be… what was I doing this morning?”

While Garcia slowly began to recall the events of the day, he remained completely unaware of the extent of his injuries.

“What I was not aware of was how damaged I was, how close to being dead I was,” he says.

He walked three miles and roughly two hours before coming upon a house. He was immediately air-evaced to Salt Lake City’s Burn Trauma ICU, where he spent the next 48 days. He had nine exit wounds that left gaping holes in the top of his head, the left side of his chest and his left thigh.

Throughout his recovery, Garcia maintained his natural optimism, and film clips from his time in the hospital are now part of a new documentary, Charged: The Eduardo Garcia Story screening at eTown Hall on Aug. 23 followed by  a Q&A with Garcia.

“I felt I had a job. I couldn’t do much,” Garcia says. “I couldn’t even pick my nose, and I thought, well, what actually can I do to be an active part of this team here? I can smile, I can kind of twinkle my eyes at everyone and just let them know that I’m grateful and I appreciate everything everyone is doing here. And I’m going to try my best to just fight on the inside.”

But there were rough moments. The doctors weren’t able to save his left hand and they had to remove his left testis, where they discovered something else. Garcia had stage 2 testicular cancer.

“You wake up an amputee and that’s a pretty big pill to swallow, a pretty big thing to deal with,” he says. But the cancer really felt more like an “inconvenience.” He was halfway through his surgeries and after significant testing, Garcia says, doctors found no trace of cancer outside of the removed testis. Still, they prescribed three months of chemotherapy, which put the rest of his recovery on hold.

“Patients are not subjected to chemotherapy when they have open wounds,” Garcia says the doctors told him. “So the first step is to have all of your wounds close up. It’s like building a house, not being done with the house but there’s a storm coming, we just need to protect the home as best we can and we’ll get back to building later.”

All in all he underwent 21 different surgeries during his recovery. He lost significant muscle mass in the “entire left quadrant” of his body. Doctors detached his left latissimus muscle from his hip and swung it over his chest to cover the hole left by lost abdominal, oblique and pectoral muscles. He lost “a chunk” of his left quadricep and four ribs. But despite all this, Garcia hasn’t really slowed down.

“What’s impressive and crazy is all these other muscles that kick into gear … the little muscles that you use when the big ones are no longer present,” he says. “I still row a drift boat and I’m aware that my left side is not as strong as my right side, but it’s stronger than when I came out of the ICU because I use it and those little muscles are in shape.”

Now, several years later, he wakeboards, surfs and swims. He continues to hunt, rock climb and flyfish in the backcountry of Montana. His curiosity continues, and he’s “still out picking up rocks and looking under things.” But to this day, the simple act of hiking is the most therapeutic activity he does.

“It requires the heart to pump and the mind to work and all the vital organs to be in place. That most elemental thing, which is the body working,” he says. “Hiking is the simplest form of recreation as long as you have the body and mind and you can locomote, then you’re out having fun. For me, the most simple reminder of where I’ve been and what I’ve gone through is that I can throw a backpack on and grab some bear spray and head up into the high country. Anything else beyond that is a bonus.”