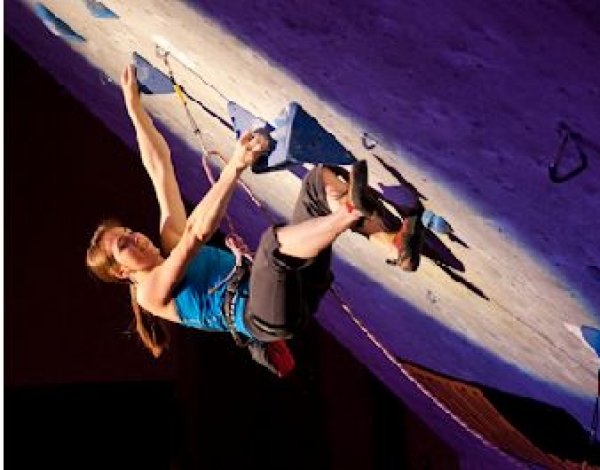 A rowdy throng of spectators crowded into Boulder’s Movement Climbing and Fitness on Saturday night to watch Sasha Digiulian and Magnus Midtbø win the 2011 Sport Climbing Series National Championship, the precursor to the International Federation of Sport Climbing Lead World Cup this fall.

After the qualifiers competition on April 1, nine women and 12 men, many of whom were local Boulder climbers, advanced to the finals round.

The women’s route, a 5.13c that began as a traverse to a double-hand dino, then moved through a steep section of powerful movement to a technical sequence at the top, was completed only by Digiulian. Boulder climber Paige Claassen took second, and Dana Riddle came in third.

The men’s route remained unfinished, though the top three placing competitors, Midtbø, Matty Hong, and Carlo Traversi, all fell a few mere moves from the top. The route, a 5.14a, began with a section of 5.13 that led to a rest around the fourth bolt before a section of power endurance climbing, culminating with a three-move V8 boulder problem. With the competition so close, the points from the qualifiers round were used to decide the winner, with Midtbø winning by two tenths of a point.

“As route setters, our ultimate goal is to divide the field of competitors,” says Chris Danielson, head setter for the event. “We try to create interesting movements that are functional but also look aesthetically spectacular on the wall and make for a good show. There’s always an intended sequence, but climbers are so creative that you can never really predict how they’re going to climb it.”

Hong, a freshman at Colorado State University whose father, Steve Hong, is well-known for his days as a top climber, took second place. Locals Traversi and Jon Cardwell followed him in third and fourth place, respectively.

This fall will be Hong’s first time representing the United States at the World Cup as an adult competitor. The competition, which will be held at Movement in October, marks the return of the World Cup to American soil after more than two decades.

“Hopefully this will start bringing World Cups back to the U.S. again,” says Hong, who has noticed an increase in public interest in the sport and the competitions. “There’s a lot more money in the sport now, and more people are getting into it. The crowds are getting bigger and bigger at each comp, and it’s getting people psyched.”

Danielson, who has worked in the scene for more than a decade, echoes this sentiment.

“The growth of the sport overall is definitely an objective,” Danielson says. “By that I mean more participants and higher-level competitions showcasing the abilities of athletes that are at the top of their game.”

For Chelsea Rude, head coach of Movement’s youth team and long-time climbing competitor, the return of the World Cup to U.S. soil brings opportunity and possibility for America’s involvement with the sport. Rude placed fifth in the competition on Saturday.

“Having the comp at Movement was important not only for Boulder, but for the U.S. in general,” Rude says. “The competition aspect of climbing has been steadily developing, and with the U.S. hosting a roped World Cup for the first time since 1988, I think that sport climbing nationals is only going to get bigger.”

Rude says that Boulder, with its high concentration of elite and amateur climbers, is the perfect setting for the World Cup’s return to America.

Danielson agrees, saying, “The comp was a great highlight for Boulder and an excellent lead-up to the World Cup in the fall.”