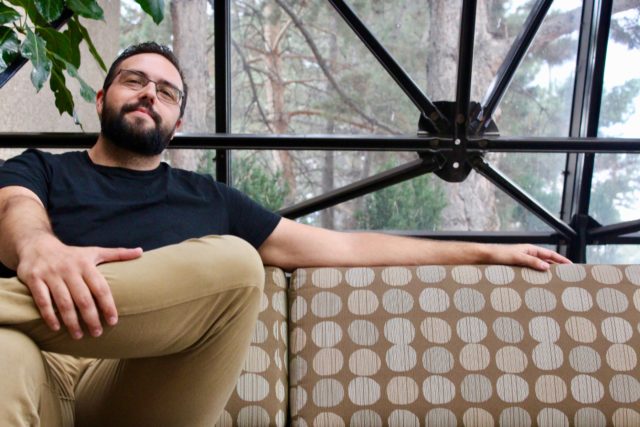 It was hot the day Nigel Knutzen stepped out of his front door in Edwardsville, Illinois. He hoisted an 80-liter pack onto his back and cinched down the shoulder straps. Maybe 50 pounds, he gauged. Loaded with the bare minimum he’d need to survive — clothes, snacks, a sleeping bag and a tent — he glanced up at the cloudless blue July sky and took a deep breath.

This was it. This was the beginning.

Knutzen stepped off his porch and started down the street, walking away from the campus of Southern Illinois University, Edwardsville.

Those were the first steps of what became a 925-mile journey. A cross-country, campus-to-campus adventure that would, if all went well, deliver him to the front door of Boulder’s Naropa University, where he’d enrolled in the MFA theater program.

It was sure to be anything but a typical stroll to school.

Not only because of the distance that stood between him and his goal, and not due to his humble $30 budget, but because Knutzen was out to prove something to the world. A couple of things, actually: first, that people and the world are generally good. And second, that chasing your dreams is as easy as packing a bag and hitting the road.

It would test Knutzen, no doubt, both mentally and physically — spiritually, even — but it would also test the world. Could a person pull up stakes and leave one place to pursue their vision in another? Could they do it without a huge sum saved, without a job lined up and without a place to live once they arrived?

Knutzen, with his trusty pack and steely optimism, was going to find out. Even if the answers to those questions challenged his hopeful views.

“I was broke where I was,” he says, smiling. “At least if I was broke in Boulder I’d be going to grad school, and I’d still be moving in the right direction.”

In the weeks prior to his departure, Knutzen offhandedly mentioned to a friend the idea of walking the whole way to Naropa.

“They laughed that off and kind of let it go,” Knutzen says. But he’d been serious, and the more he thought about it, the better idea it seemed.

“Due to my financial situation, I didn’t know how else I was going to get there,” he says.

He had a goal of not soliciting any help along the way — no hitchhiking, no cardboard signs, no relying on the support of others. Not unless they offered it to him, in which case, he says, he’d let whatever happened, happen.

Knutzen posted to Facebook after the first day of his trip. “My route takes me along the river roads until Hannibal, MO where I’ll jump on 36, west until Denver.”

One day after the next Knutzen made his way from the grassy plains of Missouri through the flat farmlands of Kansas on towards the Rocky Mountains. He was living his own On the Road adventure, Dharma bumming his way through coffee shops and city parks, skipping like a stone across middle America, bound for a brighter future.

It wasn’t long before Knutzen started to encounter the altruism he’d set out to prove exists, and it garnered a lot of hope — not just for his journey, but for his idea of humankind at large. Sometimes it was an anonymous stranger who paid for his meal out of the blue. Sometimes it was a curious driver who slowed down and offered him a ride. Once, in Marysville, Kansas he even met a man who offered him a job. “This town needs more good people like you,” the man had told him.

Tempted as he may have been, Knutzen knew his aim. And he wasn’t about to be derailed in Kansas, or anywhere else, en route to it.

One morning, a few days later, he awoke to a drizzling pitter-patter on his tent fly. Rain. He was in the middle of nowhere, without rain gear. As he began to pack his things, a downpour erupted. Knutzen was very suddenly faced with a choice: keep walking and gamble on the storm letting up — or turn tail and retreat several miles back the way he’d come the night prior.

The thought of backtracking was disheartening, but he had no choice, “Anyone who has hiked knows, if you destroy your feet because they’re wet, you’re done. You aren’t going to walk anywhere.”

So, with haste, he packed up and took off.

When he arrived back in town, his pack was soaked through, his clothes, shoes and belongings were all sopping wet and the rain was still coming down in torrents. He sought refuge in a local coffee shop to dry out, recharge and wait out the storm.

Minutes turned to hours, the morning turned into afternoon, and soon it would be dark, Knutzen realized, watching the unrelenting storm. And when that shop closed, he’d be back out in it — for better or for worse.

A sense of wet doom began to creep over him.

Just then he received a Facebook message. It was an old friend of his from Illinois, asking how close he was to certain hotel. “Not far,” he replied. “Only a couple of blocks.”

To his astonishment his friend told him that there would be a room waiting for him if he could get there.

“He told me that he didn’t know anyone brave or stupid enough to chase their dreams like I was doing,” Knutzen recalls. “He said that it was the least he could do for me.”

So, at least for one night, Knutzen had a roof over his head and a bed to sleep on.

But most nights, sleep didn’t come so easy. Not because he was on the ground in a tent somewhere unfamiliar — but because he was on edge. Even the distant screech of tires, or the dull thwap of wind slapping a powerline would jolt his senses, setting off internal alarms and chasing sleep just beyond grasp. “Every time a branch broke, I started thinking, ‘is that a deer that’s about to stomp on my tent? Is that a person who I’m going to have to deal with right now?’”

Despite those sleepless nights, the days continued to pass and so did the miles. He started blogging to keep people close to him updated on his progress. But as he made more friends and connections along the way, more and more people started reading his blog posts, tracking his headway. Like Forrest Gump’s band of runners, following him (albeit virtually and likely from an armchair) across the country.

Unintentionally, Knutzen had become a source of inspiration for people — a walking motivation.

“I was trying to show people, ‘Look, you can just do these things. If you set your mind to it, it doesn’t matter what your circumstances are, if you have a goal and a desire to fulfill that goal, just go for it. What have you got to lose?’”

On the 13th day, Knutzen landed in Boulder. And he couldn’t have been happier.

“We did it everyone!” he posted to Facebook on Aug. 7, 2018. “I never imagined arriving here so quickly and I certainly could never have done it without all of you!”

When he finally laid eyes on the Naropa Nalanda Campus, Knutzen was moved beyond words.

He fell in love at first sight: the cool green lawn scattered with students sitting in circles laughing and talking, the August breeze whispering through the trees that cast shade upon his soon-to-be peers. It was more beautiful than he could have ever imagined. Knutzen had arrived.

But arrival, he knew, did not mean conclusion. His journey was far from over.

“For me, the walk was just phase one,” he says. “The work really started when I arrived in Boulder.”

With the guidance of his recuiter, Knutzen got a job working as the patron services associate at the Dairy Center for the Arts, and through the Dairy, he met someone who helped him find a place to live. In the span of a week, he had landed and established everything he needed to get by.

Of course, that doesn’t mean he isn’t still facing challenges today, Knutzen admits. He’s still living paycheck to paycheck, he’s in class from 9-to-5 and then works in the evening after that. He performs when he can and helps choreograph action scenes for peer theater projects. Time is not something he has in excess.

Still, Knutzen seems to be loving where he’s at. He’ll be performing in two upcoming shows at the Dairy: the first, The Royal Players’ Guild: Seven Revels, during the last week in March, and the second, Escape will run the last two weeks of August.

Knutzen’s journey wasn’t just about him, he says. It was for the wider world, for everyone who has ever wondered if the grass is actually greener on the other side. “I want this to be an example for other people, for how they can improve their own situations in life.”

Change can be as simple as walking out your front door. If you need a reminder, just look to Knutzen.

You might actually see him around town. Without a car or a bike, his feet remain his primary mode of transportation. He walks everywhere in Boulder — walking to class, walking to work, walking around — the walking man, walking on.