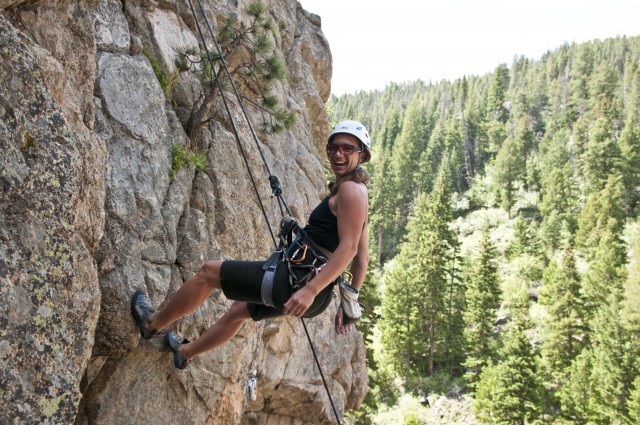 This Saturday, many people will rock climb, hike and walk around in the beautiful Colorado sunshine. But some of them will do so in support of ovarian cancer research with the HERA Women’s Cancer Foundation’s Climb4Life Colorado.

Mary Jo Bode first began participating in Climb4Life five years ago, to support her close friend, Donna Sutton, as she battled ovarian cancer. At the time, Sutton had already undergone numerous surgeries for her cancer, and was quickly losing strength.

“The climb was such an exciting time for Donna,” Bode says. “Seeing all those people coming together to do something for people with ovarian cancer, and seeing some of the survivors — their energy and their strength was really an inspiration.”

Though Sutton lost her fight with cancer two years ago, Bode continues to participate in Climb4Life Colorado every year. The event is hosted by the HERA Foundation, a nonprofit organization whose mission is to “stop the loss of women from ovarian cancer by promoting health, empowerment, research and awareness [HERA],” says Meg Stietz, executive director of HERA.

“I really think one of the most important parts of the event is the awareness that it brings for women,” Stietz says. “The signs and symptoms of ovarian cancer are very vague, and they’re things that women experience all the time. The symptoms can be things like bloating, frequent urination, cramping, that sort of thing, and there is currently no early detection test for ovarian cancer.”

The American Cancer Society estimates that in 2012, around 22,280 women will be diagnosed with ovarian cancer, and about 15,500 women will die from the disease. Because many of the symptoms are common problems for women, they often go unnoticed, Stietz says.

“Women just need to be their own advocates, in terms of knowing their own bodies and being able to say to a doctor, ‘You know, something’s not right,’” Stietz says.

Though Bode says she was “not much of a hiker” before she began Climb4Life, she now hikes every weekend with friends and always carries the teal ribbon that is the symbol for ovarian cancer.

The original founder of the HERA Foundation, Sean Patrick, who lost her battle with ovarian cancer in 2009, had a similar view.

“She saw rock climbing as a metaphor for taking charge of one’s health in terms of decision-making, empowerment, taking care of yourself and as a way to promote women’s health,” Stietz says.

Climb4Life Colorado will be held this weekend, June 22-23, at various locations around Boulder. Visit www.herac4lco2011.kintera.org for more information.