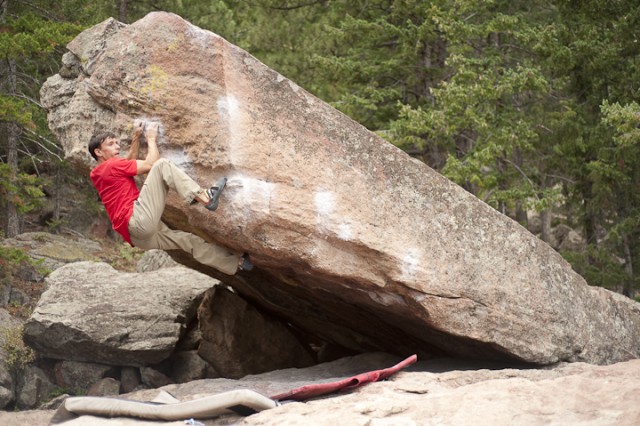 Let’s be honest. Being comfortable has never been one of the selling points of rock climbing. Between the ever-present ache of tight shoes, the exposure to the elements and the occasional torn and bloody fingertip, climbers are used to enduring a fair amount of suffering in pursuit of their passion. However, once that autumn chill touches the air and the snowflakes start to fall, even some of the most stalwart enthusiasts head to the gym rather than subject themselves to belaying in the cold.

Luckily, Colorado has a
surplus of sunny, south-facing crags to break up the monotony of day
after day spent pulling on plastic in the gym. While there are
definitely some days that no amount of hand-warmers in your chalk bag or
copious layers of down on your body can keep you from sniffling
miserably while you belay, less hypothermic conditions can usually be
found by those bold enough to seek them. Those who do are often rewarded
with the unbeatable friction and low humidity that create some of the
best sending temps of the year.

“I’m
from the south, so my blood still isn’t so used to cold weather,” says
Anne-Worley Moelter, general manager of Movement Climbing and Fitness.
“I’m always looking for the sunniest spots to climb once fall rolls
around.”

Moelter
often seeks her respite while bouldering at Flagstaff. On a clear day,
the Monkey Traverse area at Flag usually guarantees warmth while it
basks in the early to late afternoon sun. Moelter’s husband Mike, on the
other hand, prefers climbing in the Flatirons, where he uses a system
of “scarves, a thermos of tea and a hot water bottle” to keep warm.

For
those partial to traditional climbing, the West Ridge of Eldorado
Canyon offers a couple hundred routes, both single and multi-pitch, from
5.6 to 5.12. Right in Boulder’s backyard, most of the routes stay in
the sun from about noon until 5 p.m. Pro climber Nick Martino prefers
the virtues of Eldo’s stellar Rincon Wall.

“The
quality of the rock is incredible. Like many of the south facing walls
in Eldo, the winter can actually be the best time of year to climb at
the Rincon Wall,” Martino says. “On crisp sunny days you can trudge up
there through the snow to find that the base and the routes are warm and
dry.”

Kevin
Bains, operations manager at the Boulder Rock Club, makes the commute
to Turkey Rocks Area in the South Platte to seek sun during the winter
cold. Located about two hours away from Boulder, Turkey Rocks is part of
the abundant deposit of granite that makes South Platte a popular
destination for weekend warriors. Although it can often take a
four-wheel drive vehicle to reach Turkey Rocks during the winter, the
cliffs can be a haven of warmth even when there’s snow on the ground.

“The
cliffs just bake in the sun all day,” Bains says. “It’s amazing
granite, just splitter after splitter, and there are tons of choices
from five-seven to very hard off-widths.”

Shelf
Road, another popular favorite of many Colorado climbers, offers nearly
1,000 sport routes of vertical, pocketed limestone. Three hours from
Boulder near Canon City, the extensive stretch of chalky golden rock is
very beginner friendly, but even the more experienced climber can find
some brilliant routes to dangle from. As long as the sun is shining,
Shelf Road is a veritable oven, with its bright perpendicular cliffs
acting as giant radiators. I’ve spent many a pleasant winter afternoon
climbing in shorts and getting a tan while on such Shelf classics as
Lats Don’t Have Feelings (5.11d), The Gym Arete (5.12a), and I Claudius
(5.11b).

If you’re
out by Shelf and are in the mood for less vertical ascents, you might
want to check out Newlin Creek, just south of Canon City. Although the
area gets visited mostly for bouldering, it does have some trad and
sport climbing as well. Sam Johnson, a project planner for REC Inc,
recommends such problems as the classic Bear Trap (5.6), Jacques
Cousteau (5.11), and The Nickness (5.10).

“It’s
an awesome spot,” Johnson says. “The best thing about it is the rock
quality. It’s all gneiss with really defined features and the lines are
pretty obvious.”

Other
great winter spots include bouldering at Morrison or Mount Sanitas,
sport climbing on the north side of Boulder Canyon (facing south), the
Catslab and Highlander Crag at Clear Creek Canyon, or the volcanic rock
of Penitente Canyon.

So
whether you only have time for an afternoon bouldering session at
Flagstaff or are fortunate enough to make a weekend trip to Shelf Road,
Colorado offers a variety of climbable winter crags to suit whatever
style you’re interested in.