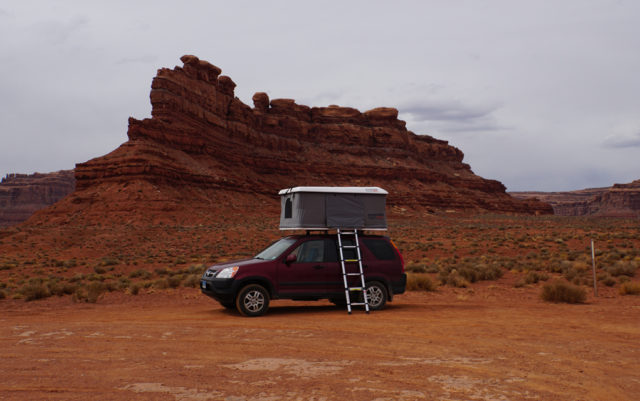 Let’s face it: Astro vans and Prius sedans are not the first adventure rigs of choice when it comes to Boulder’s outdoor crowd — a group that gravitates toward Toyota trucks or tricked-out Sprinter vans that sometimes cost north of $50,000. But what if your daily driver — even if it is a Prius — could be just as comfortable, cozy and ready-to-roll as a truck or a camper van? When Boulder resident Tim Nickles tried to answer this “what if” question, he stumbled upon a new career.

Nickles, an Alaskan native, landed in Boulder years ago as a University of Colorado Boulder grad student studying biochemistry. He never dreamed of being a car-camping innovator. All he really wanted was a quick way to leave the Front Range crowds on a Friday afternoon for his weekend cycling adventures, plus a system that would allow him to sleep at trailheads and other locations without searching for a place to pitch a tent or squishing himself in the backseat of a car.

The idea to build a collapsable tent that could be attached to a car’s roof — Priuses, SUVs and vans alike — would end up changing his life.

To be fair, Nickles wasn’t the first to think about camping on top of a vehicle. His initial inspiration came around 2016, from a buddy in Chamonix, France, who had a hardshell rooftop tent secured on top of his Toyota. “I thought it was a great and inexpensive way to turn a Toyota into a camper,” says Nickels.

So, back at home, he went to work on his own Astro van. When he’d first started building out his van, he focused on creating an adventure rig that could haul his bikes and other outdoor equipment while also providing a sleeping space. After his trip to Europe, he realized he could sleep on top of his van and free up the valuable inside space for more gear, while also making it more comfortable for his head to hit the pillow.

“I went to buy a rooftop tent and discovered they were hard to get and expensive,” Nickles says. When he failed to find one that fit both his needs and his budget, he decided to take matters into his own hands.

Car-top tents typically cost more than $4,000, says Nickles, and they lack some key features he’d seen in Europe. The enthusiastic mountain biker, at this point sincerely committed to finding a solution for his needs, realized he could move forward in one of two ways: He’d have to find someone who could make a rooftop tent at a price he could afford, or he’d have to figure out how to make one on his own.

Nickles first looked to existing manufacturers with an eye to improve what was already on the market. Thoughts of making a career out of this were still far from his mind; he only wanted his own tent, designed to work for his own needs. “The first prototype began with a company that was making a version of a hardshell rooftop tent,” he says. “I came in and said, ‘I want you to change some features.’”

The initial conversations were enlightening. Nickles, who had dabbled in sourcing bike equipment from China, learned that if he wanted a tent designed by and for himself, he’d have to take a risk, as factories weren’t interested in working with him unless there was cash to be made. With his design in hand and a minimum product order requirement (12 units), but no customers aside from himself, Nickles ended up maxing out two credit cards on his first order from the factory. This, he says, was “terrifying.”

Terrifying or not, he was able to unload all 12 of the tents via word of mouth, Craigslist ads and posting about them on Facebook. He named them “Roofnests,” and quickly established an eponymous company.

It was a process that he describes as rewarding, but also incredibly stressful, as he admits that he was completely broke at the time, and although the first tents were functional, they lacked some of the key design and convenience elements that Nickles knew he’d need for his newly founded company to survive.

“The [2016] manufacturing was not super evolved,” Nickles recalls. He was relying on an existing roof-top-tent manufacturer based in China to produce the Roofnests to his specifications. “The first production run involved some tweaking [of a pre-existing design], but if I was really going to make it my own, I knew I had to start with a manufacturer who didn’t have their whole production process worked out and their own way of doing things — someone who could adapt to what I wanted.”

It took Nickles three production runs to develop a relationship with the factory that produces Roofnests today, which are a far cry from the first generation that debuted in 2016. Since then, Nickles has upgraded more than just the tents. He’s built a small company that employs five people besides himself.

The company now offers five different roof-tent models, ranging in price from $2,795 to $3,495. All offerings, from the wedge-shaped Sparrow Eye to the aluminum clamshell Falcon, can bolt directly onto the crossbars of any existing roof rack. With weights varying between 120 and 150 pounds, and an aerodynamic shape that clocks in at less than 12 inches high, the impact on gas mileage or an increase in wind noise is much less than you’d expect: Nickles claims that on long trips, the mile-per-gallon penalty for a vehicle with a Roofnest is less than one mile per gallon.

Nickles laughs when recalling his early efforts. “In the beginning, I was not really thinking I would start a company. I was thinking that I could make and sell 10 to 20 of these things and that this would be something cool to do. I never thought it would become a whole new career.”

After selling the initial 12 units, he ordered 10 more, “because that’s what I could afford,” he says. But the demand, however unforeseen, never slowed. “This year we are going to sell 900 tents!”

It’s a level of growth that’s impressive, but one that also reflects a growing interest in camping across the country. According to Kampgrounds of America (KOA)’s 2018 North American Camping Report, 2.6 million more households went camping in 2017 than in years prior, with representation across all ethnicities.

Still, if you compare the sale of Roofnests to actual tents or even to camper vans, 900 units isn’t a lot. And, admittedly, Roofnests are not for everyone. Yet they seem to resonate with consumers across the Rocky Mountain West who are passionate about getting outdoors, but don’t want the hassle and expense of owning a dedicated camper van or don’t have the time to backpack into remote wilderness area with a tent on their back. Roofnests are a solution for car-campers and other outdoor types who use their vehicles as a base camp, and if you’ve ever slept in the back of your Subaru wagon at the base of a crag on a weekend climbing mission, the comfort and convenience of a Roofnest will be instantly obvious when compared to the cramped confines of sleeping with your seats folded down.

During a product demonstration that Nickles hosts in his driveway, he unhooks the latches around the Roofnest’s hardshell top, and the tent automatically pops up and open of its own accord. A few moments later, we scamper up the lightweight ladder and lay inside. A cushy mattress invites us to stretch out (there’s three of us with plenty of room to spare) and the tent  — the Sparrow EYE model — feels light and airy, thanks to windows on three sides. When we’re done hanging out, it takes less than five minutes to pack up, secure the tent and have it ready for the road. While it might be faster to hit the highway after sleeping in the back of my station wagon, there’s absolutely no doubt that the Roofnest offers more comfort and convenience. I’m already thinking about which model will look best on my Audi.

This reaction isn’t unique to me. “Incredibly easy to set up,” says Outside Magazine editor Bryan Rogala. “By the second night with the Roofnest, I was sold,” says Action Sport Network’s Mattie Schuler. “I could easily see the game-changing capabilities of a rooftop tent.”

Ever the tinkerer, Nickles continues to tweak different tent concepts. The majority of the Roofnest product line features a fiberglass-reinforced ABS shell construction — meaning it’s lightweight, yet strong enough to mount your own bike or ski rack on top of the hardshell, with supportive struts that allow the shell to pop up and open while the bikes or skis stay on top.

His newest concept, however, is the Falcon, a burly, wedge-style offering that features an aluminum clamshell that comes with the option for a set of preinstalled crossbars that can carry bikes, kayaks, skis and anything else.

The genius of Nickles and the Roofnest concept is that the tents are a simple and easy-to-use solution for us average adventurers and weekend warriors: the ones who just need a cozy basecamp for our adventures, from a quick overnight trip to catch the sunrise on Sugarloaf, to a full weekend of car camping when mountain biking in Fruita.

And that makes Nickles happy. “It’s nice to know that we’re making it easier for people to get outdoors,” he says. “That was always my objective.”