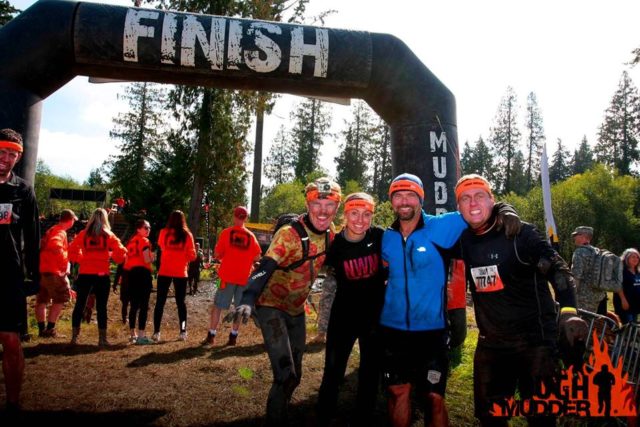 On Oct. 12, 2009, Jim Campbell pulled his Harley into a roadside Taco Bell in Utah and unwrapped two spicy green burritos with extra sour cream. This was his makeshift celebratory dinner. Had things gone according to plan, he’d have been eating dinner with a group of friends in Milwaukee to celebrate the 31,000 miles they’d just completed in a 31-day charity campaign. But life rarely goes according to plan.

Campbell, who was 45 at the time, had started his ride on Sept. 11 in hopes of transforming the negativity associated with that day into something more positive. His whole life he’d been lucky, and pledging to ride his motorcycle 1,000 miles a day for an entire month and donating all raised funds to the Muscular Dystrophy Association was his way of paying his good fortune forward.

As a boy growing up in Crested Butte, Colorado, Campbell thrived in the pursuit of anything that put his body in motion. Early on, he’d learned to ride motorcycles, refined Colorado’s windsurfing scene and even earned his pilot’s license. At one point, the American Motorcycle Association ranked him the third best rider in the country, and in 1984, he qualified for the USA Olympic windsurfing team. As he grew older, he cultivated a successful home-building business.

“I was kicking ass at life all around,” he says.

His 800-pound Harley Screamin’ Eagle Ultra-Classic motorcycle accompanied him across the country in the fall of 2009. Together they rode through desert, rain, cities and open expanses. The final day of the charity ride, a snow storm in Wyoming forced Campbell to reroute to Utah, away from the celebratory dinner, leaving him alone after what, at the time, felt like one of the biggest accomplishments of his life. A long month like that on the road changed Campbell.

Upon returning to Colorado, he says, “I felt useless and helpless, and like I wasn’t participating in life. It threw me in a loop. So I decided, ‘Well I’m going to collect [the last donation] check in Dallas.’ I left real early, and I got going down there.”

It was then that his life really began to veer off-route. Jim’s voice, equally weathered tough and soft, intermittently wavers as he recalls the seven years since 2009.

“I see all the traffic slowing ahead… I see all these cones. Maybe they’re merging,” he thinks. Suddenly he’s pushed into the median by a swerving semi-truck. Had he not been riding so consistently in the last weeks, he might’ve lost control then.

But another semi-truck swung off the road and stopped broadside, right in front of him.

“I’m looking at it, and I can see this guy’s eyes and he’s looking right at me, and we both know I’m going to hit him.” Campbell was going about 55 miles per hour.

“When I made contact with his truck, I drove my femur through my hip… [But even then] I stayed on my motorcycle… I started veering [to the left] and then saw a guardrail that I was going to hit.

“At that moment, everything around me stopped. Cars stopped. I stopped. It felt like I was wrapped in this really warm fuzzy blanket.”

An internal voice told Campbell he was going to be OK.

“And the second the words stopped, everything around me started up again,” he says. “I flipped over the guardrail, and my bike landed on top of me.”

Campbell broke his neck in two places, the c1 and c2 vertebrae, snapped both his scapula and clavicle, tore his rotator cuff; his left femur pulverized his hip, his pelvis snapped in half, and his head hit the ground with such force that it induced a stroke.

The paramedics closed the door to the ambulance as the police asked for Campbell’s information. Don’t worry about it. He’s not gonna make it, Campbell heard them say. “But I tried to yell and tell them my name.”

At the hospital, “Everyone was just getting me comfortable to die.” When he didn’t die the message became, you won’t be able to do anything. Better accept that you’re alive and that that’s good enough.

Yet for Campbell, “good enough” had never been an option.

After spending six months in a cerebral halo, Campbell relearned how to walk, but that was never going to be enough to satisfy a competitor like Campbell.

A little over a year after the accident, a friend’s photo on Facebook caught Campbell’s eye. He saw a man jumping through fire, and the accompanying text was a request for teammates in “The Toughest Event on the Planet.” So Campbell investigated, and he decided that after proving everyone wrong about surviving his accident, competing in a Tough Mudder — an extremely demanding long-distance obstacle course that only 70 percent of participants finish — would be his next logical goal.

“I thought it was going to be a one-time thing,” Campbell says. And now, seven years later, he holds the record for the most Tough Mudders completed by a single human: 107.

Tough Mudders are notoriously difficult, even for able-bodied participants. A normal route lasts 10-12 miles and features a series of military-style obstacles. According to their website, the courses are “designed to drag you out of your comfort zone by testing your physical strength, stamina and mental grit. With no podiums, winners, or clocks to race against, it’s not about how fast you can cross the finish line. Rather, it’s a challenge that emphasizes teamwork, camaraderie and accomplishing something almost as tough as you are.”

That first Tough Mudder gave Campbell a taste of what was to fuel the rest of his recovery, and potentially the rest of his life. To get through the obstacles, Campbell had to apply the skills he’d gathered in his roles as a professional athlete and an accident survivor: a tenacious will and superhuman ability to overcome challenge. But to finish the whole course, he had to tap into something he’d never previously needed, something that sparked change in the way he understood the world.

“The support and the camaraderie [displayed in a Tough Mudder] brings out the best in every person I’ve met,” Campbell says. “I can’t explain it. I’ve competed my whole life in things and it’s always been about trampling, but here people are lifting you up.”

The friendships and the community that Campbell forged through Tough Mudder courses not only amplified, but also vindicated the alterations to his life after October 2009.

“I wouldn’t even want the accident to never have happened,” he says. “I’d go through all that pain and heartache again just to find this place.”

Darth Vader (yes, that’s his legal name), Campbell’s friend who has been living with leukemia and cancer for the last 14 years, has completed 70 Tough Mudders to date. They met three years ago during a race.

“The course helped us mend ourselves emotionally more than physically,” Vader says. “We’ve been there for each other unconditionally. Neither one of us want the sympathy. We’re more about the empathy, understanding each other, and so we can keep it real together.”

Vader believes the Tough Mudder has given both he and Campbell a place to put the tools they’ve developed over time to good use. Among the obstacles is a place where they not only feel accomplished, but a place where they also feel a sense of community and purpose.

“We kind of have an unspoked communication that we’re looking for more than just being labeled as disabled or having limitations. I’m not afraid to have the label put on me, but I want to do the best job that I can and also not be defined as [by we’ve] had to deal with.”

Campbell feels the same way. The Tough Mudder has not only helped with accepting his physical limitations, but it’s lent him a sense of purpose and clarity.

“It’s been such a positive experience where I am actually the one telling those people not to give up, whether in small or large ways,” Campbell says. “There are people fighting loss of a family member, loss of limb… every detrimental thing in life people go and search out in a Tough Mudder. Instead of me being the one lying there in need, or instead of [being the one] in the ambulance telling you to just take morphine and die, I’m the one staying with you and telling you to keep going and I’ll be there with you the whole time. Together.”

Campbell admits, “It sucks being hurt, and it sucks not being able to run as fast as you can or not being able to do all the things you used to do. But I’ll tell you what’s amazing: on the course you are saving people’s lives. I’ve been to the Olympics. I’ve been a national motorcycle racer. I’ve made hundreds of thousands of dollars a year. But only now do I know no matter how perceivably happy I was before, I wasn’t. I’m more happy now giving back to others than I was in my previous life, and I could never go back to that life.”