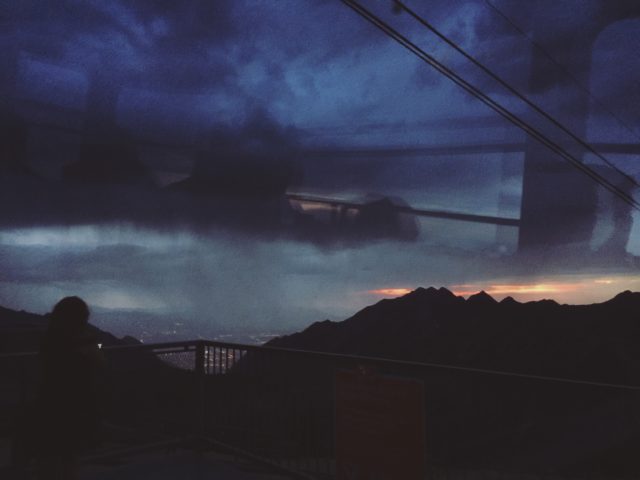 The following story presents another perspective of Emma Murray’s attempt to complete the Wasatch Ultimate Ridge Linkup, which Murray detailed in the July 26 article “Where fear and anxiety collide.”

From our respective points, two-and-a-half miles apart, Emma Murray and I watched the sun dip behind distant mountains. As the clouds gathered and the rain began to drop, Emma slid down a gully to escape the lightning-prone ridge. I waited at the top of Hidden Peak on the aerial tram that couldn’t run.

“There’s too much electricity in the air,” the operator told me. “Everyone has to go inside the structure.”

A wedding reception happened to be taking place at the structure and a woman from the party gently held her infant against her chest as she passed beneath the rain. I followed behind and sat in the entryway of the building, a concrete haven atop this 10,992-foot mountain that houses a ski-resort restaurant, aware that my neon windbreaker set me apart from the well-dressed crowd.

Music bounced and people drank in suits and pearls. I imagined Emma, soaked and shuddering, as she picked her way through a rocky slope to a campground on the valley floor. I stared at the dry bag stuffed to the brim with burritos, energy gels, chips, snack bars; it was nearly all for Emma, who’d been on the go since 6:52 a.m. This was supposed to be our second rendezvous of the day. Lightning splayed the dark, and she was still alone.

After driving eight hours from Boulder, we arrived at the trailhead of Ferguson Canyon, a toe of the Wasatch Mountains, at 1:40 a.m. We’d made the same trek to Salt Lake City together almost exactly a year prior, but unlike last year, this trip felt formidably impromptu. Tucked in the corner of a wealthy suburban neighborhood, we set up the bed in the back of Emma’s van and slept comfortably without blankets. A “No Overnight Parking” sign passively scolded us by the trail a few paces behind us, but no matter; Emma was about to embark on a mission of ultrarunning proportions, the most arduous for her yet.

The Wasatch Ultimate Ridge Linkup, (WURL) circumnavigating the Little Cottonwood Canyon of Utah, typically begins at Ferguson Canyon, continuing in clockwise fashion over to the Bells Canyon Granite trailhead. This nearly 36-mile endeavor, with around 18,000 feet of accumulated elevation gain, was first documented in 2004 by Jared Campbell in 21 hours and 30 minutes. Since 2004, a growing list of completions, currently at 35, has inspired all the more attempts by professional and other serious athletes. The case seems to remain, however, that a man has been a part of every successful execution, leaving the field wide open for an all-female attempt.

Emma and I both first heard about the WURL during our last Salt Lake City visit, and the original intention was for us and two other women to attempt the traverse together. Circumstances took their toll, of course, and the prospects of an attempt seemed to fall away; I was suddenly dealing with a severe knee strain and tendonitis. One of the women relocated to the West Coast. As partner after new potential partner bowed out, Emma was ultimately left with the reality of doing it alone.

For the past year, Emma had increased her mountain training in tandem with preparing for her first 100-mile race, set to take place in Leadville this August. She is not sponsored, not a professional athlete by any means. So when Emma contacted people who have either completed or have spent a lot of time on the WURL, she was often left with condescending and intimidating messages.

“I understand their hesitations,” she said the night before she was to begin, “I’m about to try to onsight the WURL.” True to doubt, Emma had never hiked any of the peaks on the route, and this very notion perplexed the minds of those who didn’t know her. The “professionals” have a difficult time, so why wouldn’t she? While her training consumes an average of 15 hours per week, and has become more or less an unpaid part-time job, the intimidation and the label of imposter in the Wasatch Mountains lingered nonetheless — but, why not try anyway?

Around 1 p.m. I hiked up the steep, one-mile trail to Cardiff Pass with Lauren “Lo” Jones, our Salt Lake City friend and contact. We’d planned to meet Emma there for her first resupply, as she only carried enough food and water to last a few hours at a time. The afternoon was hot, but the wind pleasant. Innocent white clouds passed, and the wildflowers dressed the slopes in thick swaths of yellows, pinks and blues. When a brief shower of rain passed, we waited. By the time Emma made it down to Cardiff — three hours later than predicted — Lo had already gone home.

“It’s really hard,” Emma said with her back slumped and her eyelids looking heavy. She sat on a flat stone with her legs folded and stuffed a breakfast burrito into her mouth, guzzling water. It was now just after 4:30 p.m. “It hailed on me while I was traversing Monte Cristo,” she added, then glanced across the valley to where I’d be meeting her next, another nine miles of ridge traversing. “At this rate, it’ll take me nine hours to get there. I didn’t even bring a headlamp for this next section.”

I could tell she was disappointed in her pace thus far, and a part of me wanted to say something like, “Yeah… I don’t know if I’d continue.” I kept the thought to myself. Luckily, I had my headlamp on me so I handed it to her.

“Amazing,” she replied, and with a relinquished sigh, she re-packed her running vest with more food and water, zipped up her windbreaker, and added, “Well, I guess I better get going.”

When I started hiking down, I intermittently glanced back to see if I could see her along the rocky Flagstaff Mountain ridge. I was in awe of her audacity to keep going. I did spot her once, the outline of her blue jacket growing smaller and smaller until she looked as tiny as the wildflowers that grazed my legs.

At 7:30 p.m., I rode the Snowbird aerial tram up to Hidden Peak in anticipation of meeting her there at mile mark 19.4. The summit was noticeably colder than the valley below. The last tram would descend at 8:30 p.m., so I knew I had several solitary hours to sleep before meeting her potentially as late as midnight — that is, if she continued with the pace she’d set earlier in the day.

The plan was for me to join her on the section from Hidden Peak to the Pfeifferhorn trail in the pitch black of night. I would be a fresh pair of eyes and a rested mind to help her decision-making processes, even a source of confidence if needed.

From my perch at the entrance of the structure, I stared at the ridgeline to come. The American Fork twin peaks, with their red sediments, loomed. The spine leading up to them looked thin and technical. I had absolutely no idea what to expect; what was I even about to get myself into?

The wind picked up and I hid in a corner. I could see the south side of Devil’s Castle, which stood between Emma and me, the two points looking like horns dipped in alpenglow. I could also see Mt. Baldy, a softly rounded summit easy on the eyes.

I liked the idea of seeing Emma cross it. But lightning flashed in the distance, to the east. Little did I know that Emma was watching another storm form in the west, behind me and the structure.

The coming rain posed a dangerous slipping hazard; the lightning drew thick lines across the fraying indigo clouds. At 8:38 p.m., after 13-and-a-half hours of effort, my phone rang.

“So sorry,” she said when I answered, “I’m a bit emotional right now.” We both knew lightning isn’t a force to be reckoned with. The safest decision became all the more obvious with every flash.

“I’ll meet you with the van. Be safe,” I said to her before hanging up.

I grabbed my bag of food and water and began to head for the dirt road that would take me all the way back down to the valley floor when the aerial tram operator stopped me. It was now safe enough to run the tram, and they were evacuating everyone from the summit. I had the easy task of waiting for the lightning to pass and the tram to run. Emma had to escape the mountains that had preoccupied her for a year.