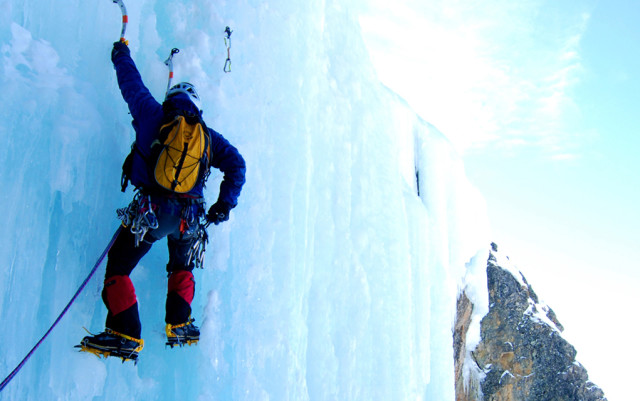 In Colorado, climbing is a year-round sport. When the heat of the summer dies down and the shadows grow longer each day, active seekers of elevation don’t hibernate for the winter — they pull on some layers and take the cold season by storm, tackling some of the nation’s harshest climates to enjoy the outdoors on their terms.
When winter comes, spillways and waterfalls in the mountains freeze into climbable routes. Using ice screws to anchor their ropes to the route, ice axes in their hands and spiked crampons attached to their boots, ice climbers haul their way up frozen faces. These alpinists are arguably some of winter’s toughest sportsmen. Bitter wind, frozen extremities and full gravitational reliance on an easily compromised ice wall are some common challenges that these adventurers face.
But climate change is giving ice climbers a new and far less obvious difficulty to contend with.
According to data compiled by the National Oceanic and Atmospheric Administration (NOAA) in 2015, winter snow cover for the continental U.S. was 62,000 square miles under the average recorded between 1981 and 2010. Spring snow cover was the lowest ever recorded. Independent analyses by both NOAA and NASA show that 2015 was the hottest year on record.
“It’s definitely frightening in its own way,” says Ben Crawford, co-president of the Alpine Club at University of Colorado at Boulder.
Warmer climates and the depletion of snow and ice have potentially dangerous consequences for ice climbers. Solid ice is required for a safe ascent; it has to support both the weight of the climber and the punishment of being repeatedly punctured by ice axes and screws. Warming conditions create myriad changes for ice routes and the environments in which they are found.
Crawford, who led the Alpine Club’s trip to Ouray Ice Park at the beginning of March, has some comforting words — at least for this winter’s climbers. He says as long as temperatures are dipping below freezing long enough to allow for a continuous freeze-thaw cycle, the routes should stay protected.
“Ice climbing is most dangerous when it’s too cold or too warm,” he says. “If it’s too cold, the ice gets brittle and cracks easily. If it’s too warm, obviously the ice would be weakened as well. If you saw an excess of warmer temperatures, the ice would definitely be weaker.”

Since the invention of the ice axe — popularly attributed to the owner of Patagonia outdoor gear company Yvon Chouinard — in the mid-1960s, Colorado’s winters have actually stayed consistently cold. For some, this serves to dispel some fears of losing the state’s coveted winter sports access. But taking a look at the bigger picture of average heat fluctuation, the image becomes more sinister.
While winters have stayed frosty, extending temperature measurements to the entire calendar year shows Colorado has warmed three degrees Fahrenheit since Chouinard’s invention. Even with winter’s chilly reliability, rising temperatures during the rest of the year mean heavy losses to snow, ice and permafrost reserves. While glacial ice and permafrost are different from the ice on the routes that alpinists seek to climb, their depletion in the Rocky Mountains will have negative consequences for the climbing community.
Research published in a special issue of the journal Plant Ecology and Diversity in January 2016 shows an alarming rate of recession for ice reserves in the Rockies. Hydrologist Mark Williams, co-author of the research, says that while the findings are distressing as a whole, they are a mixed bag of news for Colorado ice climbers — for now. While rising seasonal temperatures have been affecting outdoor recreation in the Midwest and on both coasts of the U.S., Colorado enjoys some unique climatic privileges. But, Williams warns, these privileges won’t last forever.
“The deal with Colorado, which is a good deal, is that we’re at both high elevation and mostly a continental climate,” Williams says. “You raise the temperature a couple of degrees and it’s not gonna have a particularly large effect during the main snow season. Where it’s going to have effect is on the shoulders.”
The “shoulders” that Williams refers to are the fall and spring seasons, when rising temperatures delay the onset of freezing and facilitate earlier melting when the cold season ends. Williams asserts that this trend is still cause for some concern.
Although the winters themselves have not been significantly warmer, the research shows that ice reserves are being depleted on both ends of the season. This change weakens the integrity of permafrost that actually holds the rock together in deep mountain terrain.
“It’s permafrost on these deep mountain environments that glue the rock together,” Williams says. “When you start melting that, you have bad rock, weak rock, you have more rock falls, it gets really much more dangerous.”
The deterioration of permafrost has already begun to have a startling impact on the mountaineering community worldwide. In 2003, a devastating heat wave rocked Europe. During this time, more than 50 climbers had to be evacuated from the world-famous Matterhorn climbing area when a rock face collapsed due to deterioration of permafrost. In 2012, a Swiss research team published a report in the Journal of Geophysical Research that displayed an increased rate of rock collapse on the Matterhorn over the previous decade.
Stateside, Williams says that although lower elevations are experiencing the changes more rapidly in the continental U.S., the same deterioration is already occurring in the Rockies.
Winter 2015-16 hasn’t seen such catastrophic change as to force route closure in Colorado. But Williams contends that existing trends are positioned to affect the security of the rock. Unchecked, rising global temperatures will mean that the depletion of permafrost will only accelerate in the high elevations of the Rockies.
“It will be worse at lower latitudes and areas that have less of a continental climate,” Williams says, adding that some such areas include the southwestern region of Colorado, home of the famous Ouray Ice Park. The Ice Park hosts the annual Ouray Ice Festival, a yearly fundraiser and ice climbing competition that draws winter adventurers from all over the nation. The ice park itself boasts the advantage of having a water pipeline that its employees tap nightly during the winter months in order to build and bolster their routes. But the natural climbing routes in the region will eventually suffer from diminution of ice and permafrost if current trends continue.

Permafrost depletion is additionally concerning because permafrost stores massive amounts of carbon. Melting of these permafrost reserves releases that carbon, which has a supplementary warming effect on the atmosphere of the Earth.
Efforts to study and mitigate climate change are underway in Colorado. But for Williams and the University of Colorado, researchers have to look to financiers outside of the state government, such as the National Science Foundation and the United States Agency for International Development, in order to fund their work. With larger institutions facing these kinds of obstacles, conscious climbers like Crawford advocate for personal accountability.
“Being a climber and having outdoor recreation being our main source of entertainment, I think we have kind of a responsibility to look after the environments that we interact with,” he says.
Simple things like recycling, composting and carpooling to the climbing area are easy ways for climbers to mitigate their personal impact on their outdoor playground. Consciously interacting with the environment keeps it clean and enjoyable for everyone, Crawford says.
“Within our community I think we should really emphasize doing these little things since the outdoor environment is the one we interact with the most.”