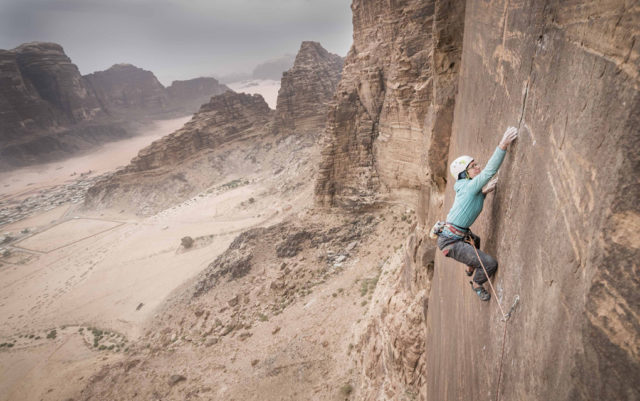 The avalanche that took Inge Perkins’ life in October 2017 was not a massive one, according to the Gallatin National Forest Avalanche Center — but it was enough.

She and her boyfriend and climbing partner, Hayden Kennedy, were skiing on Imp Peak, just outside of Perkins’ hometown of Bozeman, Montana. It had been a sporadic early winter season with high winds, and intermittent snowstorms, creating strong avalanche conditions. The two professional climbers were not doing anything too extreme, though. Not by their standards, at least.

Still, when the slide activated, started moving and buried Perkins, her beacon was turned off and in her pack. There was nothing Kennedy could do to find or help her.

Kennedy apparently “never called 9-1-1” to report the slide. Instead, he returned home, left a note with very explicit instructions for the rescue crew, as to where they would find his lost love, Perkins, and then he took his own life.

Only a week earlier on the climbing blog, Evening Send, Kennedy had been reflecting:

“Over the last few years, as I’ve watched too many friends go to the mountains only to never return, I’ve realized something painful. It’s not just the memorable summits and crux moves that are fleeting. Friends and climbing partners are fleeting, too.”

The loss of these two shining stars in the climbing community rocked a lot of people. Family, friends, fellow climbers and lovers of nature were all struck by a deep sense of tragedy. And one of them, another professional climber named Madeline Sorkin, was so moved by the sudden deaths of Perkins and Kennedy that she determined to do something: to create some kind of psychological support for her community members stricken by such profound emotional pain.

In a sport where risk isn’t just ever-present but essential, Sorkin feels that one of the only ways to minimize pain and loss and suffering is to address it openly and supportively on the back end.

And with that idea, the Climbing Grief Fund was born.

“I’ve certainly been thinking about this topic for a long time, of how the climbing community is present with the reality [of death] and how we encourage risk or sometimes take unnecessary risks,” Sorkin says. “How do we hold that space?”

Only a year prior to the tragedy on Imp Peak, Sorkin and her climbing partner Kate Rutherford had been climbing in Wyoming’s Wind River Range when they encountered a woman who had just self-rescued and was distraught. Her partner had fallen some 600 feet to his death. Sorkin and Rutherford, of course, immediately offered whatever assistance they could give, and when the emergency response was all said and done, the three women walked out of the wilderness together.

“She was on a Live Your Dream grant, which is a grant that the American Alpine Club (AAC) gives,” Sorkin says. “I found that disturbing because I was thinking about what kind of support was going to be there for her afterwards.”

There were plenty of grants to get people up on walls and out into the backcountry, into risky situations, Sorkin realized. And yet, there were none that helped people deal with the tragic and inevitable side of climbing — none that offered support or guidance for a grieving climbing partner, friend, lover, parent or sibling.

Then, the world lost Kennedy and Perkins. Sorkin’s grief reached a monstrous new level, and as she looked around at her peers and fellow professional climbers, she saw the same kind of pain reflected in them.

“I was feeling that a lot of people in my community were dragging bricks around with them,” she says, herself included. And yet, there were no resources or support systems to help anyone process those feelings in a healthy way. “Sometimes people might try escaping from their grief through higher risk-taking … like going into the mountains to escape the grief that they’re feeling by making choices that are even riskier.”

She added, “Death is such a present part of our community that we need to expand our conversation around it.”

The Climbing Grief Fund aims to do exactly that, and more, according to Sorkin. She and the AAC have teamed up to open the conversation of grief in the climbing community, and to provide support and guidance for those who’ve been struck by loss.

“We are hoping to create individual therapy grants,” Sorkin explains. “We really want to make it available to people for whom it’s cost-prohibitive. So someone can at least get a really solid sense of what therapy sessions could offer.”

On top of that, the Climbing Grief Fund is going to create a directory of resources that people can use to find books, programs and therapists who understand the climbing community and/or who are specialized in grief and trauma.

“We really want to connect the dots for people,” Sorkin says. “I hope that will go a long way as we make grief a conversation and make it more visible and more normalized, hopefully it won’t have as much of a stigma around it.”

Sorkin and the AAC are also working to create a media project that will archive stories of loss and increase the visibility of grief. They’re interviewing fellow climbers and compiling their stories in a video for social media.

“It’s really just about trying to tend to the fire of this, and get people connecting more,” she says.

Sorkin emphasizes, though, that the Climbing Grief Fund is still in its infancy. She and her partners at the AAC are still fleshing out the details, planning, brainstorming and, of course, fundraising.

“We need funding,” she says. “But we also need people who know every target in their area. We’re trying to build a nationwide network and so if someone knows resources and therapists, or if they want to be on our directory list, please be in touch with me.”

Sorkin says you can contact her at madaleines@gmail.com for anything related to the Climbing Grief Fund.

The fund isn’t an outright solution, but it’s a positive step in the right direction. The Climbing Grief Fund should serve as a needed resource for the climbing community, and hopefully it will catch people before they fall too deep into their own grief.