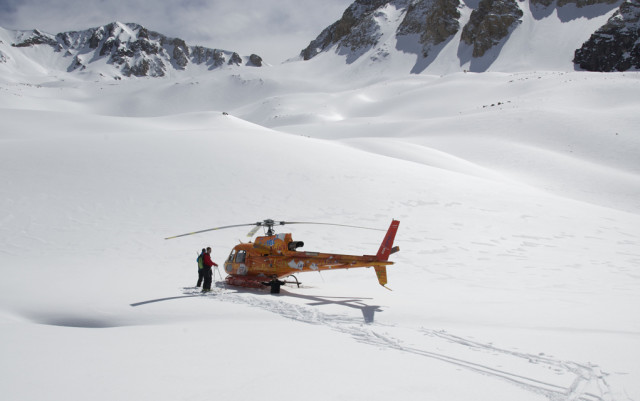 The mountains are the spine of the continent. They run for thousands of miles, in places jagged and impassible, in others friendlier, with passes guarded by large volcanoes that vent steam and spit lava. These are empty landscapes. Traveled by few, buffeted by storms. Exotic, yes, but also welcoming and closer than you think.

It’s hard to think about skiing and powder days and cold feet and runny noses in the middle of July. But when the temperature in Boulder starts to kiss 100, then perhaps it’s time to think and plan and dream a bit. To consider the unlikely journey south — south to the snow of the Chilean Andes.

The Andes, and the untouched powder they shelter, is the raison d’être for Powder South Heli Skiing. You wouldn’t expect an Andean helicopter-skiing company to have roots in Boulder, but their northern offices are here — on Sumac Avenue, to be exact, and they’re exactly the kind of purveyor of dreams you need on a hot summer evening when the itch to ski or snowboard down a mountain starts to tingle in your spine. Because July in the Andes is good — very good —and heli skiing in the Andes is even better than that.

To understand how this dream of flying and skiing in one of the world’s greatest mountain ranges started, you have to start with the dreamer himself: Rodrigo Mujica.

Mujica, a mountain guide with the international association IFMGA/UIAGM, launched Powder South with fellow Chilean and former Olympic skier Joaquin Oyarzun in 2002. A guide and mountaineer for more than 30 years, Mujica has done a lot of impressive ascents as well as other adventures, including the first east-west traverse of the northern Patagonia Ice Cap. But it was the downhill potential of the Andes that captured his imagination.

“I was in Alaska for 14 years,” recalls Mujica, who came to Boulder by way of Jackson Hole, Wyoming, before his travels took him to California’s Sierra Nevada Mountains, where he currently resides while also retaining an office in Boulder.

During his time in Alaska, Mujica became acquainted with famed Alpine skier and mountaineer Doug Coombs, who essentially launched the heli-skiing industry when he helped found Valdez Heli-Ski Guides in Alaska in 1994.

“I helped Doug Coombs, saw the [heli] operation there and then I went back to Chile and realized that the existing heli-ski operations were really poor,” Mujica says. “You could spend all day waiting for a run or two.”

Of course, the whole advantage to heli skiing is, or should be, the fact that you don’t have to wait. You fly, get dropped off at the top of a mountain and then, by the time you reach the bottom, the helicopter is ready to take you back to the top again.

This downhill inspiration was unlikely for a guy who had made his living as a mountaineering guide with outfits like Jackson Hole’s legendary Exum, focusing on taking clients up the mountain rather than down. But it was a stroke of genius, given the rudimentary state of affairs of heli skiing in the Andes. Furthermore, the vast terrain, huge vertical drop and excellent stable snow conditions were ideal for heli skiing, which complemented the limited ski resort options in the Southern Hemisphere.

“The Andes have huge terrain,” Mujica notes. “They are amazing mountains with plenty of south-facing slopes that hold powder for weeks at a time. The grandeur of the Andes, especially the central Andes, is world class. There are numerous 6,000-meter peaks. The area is remote and pristine. Heli skiing in Chile is like heli skiing in Greenland or India in the Himalaya. Chile is way up there in regards to the quality and terrain. It’s a different experience.”

Different enough, argues Mujica and others who have “been there and done that,” even Colorado locals who have their pick of places such as Aspen or Vail — some of the most renowned ski areas on the planet — will be blown away.

“We have over 800,000 acres of terrain alone in Chile,” Mujica says. And, he adds, those mountains are covered with some of the best snow on the planet, and easily accessible due to stable weather patterns which also minimize the avalanche risk and allow clients to ski or snowboard very steep and long runs. They’re the kind of runs that make you say at the bottom, “That was the best run of my life,” until you take the next run, which then is the “best of your life.”

“The snow in the Andes is extremely stable,” Mujica says. “It would be comparable to heli skiing in California in terms of stability, but with higher mountains and a much better quality of snow with lighter powder. And the weather is really good.”

The vast amount of terrain, stable snowpack and calm weather conditions combine to allow skiers to chase the holy grail of helicopter skiing, the first descent.

First descents happen when a rider skis or boards a run that has never seen a descent, and with so much terrain on tap, Mujica says they are discovering new runs all the time, despite the fact that the operation is 14 years old.

“There is a lot of room,” Mujica says. “There’s a lot of new terrain and still a lot of opportunity for first descents.”

But as wild and raw as the Andes are — and they are untouched compared to the Rocky Mountains — you don’t have to rough it. Powder South operates out of several base areas, including the very well-heeled W Hotel in Santiago, where guests depart and return from their heli-ski days via the rooftop heli pad.

Mujica laughs about such extravagant accommodations, and also advises more serious skiers to choose the low-key, but no-less-comfortable, base lodge they use in the Maipo Valley.

“You add flight time if you stay in Santiago,” he says. “And you want to use your heli time for skiing if you’re more serious about getting runs in.”

There’s also the opportunity to ski the eastern slopes of the Andes out of a base outside of Mendoza, Argentina. This part of the world is truly uncharted territory for most, with massive and remote peaks. The adventure quotient is high here, but Mujica admits that the flying times from base to skiing are longer as well, thus making Chile a better option for those who wish to get as many runs in during a week as possible.

“Chile is a bit more dependable,” Mujica says. “But we had a very good seven weeks of operations in Argentina last year. It’s all new, and more of an exploration. The terrain is higher and harder to land on.”

But regardless of where you go in the Andes, even if you don’t choose to fly with Powder South and instead opt to ski in one of the resorts or maybe hike a peak or two, Mujica says that everyone with a passion for skiing and snowboarding should try to make turns in the Andes at least once in their life.

“You should give it a try,” he says. “It is hard for people to give their summer toys up, but if you love powder, then you will love to ski powder in the middle of the summer. The Andes have definitely been the best skiing in my life.”

With operations in Chile and Argentina, Powder South Heli Skiing offers a variety of packages, from three-day value deals to fully private helicopters and a guide that will deliver you and three of your closest friends an experience you’ll never forget. Of particular note for budget conscious travelers is their heli-assisted ski touring package, where adventurous and motivated clients get a heli “bump” into zones with excellent touring and accessible descents for a day of hike-accessed skiing.