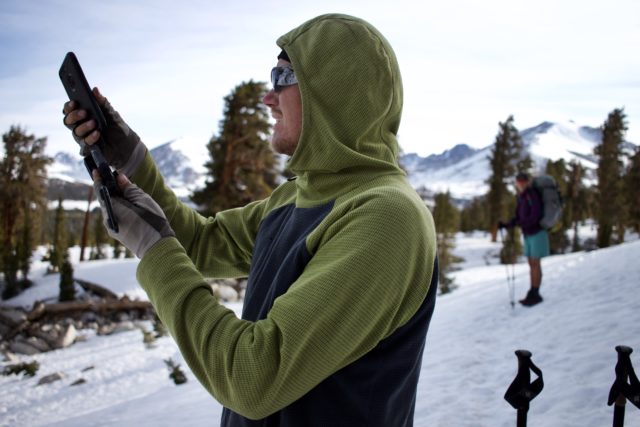 I was 26 when I received my Melly from my coworker, Connor, an eclectic van-dweller. I’d recently moved to Utah to work as a field guide for a Wilderness Therapy program and had just gotten off my first shift. (We worked eight days on, six days off.) I nervously stood there, in the parking lot of the program’s basecamp, staring over at Connor’s home. The van looked beat and bleak, covered in muck and stickers, sitting there sunken and weary as though on the verge of collapse. The rear doors were open wide and Connor was leaning up against his makeshift wooden platform bed. It was vanlife if I’d ever seen it: no hashtag, no perfection, no fleeting sense of admiration. His untended-to fingernails combed through his greasy blonde mullet. His shirt was spotted in tofu-bacon grease and his pants were the only ones he owned. He wasn’t wearing any shoes. Neil Young blessed the scene from the busted dashboard speakers. Most of us were living out of vans or at least living in houses with four or five others, so Connor wasn’t much of a surprise to us and, besides, we hadn’t gathered there because of him or his van. We’d come for the delicious feast of the eccentric micro-fiber goodness carefully stacked underneath his perched arm: the Mellys.

A Melly is a seemingly ordinary hoodie with a whole lot of hype. They’re made by the reclusive Leadville company, Melanzana, and officially named the “Micro-Grid Hoodie,” though everyone knows them as “Mellys.” Its marsupial pouch, checkered texture and neck-gaitered hood has become a cult symbol of exclusivity among outdoors-people, an undeniably righteous possession that signals insider knowledge, often surrounded with quasi-satirical hype that sanctifies their products with immortal capabilities.

Mellys aren’t just something you own and wear, but something that makes you one of the cool kids. From dirtbags to ski bums, guides, thru-hikers, wanderers and explorers of the unknown — people take them from crammed Subarus in Yosemite Valley, to towering slickrock in Indian Creek, to rocky Atlantic outcrops, and all the rest stops, pit toilets, gas stations, diners, valleys and rivers in between. You begin to see life in terms of Before Melly and After Melly as the two of you become one, all the while beckoning the attention and admiration from those around you, pulling you aside or shout from mountain peaks up high: “Hey! That’s a nice Melly!” Trust me, it’s happened.

Getting a Melly, however, is no easy feat — it’s become a right of passage in the outdoor community.

Connor had recently returned from what was once known as a “Melly run.” A Melly run was when one or several people would drive — in this case from Salt Lake City — all the way to Leadville just to buy Melanzana products. They would buy whatever had been “ordered” — in our case, eight Micro-Grid Hoodies — and then bring them back to eager friends and coworkers. People would do so because the company doesn’t sell their products online, at any other stores or over the phone. Unless you want to pay two- to three-times as much on eBay, you’ll have to drive to Leadville, cross your fingers what you want is in stock and then wait in line at the cash register. New company policies, however, have made Melly runs a thing of the past.

At its core, the Melly hype goes beyond mere exclusivity. The founding principles of this cottage company are something many in the outdoor scene believe to be worth standing for. The image that Melanzana gives off is pride: pride in local and sustainable production, in values that transcend for-profit capitalism, in high-quality goods and in economic growth in small mountain towns. It’s admirable, to say the least, and it’s the exact reason why a thru-hiker would carry a 12.5-ounce Melly for five months when there are so many lighter-weight options.

Melanzana is a self-proclaimed “rare beast of a company.” Started in 1994 by Fritz Howard and initially named Eggplant, the company found its roots in its mission to be a local, simple and affordable outdoor clothing company in a real mountain town. Far enough from the tourist hubs of Vail and Summit County, Eggplant found home in America’s highest town, Leadville. Soon after, due to a trademark conflict, Eggplant became Melanzana —still “Eggplant,” only in Italian. The company grew and moved, moved again and grew some more, eventually settling down in its current location — a 7500-square-foot building where they hand-make every product in-house from Tennessee-based Polartec fabrics, operate 100-percent on solar power, and reportedly pay and treat employees well. In recent years, Melanzana has seen exponential growth and has doubled its production since 2018 to a point where they can barely keep their shelves stocked. Hence, the death of “Melly runs” and the new one-customer-two-Melly purchasing policy.

Although the opportunities for expansion couldn’t be clearer, the company puts up a staunch fight against any publicity in order to subdue the still-increasing popularity. They’re known to refuse interviews — as they did for this article — and when asked to comment, Melanzana responded via email that they’re trying to avoid promotional opportunities due to the high demand. (Sorry. Reader: use your discretion when considering buying a Melly.)

Over the phone they mentioned customers are often disappointed when they drive to Leadville only to realize that their size (let alone desired color) is unavailable. When asked to verify their current inventory, the employee was reluctant to do so due to the constant flux. They’ve added  “traffic lights” to their website that depict inventory levels, and at the time of writing this, all lights were either red or yellow, with a single green light for the Micro-Grid Dress.

It’s a fairly revolutionary concept, limiting a company’s growth for the sake of maintaining sustainable production levels. When Fritz Howard arrived in Leadville and slept his first two winters in a hand-sewn tipi, Melanzana grew from his conviction to stay humble and produce high-quality, simple and affordable outdoor gear. So far, despite the continually increasing demand, the company has kept with their mission and continues to include sustainability and ethically sourced fabrics as a part of their business.

As the future unfolds and Colorado’s outdoor industry continues its economic boom, Melanzana’s biggest challenge will be navigating its unwanted popularity. Its products are good — but to stay relevant, it’s the character of the company that will continue to set them apart.

Despite the hype, the day I got my Melly nothing within me changed substantially. Sparks didn’t fly, emotions didn’t run high, and I definitely didn’t become a better climber, skier or writer. However, my Melly did come with me wherever I went. It’s been there for 250 trail days. I’ve burned it, melted it, cooked in it, fell in love while wearing it, changed in it. I’ve used it as a pillow, as a hip cushion and as sun protection. My Melly has been there for me, and my appreciation for its quality has never ceased. Sure, I’m biased (I’m even wearing it as I write this), but Mellys are about so much more than the American-made fabric and its hand-sewn stitches. People truly believe in Melanzana and its cottage company operational principles. They stand by the notion that if we produce good shit, and we make that shit last, and we don’t mess up the environment, that maybe, just maybe, we’re actually taking our capitalistic overlords for a run, exerting the notion that growth for growth is the ideology of a cancer cell.