Weeks earlier, three Boulder climbers — Jonny Copp, Micah Dash and Wayde Johnson — were killed in an avalanche while approaching a new route they’d scouted on the face of Mount Edgar, a sheer, jagged, fin-like 6,000-meter peak in the Chinese Himalayas.

Jonny and Dash were “alpinists of the highest level,” Alpinist magazine wrote the week following their death. “Displaying the combination of technical difficulty, alpine style and remote location became [Jonny and Dash’s] trademark.”

Johnson, a filmmaker, hadn’t planned on summiting with the duo. He was on the expedition as a producer for Sender Films to document the pair’s first ascent.

Back in Colorado, it hadn’t taken long for Jonny, a Southern-California kid, to make his mark on the climbing community, and for people around to notice. After moving to Boulder in the early ’90s, he set a winter speed record on the Diamond in Rocky Mountain National Park, and pinned his name to numerous first ascents and linkups in the most revered mountainscapes — Patagonia, Pakistan and Alaska, to name a few. In 2009, Alpinist reported, “Copp represented alpinism at its most impeccable and most futuristic, bringing the traditional philosophy of a rope, rack and a pack to some of the world’s most challenging peaks and walls.”

It was during a different, earlier trip to the Himalayas that Jonny had “The Idea.”

“You know how it is — when you’re out in the backcountry, good ideas come to you,” Abbey Smith, Jonny’s close friend and climbing partner, recalls. It was in a tent that he first “scratched down ideas for a community-oriented and community-built film festival. He wanted to showcase the stories and experiences that we have out in the world.”

Jonny had built his life standing at the intersection of adventure and storytelling, thumb out, ready to catch a ride in either direction. “We’d said farewell to girlfriends, been dumped by girlfriends, passed on career jobs, and cobbled together a living based on a mix of photography, writing, and weird one-off jobs to supplement the odd (and well-below poverty line) sponsorship check,” Pete Takeda, another close friend and climbing partner, wrote in a memorial essay for Patagonia. Takeda was part of the recovery team that sifted through the avalanche debris on Mount Edgar following the accident.

In 2004, Jonny set in motion what would become one of the widest-reaching adventure film festivals in the world. Rather than prioritizing how much adrenaline a film could pump — a common practice in the adventure industry — Jonny envisioned a collection of adventure films that dug into the core of the people undertaking adventures and the essence of the places into which they traveled. “He saw a void in terms of the depth in [adventure] storytelling,” says his sister Aimee.

“When he walked into the room, everyone lit up,” says Smith, who now manages the festival’s PR. “When he had a good idea it wasn’t hard to get everyone behind it.”

Jonny’s energy was contagious. Early on, he coined the festival’s slogan “Make your own legend,” meaning “follow your dreams, do something you’ve never done before, explore, reach past what you could do in your own life,” Aimee explains.

When Jonny died a few months prior to the festival’s fifth anniversary, the team was faced with a decision: to continue or to pause the operation? “When people experience tragic loss they have moments of clarity,” says Aimee, “and I definitely knew that I wanted to create a foundation for my brother and have that foundation continue the festival, in his honor and to continue his legacy.”

In the near-decade since, the tight-knit festival team — comprised of family, friends and a fleet of volunteers — has wholeheartedly dedicated itself to building upon Jonny’s mission. They’ve grown the festival around the globe and deepened its commitment to telling stories laced with adventure, but focused on social and environmental messages.

In keeping the festival alive, they’re not only keeping alive Jonny’s spirit, they are still growing his influence.

The magnitude of people that report being affected by the festival still shocks Aimee. Their mom, Phyllis, shares that they’re actually planning to create a film about how the festival has impacted attendees. Aimee says her family is now close with a man who credits the inspiration he found at the Adventure Film Festival with helping relieve suicidal thoughts.

“Sharing stories really has the power to inspire and spawn real change. That was basically the platform [on which] he started,” says Smith. “We’re trying to go through the power of storytelling to open people’s eyes.”

While many of the films at the festival profile expeditions or athletes, some dig straight into socio-political issues. Water Warriors, for example, is a documentary about a Canadian community’s successful fight against the oil and gas industry. Director Michael Premo says its place within an adventure film festival is invigorating. “It’s a really exciting way to take people to places they wouldn’t normally go and break them out of their routine.”

One of the most powerful aspects of a film festival, according to Smith, lies in its ability to make people think beyond their experiences. “When you bring people together to experience a film, it starts a conversation and [you can experience a] shared reaction.”

Aimee agrees, “Film has a way of showing people a place, culture, cause or issue that they might not have experienced first person. … Through storytelling, they’re able to actually experience and understand the complexities, and honestly start to care.”

This year the team focused on “finding and curating a playlist of films and programming … that feature people of color, women adventurers, and those minority groups that are not fairly represented at these types of festivals,” says Aimee.

All together, the weekend is designed to stimulate your appetite for adventure and challenging the status quo. “From my perspective and in line with my brother’s mission, if we’re not really touching and inspiring people, than we’re not doing what we should be doing,” Aimee says.

If the length of one life can be measured by the reverberations it transmits across communities around the globe, one thing is certain: Jonny Copp sure is living long. 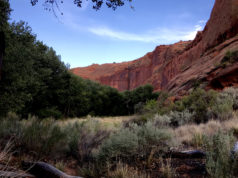