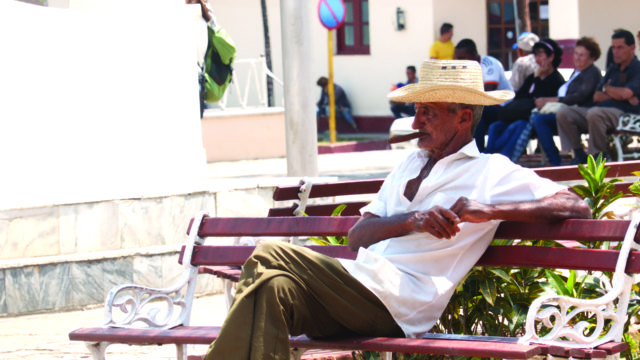 We’d been in Cuba for nearly four full days before a few of us felt brave enough to ask questions — honest ones — about the Cuban government, or, more pointedly, about life in Fidel Castro’s 57-years-and-counting regime.

We’d spent the previous three days, the first days of July, filming in the capitol — throughout Old Havana, along Paseo del Prado, in Plaza De Revolucion, at Bodeguita Del Medio (where countless personalities have gone for cold mojitos on hot Havana afternoons), in Hemmingway’s Finca La Vigía, through the Technicolor artists’ Elysium that is Fusterlandia, beside the Malecón.

On U.S. Independence Day, we filmed in front of the U.S. Embassy in Havana. In the summer of 2015, Secretary of State John Kerry traveled to Havana to officiate the reopening of the embassy that was closed in 1961 when the Eisenhower administration severed diplomatic ties with the government of Fidel Castro. Seeing the Stars and Stripes fly over the imposing Brutalist architecture of the embassy was an exercise in emotional awareness: There was joy at the easing of long-held tensions; there was shame it has taken this long; there was fear of culture-crushing globalization, of Westernization — of the return of U.S. imperialism to the island.

We’d talked to dozens of Cubans by this point. Some of us had played baseball with a small group of children in front of Hemmingway’s home. Some of us had walked arm in arm with residents of Old Havana as they’d shown us the way back to our casas particulares, talking about their families in the States. Some of us had sought sacred divination with Olorichas, the fully initiated priests and priestesses of Santería.

We’d gotten a feel for the warmth of Cuba. The people excitedly greeted us when we said we were Americanos. They repeatedly told us they were glad we were there. They asked if we would come back in the future.

Trundling south on July 5, leaving the comfortable embrace of Havana’s bustling streets, our 15-passenger busload of American journalists was en route to the Bay of Pigs.

The time felt right to ask the hard questions. What does all this mean? What was the reality of the Revolution? Do people trust Castro, or is he the despotic villain the U.S. government had made him out to be? Is he even still alive? Are people afraid to speak openly about Castro’s regime? What does the end of the embargo mean for Cuba? Do the Cuban people want capitalism? Will capitalism destroy everything that is unique about the “Pearl of the Antilles”?

“Alright,” said our tour guide Andy after a few questions made it clear that his group of gringos was ready to venture into political territory. “Let’s kill this pig now.”

Andy and our bus driver Jorge led our team — mostly CU Boulder students and professors — on a 10-day journey through Cuba, entertaining every question and opening up to us about their lives in Cuba.

From Havana to Cienfuegos to Trinidad to Camagüey with stops in between, our time in Cuba was spent retracing the early life of Guillermo Vidal, a Cuban who, at 10 years old, found himself in Colorado via what has been called the largest mass exodus of unaccompanied minors in the history of the Western Hemisphere: Operación Pedro Pan.

The evacuation program began shortly after Fidel Castro was sworn in as Prime Minister of Cuba in February of 1959. As Castro established an increasingly Communist regime, speculation and fear began to grow. Rumors spread that the new government would send children to the Soviet Union to serve in work camps. Cubans with the means to do so began to emigrate to the U.S..

In 1960, Father Bryan O. Walsh of the Catholic Welfare Bureau met a 15-year-old boy who had immigrated to Miami. The boy was living with relatives who were unable to provide for the teenager, and Walsh saw a need that was bound to grow as Fidel Castro built his new government and more Cuban parents feared for the safety of their children. With funding from the Eisenhower Administration, Walsh created Operación Pedro Pan to provide air transportation to the United States for Cuban children. In a time when U.S.-Cuba relations were tense at best, the program operated without publicity out of fear it would be viewed as an anti-Castro initiative.

Now, more than 50 years later, with the embargo on its last leg, Guillermo Vidal traveled with us back to his nation of birth to explore what all of this means to him, and perhaps more importantly, to the Cuban people.

Our visas required that we embark on educational activities while in Cuba, not just activities that directly related to our documentary.

We lucked out when we got Andy as our tour guide. The 31-year-old Guantanamero is not only a walking encyclopedia of facts about Cuba, he was also a never-ending fountain of positivity and mirth during our time on the island. On days when the thermometer topped out at 32 degrees Celsius and the humidity was not so much a theoretical percentage but an actual entity to wrestle with, Andy kept us hydrated and laughing.

Andy speaks four languages, and his English is tinted with an Australian accent, a byproduct of learning from Aussie professors at university. His wife is an economist, and they have 4-year-old daughter. Andy once taught salsa in Trinidad with a group of talented dancers, who later in our trip gave us salsa lessons and met us out in the famed city for a night of rum and dancing.

Perhaps it’s because we’re all the same age, but my roommate (to whom I am eternally grateful for getting me in on this project) and I became very close to Andy. We understood one another. We spoke the same cultural language, one of the late ’80s and early ’90s music that typified our childhoods and the early aughts fashion that characterized our teenage years. We yearned for the same things: a planet that knows more peace than war, a global dedication to the fundamental human right to education and health care.

Despite the fact our countries had no diplomatic ties during the entirety of all three of our lives, we had far more in common than we had differences. It felt like meeting a long lost brother. And I can say that everyone in our group, despite their age or upbringing, felt the same way, like Andy was a family member, someone to be trusted.

So Andy wasn’t annoyed when our blunt questions finally began to pour out — he knew they were coming, and he was ready. He started by talking about the time before Castro took power, during Fulgencio Batista’s reign.

Batista was the elected president of Cuba from 1940 to 1944. He became a dictator between 1952 and 1959 before being overthrown during Castro’s Revolution.

“Until Castro, the U.S. was so overwhelmingly influential in Cuba that the American ambassador was the second most important man, sometimes even more important than the Cuban president,” said Earl T. Smith, the former U.S. Ambassador in Cuba, during a testimony to the U.S. Senate in 1960. Smith claimed that nearly all aid from the U.S. to Batista’s government was in the form of weapons, which “merely strengthened the Batista dictatorship” and “completely failed to advance the economic welfare of the Cuban people.”

Cubans were starving. They were murdered by the thousands. It was a dark time in Cuban history, and the U.S. government was seen as being indifferent, even antagonistic, toward Cuban welfare and liberty. By 1959, U.S. companies controlled so much of Cuba’s resources — sugar lands, cattle ranches, mines and mineral concessions, utilities, the oil industry — that it was hard to believe the U.S. would do anything but support Batista, a man who made all this U.S. profit possible.

Castro’s administration was able to play on this view of the American government and garner support for the Revolution. And who could blame Castro or the Cuban people for wanting to be free, of both Batista and the U.S.?

Of course Andy wasn’t alive when the Cuban Revolution began, but he does remember the período especial in Cuba. The so-called “special period” began at the dissolution of the Soviet Union in 1989. It created an economic depression in Cuba as the Soviet Union was no longer able to provide Cuba with petroleum. Once again, many Cubans starved.

Andy lived with his grandparents in Guantanamo. He remembers having a happy childhood. He told us he never wanted for food, but in the early ’90s he began to notice things change around his house. There was a flower vase on the windowsill of his grandparent’s kitchen. His grandmother would fill the vase with rice to hold bouquets of plastic flowers. She would eventually feed the rice to the pigs.

But one day Andy came home from school and watched his grandmother take the rice from the vase and put it in a pot of boiling water for that night’s supper.

Andy recounted how during that time period, many Cubans were lashing together makeshift rafts to journey from Havana to Miami. This was just another wave of emigration out of Cuba. I remembered being a child and hearing jokes about Cubans floating to the States in old car tires. As Andy spoke of the “special period,” I began to cry.

So, Andy said, it’s impossible to summarize what every Cuban feels about Fidel Castro. It’s an equally impossible task to summarize what every American citizen feels about any current or former president. But what Andy could say was that Cuba had suffered deeply before Castro, and the Revolution had improved the lives of innumerable Cubans. Had Fidel been in power too long? Yes. Was he wrong about many things, like his persecution of the LGBTQ population? Yes, and even Castro himself has admitted to that. Could Fidel be dead? Of course. And the list goes on.

For Andy, an older millennial just like myself, Castro is a symbol of a past that, perhaps unfortunately, lingers on into the present. But the Revolution is not something to be dismissed. It was an experiment that has not entirely failed. The Cuban people enjoy relative safety (especially when compared to their Latin American neighbors), access to health care (though they are often in need of basic supplies, like ibuprofen) and free post-secondary education.

We knew, at Andy’s admission, that his job as a tour guide was, as most jobs in Cuba are, a government job. But I never questioned his answers. He rehashed topics and spoke frankly with us over and over during the remainder of our trip. Every conversation ended with smiles and hugs and a promise to continue at the next chance.

Five days later I cried once again as a plane lifted off to take us back to Miami.

The only question that really matters to me now is when I’ll see Andy again.