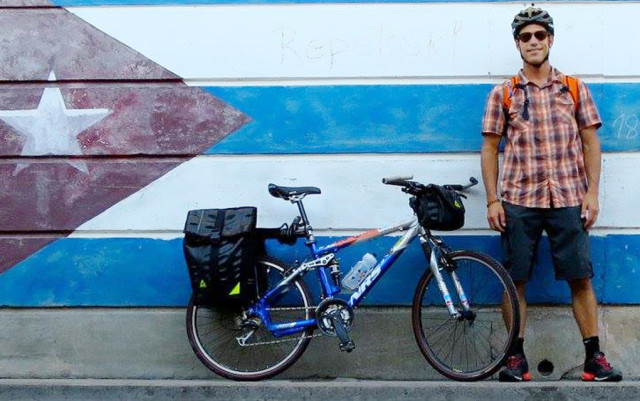 What do you do when you’ve got a couple of weeks to kill, you speak Spanish fluently and you bike like cars were never invented?

You bike nearly 850 miles across Cuba, obviously. At least that’s what Boulder’s own Ryan Van Duzer did last fall.

Not that he’d ever been to Cuba before, and not that he really had a plan beyond cycling east to west, from Santiago de Cuba to Havana. But that was kind of the point.
The bike advocate/TV personality/travel journalist/filmmaker usually has a pretty tight itinerary when he goes on an adventure these days — that’s just what happens when adventuring becomes your job.

“It’s not often I get to do something with no itinerary. It’s usually like, we’re gonna have lunch here, dinner here, be back at seven in the morning,” Van Duzer says. “This trip was like going back to my roots. I didn’t have an itinerary. Every single night I would roll out a map and think, ‘I could get to this city and this city.’ I put [the trip] together every single day, and it was really fun because it was totally free and to me, that’s the essence of travel: you don’t know what’s gonna happen or who you’re gonna meet.”

Van Duzer has done a number of long-distance bike tours across Latin America, starting with a bike ride from La Esperanza, Honduras, to Boulder after he finished a two-year stint in the Peace Corps. That trip, he says, was his first experience riding long-distance, and it catapulted his career as a travel documentarian.

It all began in 2006 with a cable access show on Channel 54 in Boulder, and it parlayed into appearances on National Geographic’s 13-part web series about trekking through the Himalayas, dozens and dozens of videos for the Travel Channel, a bicycle travel series for the History Channel, three sponsored bike trips across the U.S. and a hosting gig on an international contest called “Paradise Hunter.”

And those are just the highlights.

Van Duzer says he’s wanted to ride his bike across Cuba for a while; folks had told him it was a great place to ride a bike, but perhaps not for the reasons many Americans might think.

“It’s incredibly safe,” he says. “There are no narcos, there are no guns, there’s no violence, no gangs, none of that stuff that plagues most of Latin America. It’s easy to breathe there. You’re not looking over your shoulder. I’ve been robbed in Guatemala and Honduras. In Cuba if someone’s chasing you, it’s to talk to you or take you dancing.”

While Cuba’s terrain is mostly flat with rolling plains, the main island has rugged hills and mountains. (Cuba, for the record, is an archipelago.) The Carribean nation has three major mountain ranges, with its highest peak, Real de Turquino, rising 6,578 feet above sea level. A number of the large cities Van Duzer rode through — Santiago de Cuba, Guantánamo, Sancti Spirítus and Cienfuegos — are home to the highest peaks in the country.

Perhaps more important to a road biker than varied terrain offering mountain views and sea-level sunsets, is the relative absence of cars.

“It’s very expensive for people to have cars [in Cuba],” Van Duzer says. “When I was flying in, I looked down and there were barely any cars. It was almost like a zombie apocalypse. I had done some research beforehand on blogs, and people said the same thing — there’s not much traffic. As a bike tourer, it’s nice to not have traffic zipping by you all day long.”

Fully embracing the spontaneity of this trip, Van Duzer put a call out on Facebook to see if someone would donate a bike that could A) handle an 800-plus mile ride and B) not return after the journey was over.

Van Duzer planned to give the bike away at the end of the trip, and, like the rest of his excursion through Cuba, who was to receive the bike was really up to fate.
“I did always know I was gonna give the bicycle away,” he says. “And I knew the world would present this person to me.”

A friend offered Van Duzer a full suspension mountain bike by Giant, which he gladly accepted. The fit certainly wasn’t perfect (a bit small), and riding a mountain bike on paved roads requires more rotations than a road bike. But the challenge was nothing new to Van Duzer, who rode across the U.S. on a cruiser bike in 2009. (Yes, the cruiser even had a bell.)

So Van Duzer disassembled the mountain bike, boxed it up, packed a bag and set off for Cuba “the old school way,” flying first into Cancun, Mexico, and then to Havana in late October. A 16-hour bus ride got him to the starting point for his bike ride: Santiago de Cuba, the country’s largest city.

Over the course of 20 days riding the length of Cuba, Van Duzer met a lot of people. Instead of bringing a trailer to sleep in like he normally does on long bike trips, Van Duzer stayed in casas particulares, homestays that one could compare to the American bed and breakfast. After a long day of riding, Van Duzer would roll into whatever town he’d chosen as the day’s final destination, then he’d ride along looking for signs indicating a home was open for such a stay. Van Duzer says the cost was typically between $15 and $25 for a night, with a meal usually provided.

The people who opened their homes to the American cyclist were more than gracious (and speaking Spanish certainly didn’t hurt). They wanted to have dinner. They wanted to hang out and talk. Van Duzer says it was a daily occurrence to meet people he “really connected with.”

He recalls meeting a particularly interesting character about a week into his cross-Cuba tour, just outside of Ciego de Ávila in central Cuba. While many Cubans ride bikes (see aforementioned expense of owning a car), this gentleman stood out to Van Duzer because he was on an American road bike.

“I see this guy riding a road bike, and there are no road bikes in Cuba. This guy looks different than other Cubans, who typically ride crappy Chinese bikes,” Van Duzer says. “He rides up next to me, and he’s psyched.”

The Cuban cyclist turned out to be 55 years old and “just full of energy.” He owned a farm and produced cheese, and, as if to prove this, he showed Van Duzer the contents of his backpack — nothing but cheese.

Van Duzer’s new friend invited the American back to his house to spend the night, and excitedly showed off medals from bike races in Cuba.

“You could tell he was so proud of it,” Van Duzer. “He tells me his name is Yutong. That’s the manufacturer of the buses in Cuba. It’s a Chinese brand and all his friends call him that because he goes as fast as the buses in Cuba.”

Van Duzer admits he’s not sure he ever got Yutong’s real name.

Most folks in Cuba ride bikes (or donkeys, or horse-drawn carts to haul their wares), so the people Van Duzer met didn’t think his journey was insane — unlike many Americans, tethered to their cars for myriad reasons, valid and imagined.

Van Duzer, who recently turned 37, didn’t have a driver’s license until he was 32 (“I still suck at driving,” he says, and his process of getting a license was the subject of a short documentary called Driven), and he still doesn’t own a car. So the Cuban way of life embodied what Van Duzer has based his career around.

“I try to show people you don’t need a rocket bike to do these bike tours, you can use an everyday bike,” he says of his bike advocacy. “Let’s go out and ride, people.”

And though his cross-Cuba ride was “mostly about having an adventure and sharing great stories,” Van Duzer never goes on a journey without charitable intentions, even if they’re small. Which brings us back to the fact that he planned to give away the Giant mountain bike he road across the country.

Van Duzer was back in Havana, planning to run the Havana Marathon (because an 850-mile bike ride just wasn’t enough), when he ran into fellow Boulderite Michael Sandrock while watching the children’s race the day before the marathon. Sandrock is the founder of One World Running, an international program that promotes health and fitness and provides running shoes to those in need in the U.S. and abroad.

One of Sandrock’s Cuban friends asked Van Duzer what he’d be doing with the bike now that he’d finished his tour.

“He says. ‘I’m a school teacher, I teach gym, the school is really far away from my house,’” Van Duzer recalls. “Done. It’s yours. I’m a quick shopper. Within like a minute and a half I decided this guy’s gonna get the bike.

“Even if you have money, you can’t get Western bikes — it’s almost impossible,” Van Duzer says. “They don’t sell them, so it was great to give this guy a bike. I don’t believe it’s going to change his life, but it’s going to enhance his life.”

On a broader scale, Van Duzer says Obama’s plans to lift the economic and travel embargo on Cuba will enhance the entire nation’s way of life — even while some Americans voice concern about what this will do to Cuban culture.

“The thing is, [Americans] don’t want it to change, but the Cubans want it to change,” Van Duzer says. “For us it’s selfish to say it shouldn’t change, like it’s some sort of a museum. But there are living people there. They want what the rest of the world has, and they have every right to it.”

This concern, Van Duzer says, might have something to do with how little Americans know about Cuba.

“Cuba is amazing,” he says. “Growing up, you equate Cuba with bad, dictator bad, communism bad, but it’s a fascinating country. People there don’t have a lot, but you have everything you need, unlike Honduras, where I was a Peace Corps volunteer. Every person on the island of Cuba has access to college; every person on the island has access to healthcare and three meals a day. In Honduras, most kids go to sixth grade and that’s it — there’s tons of violence and murder all the time. Healthcare is nonexistent. But in Cuba, they actually take care of you.”

And because of this, Van Duzer says he doesn’t think lifting the embargo will change Cuba’s core values.

“I have a feeling… I don’t think it’ll change all that much,” he says. “I think Cuba has a good thing going. Maybe it’s just my optimism, but I don’t see Cuba becoming the next Cancun. It’s too ingrained in their culture to just change overnight.”