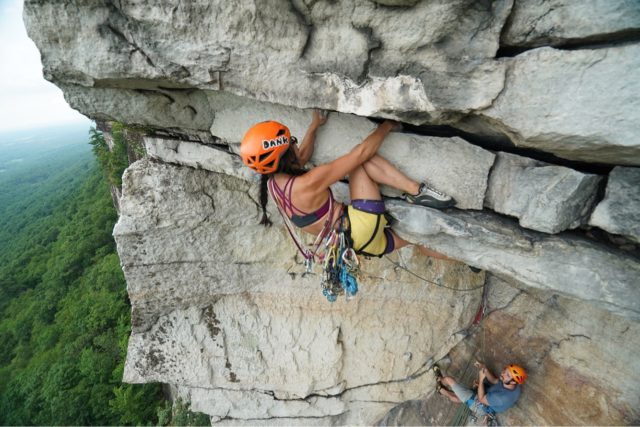 It’s just after 6 a.m. and Aisha Weinhold is sitting at her desk with a cup of coffee. She looks out the kind of window that would make any office-bound worker swoon: nearly floor to ceiling, wider than arm’s reach, with Aspen Mountain neatly framed and its ski runs in plain view. The Roaring Fork River cuts through the lower right-hand corner of the scene. When you’re on the indoor side of outdoor business, this isn’t a bad gig.

NPR’s Up First credits fade as Weinhold flips through a hardcover planner. As founder and executive director of the largest female-focused adventure film festival in the world, no day looks quite the same. Most mornings, like today, she scrolls through other news sites and outdoor industry media, updates projects and gets down to the important business while she’s still fresh: brainstorming next-steps for projects simmering on her back burner.

Next she meditates, letting the ideas settle in and evolve.

Soon after, she pumps Ke$ha throughout the house. It’s time to roll up her sleeves and make it happen.

“I want to see women existing in a way that defies the dominant narrative on the big screen,” she says. 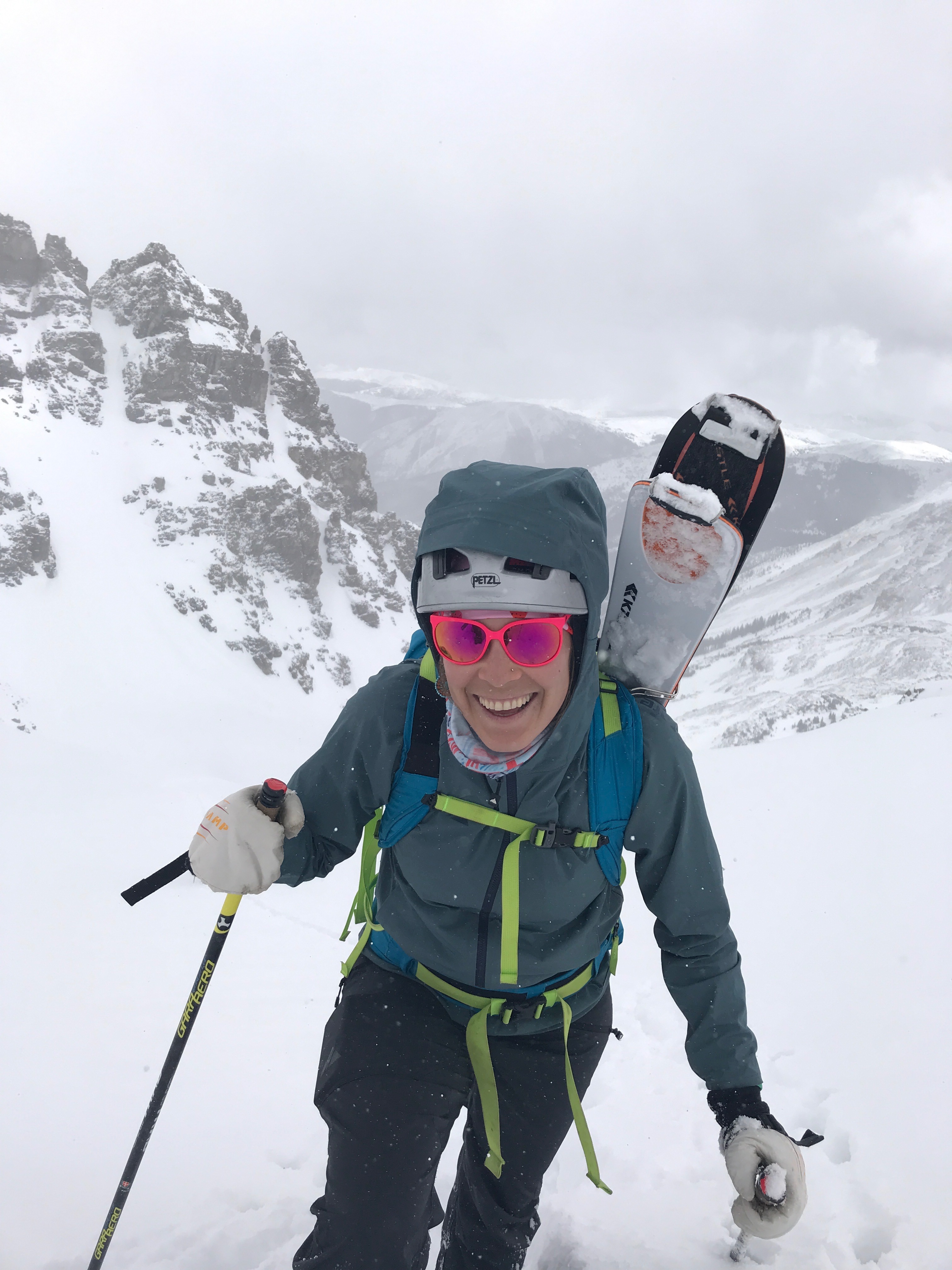 A large part of Weinhold’s job is dreaming — imagining what does not yet exist — and then making those dreams a reality. “It’s our duty as human beings to give our dreams and aspirations as much weight as our day-to-day decisions,” she insists.

So when the idea for an adventure film festival that celebrated the accomplishments of non-male, non-white people struck (she was sailing across the Pacific Ocean at the time: “It felt as close to a divine calling as a Buddhist 18-year-old could experience”), there was only one direction to go: Create it. In 2014 No Man’s Land Film Festival (NMLFF) was born, and now it tours the world.

Weinhold grew up steeped in the outdoor industry, skiing Aspen’s winter slopes, then climbing, biking and running around Carbondale the rest of the year. Her middle-school bedroom walls, plastered with female surfers and faraway mountainscapes, hinted at the woman she wanted to be: bold and brave, rafting down a class-five river, but equally comfortable in cowboy boots, a sundress and gemstone earrings at the post-run barbecue. No single role model fit her bill.

The 5Point Adventure Film Festival debuted in her hometown in 2007. Over the years, the festival made quite an impression on her.

“I would scour the program for films with women, see if the filmmakers were attending, then arrive early to grab a seat so I would not miss a single expression,” she says.

5Point is known for showcasing documentaries about human adventure feats (think extreme kayaking or slacklining or base jumping), and for a long time the programs included mostly, if not exclusively, white men as the protagonists.

“I left every film festival with a feeling of disappointment and confliction that I still feel today,” Weinhold says. In the same vein as 5Point, other premier outdoor industry film festivals, like Banff Mountain Film Festival and Telluride Mountainfilm, have traditionally let narratives of white men dominate the screen, effectively passing the stories of non-male, non-white people under the public’s radar.

“The men on the screen are incredible athletes and amazing characters,” Weinhold says, “but I remember leaving every year and thinking that if I wanted that in my life, I would have to marry into it. No Man’s Land was born from a deep void that no one else was filling, so I decided to do it. I knew that I couldn’t be the only one who was feeling like my story was so grossly underrepresented.”

In the past three years, NMLFF has regularly sold out venues across the country, hosted its own multi-day flagship festival in Carbondale each fall, and toured internationally. Next week, select films from NMLFF will be screened at Neptune Mountaineering, and Skye Habberfield, the store’s marketing manager, has long been excited about bringing NMLFF to Boulder.

“Neptune has classically brought in all the old-timers and legends of the sport,” he says. “It’s really neat to see a film festival not [only] focused on women, [but also] on the up-and-coming women in sports.”

As the tour growth and full houses indicate, response from the public has been resoundingly positive. Initial logistical kinks of orchestrating a film festival have largely smoothed out — no more last-minute scrambling for rental auditorium chairs or scheduling mishap nightmares — as the festival grows. But the challenges have changed.

“Our newer hurdles feel stickier,” Weinhold says. “A major challenge that we have been working to address is diversity.”

Now that the films tour the globe, “choosing films that speak to a broader audience is imperative,” she explains. “As soon as I felt like we were at a place where we had enough films featuring women, I realized that the majority of the time on the big screen was taken up by the same kind of women: white, straight and 25-35.”

Weinhold doesn’t want to fall into the same trap the prior generation dug itself into, even if it’s a trap made and run by women.

“While we always have some outliers, we are now working to make all of our programming a collection of outliers. Over the last few years, more content has been produced featuring women of color and women beyond the ages of 18-30. This year we are looking for content that speaks to another definition of woman. We are looking for films that speak to the trans and LGBTQ movement. Our obstacles are changing on the daily, but ultimately we want anyone who loves a woman, knows a woman or feels like a woman to feel at home and represented at No Man’s Land.” 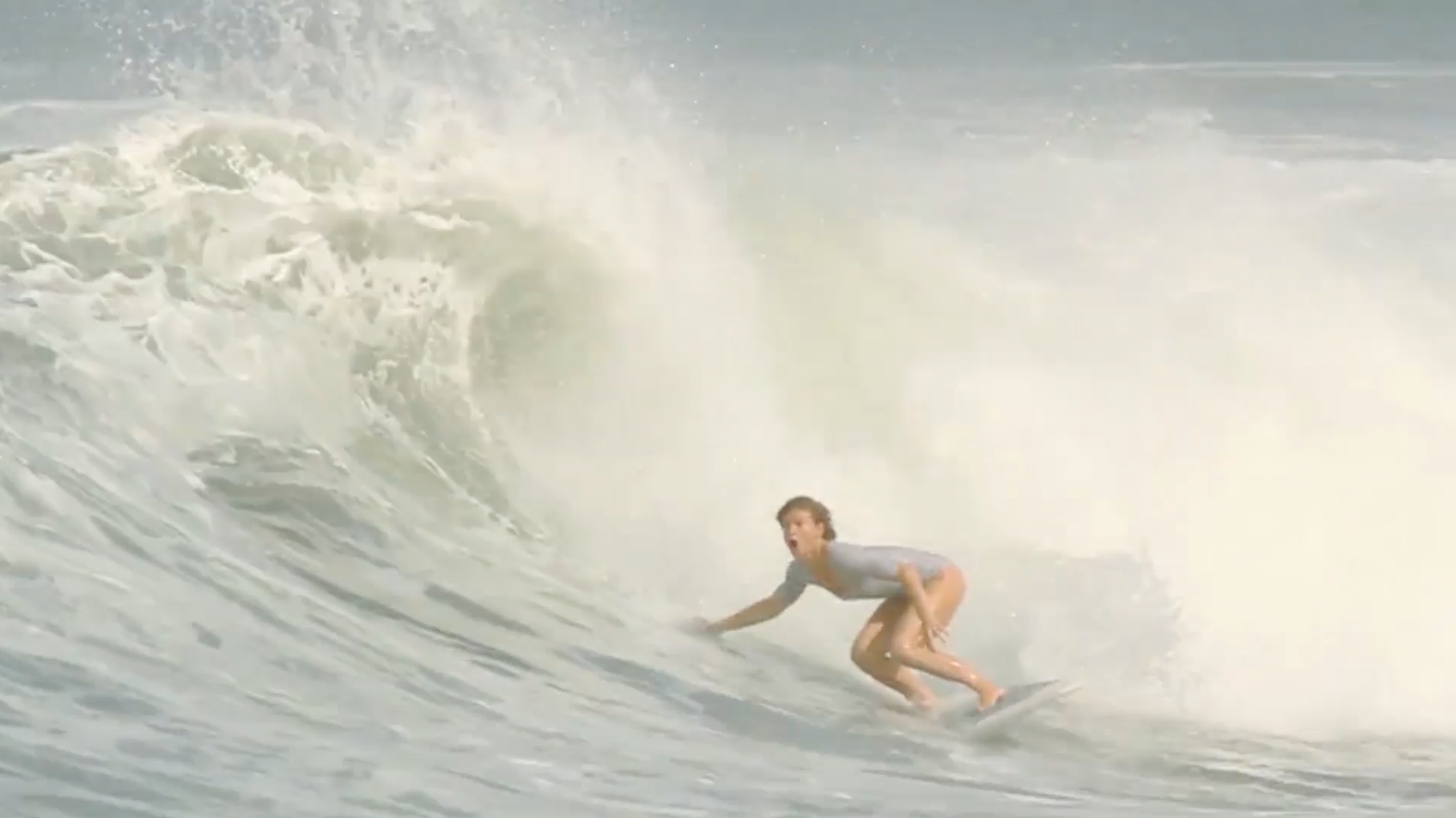 Weinhold wants to be an example to the rest of the industry, and by extension to all of society — celebrating outliers is not just a trend, it’s meaningful work that resonates with large audiences. “We are a growing and evolving space in the outdoor industry,” she says. “The films that our platform (is) based upon are but a shadow of the tremendous intensity, passion, grit, genius and drive that all women carry. Beyond the big screen is where the magic really happens.”

As Kathy Karlo, NMLFF’s tour manager and event coordinator, puts it, “Our goal is to empower our audiences and challenge them to redefine femininity in adventure, as well as their daily lives.”

In addition to the films and a presentation by Weinhold, the Neptune Mountaineering program will benefit three female-focused adventure organizations: She Jumps, Women’s Wilderness and Camber Outdoors.

“It’s not something we’ve really done before, and we’re really pumped on it in that regard,” Habberfield says.

But not everyone in the industry has been so supportive of NMLFF and its mission.

“I am tired of explaining why it’s important to have women on the big screen and to have their accomplishments widely shared,” Weinhold says. “I am tired of hearing sponsors say, they ‘believe in the cause,’ but then put no action behind it. I think it is pretty safe to say that most people believe in ‘the cause.’ The cause being… women?” 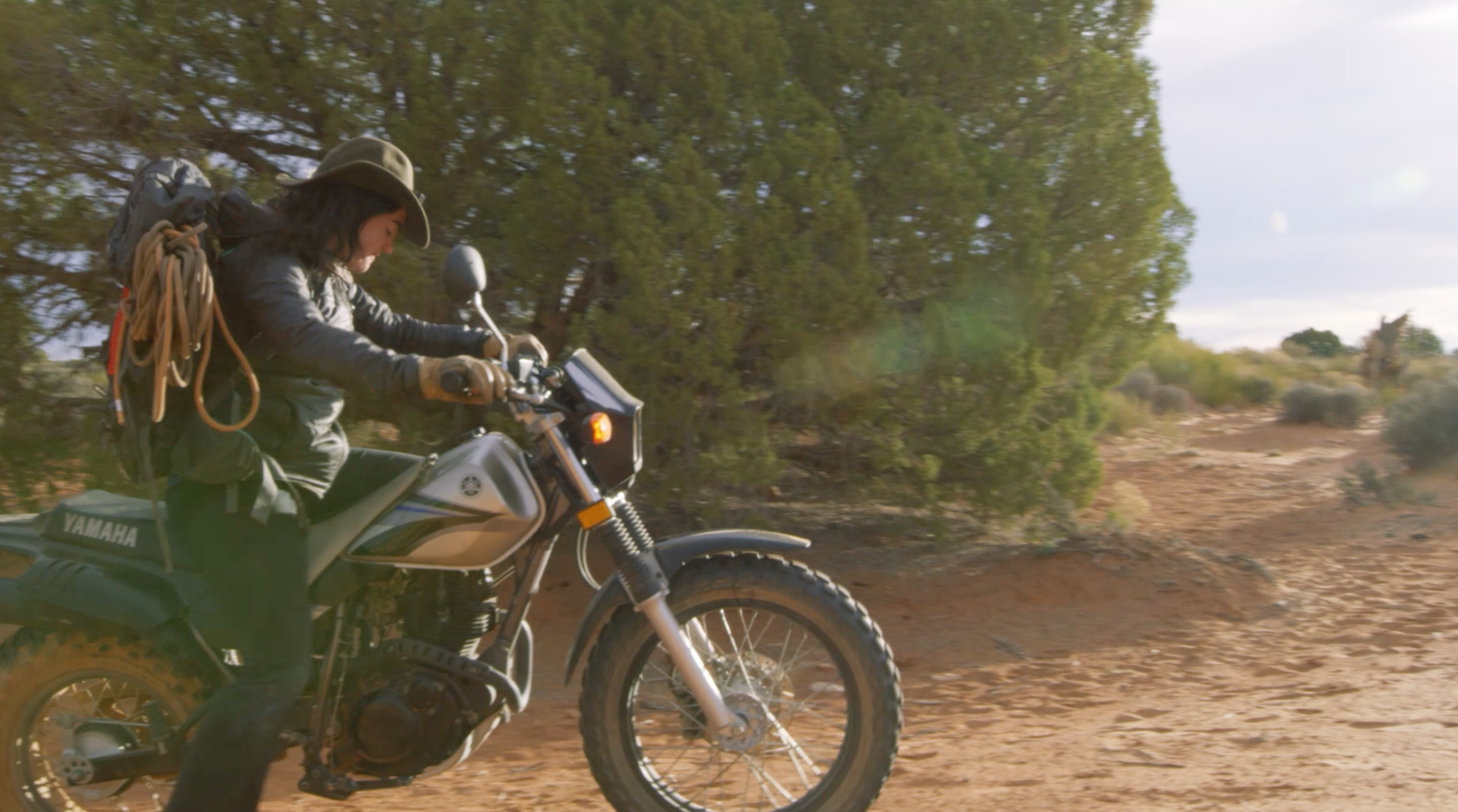 The films included in NMLFF confidently stand beside those shown at Banff, Mountainfilm and 5Point — the only difference is all the base jumpers and rock climbers and surfers featured in the films are female. In her experience, Weinhold says, “People hear ‘women’ and they look down, they become distracted, or they quickly hand over a card and say the classic line of, ‘I love what you guys are doing, let’s be in touch.’”

Weinhold won’t let these attitudes slow down NMLFF, but continually working against the current of the dominating industry is taxing. “We’ve also been told that our platform is nothing more than a trend, that we came in at the right time and we got lucky,” she says. “I started No Man’s Land because I wanted to see more women getting the respect that they deserve within and beyond the big screen. The NMLFF team continues on today because we believe that we have created a powerful avenue for new conversation, new media, new ideas and ultimately change.”

In 10 years, Weinhold says, “we hope NMLFF won’t need to exist and an all-female adventure film festival will be a nicety, nothing more than an apologetic glance back at a stagnant and troubled past.”

Which is why, at her home, on her desk, Weinhold moves between planners and journals with colored pens that sit below her window to the outside world. Her skis lean against the side door. She could be riding down the slopes that rise before her eyes, but she types away excitedly, another idea hitting the page. How will the next puzzle piece fit to transform and influence the next generation of adventure athletes?

Who knows, a present-day incarnate of eight-year-old Weinhold might see the next NMLFF screening. Maybe she’ll find that role model Weinhold always missed. 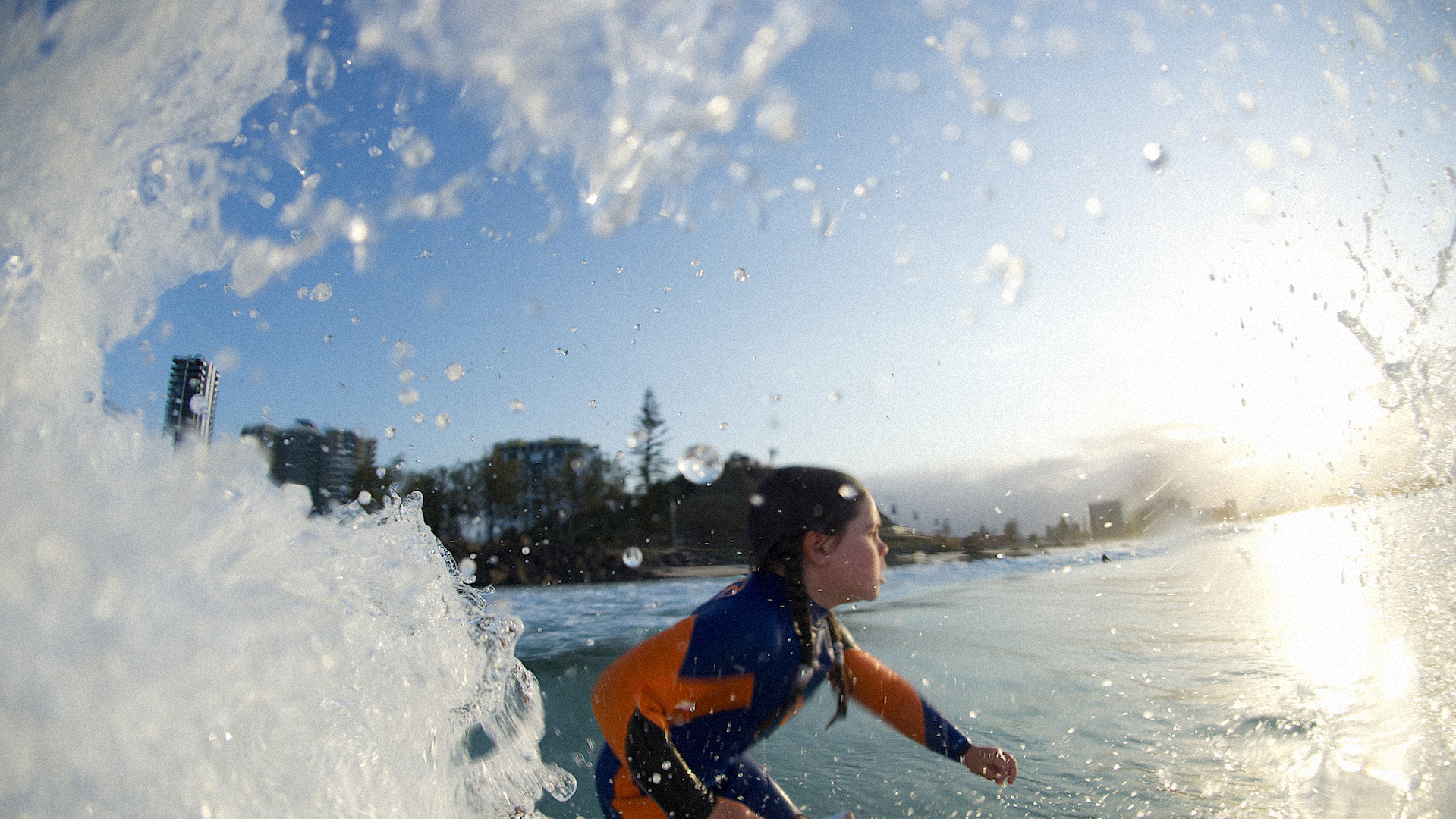