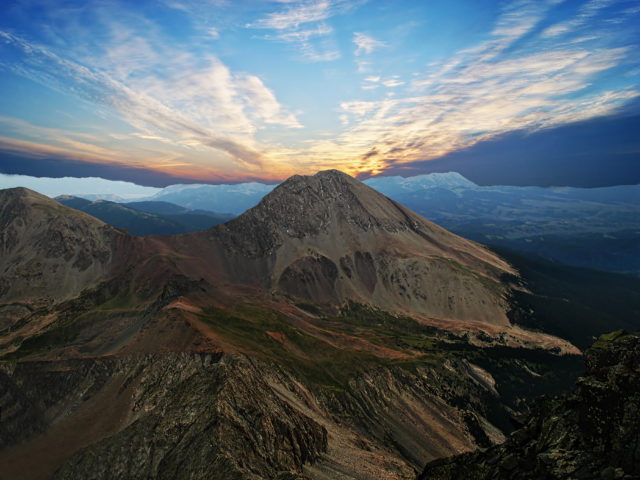 I will wager Sir Isaac Newton wasn’t a climber, but mountaineers do share bonds with the great mathematician and physicist. For instance, he discovered gravity, a topic of extreme interest to those of us hoping to avoid its effects.

We also share a wider focus on life’s quantitative side. Mountaineering’s status as a STEM activity is underappreciated, but consider this: We have seven summits and fourteen 8,000-meter peaks. Colorado has 53 14ers. Every state with 100 mountains has a Top 100 Mountains list. We quantify crux moves, follow numerical grade and class systems, and use measures such as topographical prominence to determine if a mountain even is a mountain. We develop equations simple as calculating elevation gain per hour or complex as Colorado author and climber Gerry Roach‘s R Point “efferculty” system. Wrap your head around that and you’ll be capable of levitating yourself through sheer mental power, thus saving wear and tear on your boots.

An additional factor in our misunderstanding how central math is to mountaineering is our difficulty grasping what math is. As Dr. William Bricken notes in his Iconic Math, it isn’t pages of long division worksheets—it’s actually a “visual and experiential” activity. That is exactly how mountaineers apply it in the hills: How many feet higher is the summit? How long before that storm blasts us with lightning? What bearing gets us out of this freaking whiteout? Employing that broadened definition, we peak-baggers should give ourselves a hand. We’re honorary applied mathematicians.

For help in analyzing this quantitative data with which we wrestle, I bought my mountaineering friends a round and asked this question: “Of all the calculations you use in mountaineering, which do you find most important?”

The clear winner was “the crux”, since that rating determines whether a team even possesses the skills needed to reach the top. But the question struck a chord, extending over several evenings, forcing me to buy so many rounds my son’s meager inheritance was at risk.

During these weighty deliberations, we classified quantitative considerations into three rough categories:

I’ll admit, recognizing how math permeates mountaineering initially took me aback. As most of us do, I entered the wilderness chasing beauty and that overwhelming awe raw nature inspires. To quote Emerson, “Have mountains . . . no significance but what we consciously give them, when we employ them as emblems of our thoughts?” Mountaineering incorporates lots of math, but at its best it should lead beyond rote calculation to the ineffable, to a sensation outside of words and figures. Undeniably, mountaineers overly focused on goal attainment end by confronting this equation: Obsessive focus on Peak X = – [aesthetic appreciation] + – [spiritual transcendence].

And the characteristics of a community insistent on calculating its accomplishments aren’t all pretty. Mountaineers have been known to be competitive, neglectful of relationships, and reckless when pursuing targets. Chasing lists can turn sublime experiences into a job. Two summits short of completing the prestigious Bulger List, my friend Jon Karpoff at times sighs in relief, imagining the day he will be “freed from the tyranny of the Bulgers.” He’s looking forward to a big bash once those last two peaks complete his accomplishment, but the peaks themselves? Maybe not so much . . .

My personal concerns are much more prosaic. I wonder how many miles I’ve traveled, counting my steps, monitoring breaths, and bypassing wonders. A unicorn may have gamboled past, ridden by Bigfoot and followed by yetis tossing lupines, all while I marched grimly on, staring down at my boots.

So I weighed the scales a bit before finally giving in and appreciating the prevalence of mathematics in mountaineering. Emerson might disapprove, but we could do worse than chasing milestones across the world’s grand mountain ranges. As Robert Browning says, “A man’s reach should exceed his grasp, or what’s a heaven for?”

Climber and psychologist Malcolm Bass notes that mountaineering engages our major psychological systems, building attachments within teams, leveling our emotions, and providing “a sense of direction, purpose, and growth.” My log of peaks provides me more than fond memories—it tells me what I’m ready to tackle next. All those numbers help us set challenging but achievable goals and serve as tangible manifestations of the drives that make mountaineering so addictive.

As with all scientifically grounded research, I hope this article provides the foundation for further exploration. For example, how does navigational technology alter our ability to problem-solve? Kids, there was an unimaginable time when people navigated from compasses and lines on a paper map. Using those abstractions, they created mental models of terrain often at odds with what their senses told them. What is lost when a GPS eliminates that tension between our rational and experiential selves?

Exploration of that topic requires deeper thought than you’ll ever get from me, so here are two additional areas of practical import:

First, since my main contribution to mountaineering is an ability to endure pointless suffering, I’d appreciate development of “The Suffering Index” so I can foresee what subhuman state I’ll be driving home in.

In tandem, the mountaineering community demands creation of “The Satisfaction Index,” an algorithm incorporating such elements as weather, views, the Knucklehead Ratio, bugs per inch of exposed skin, condition of rock or snow, amount of terror, and number of beers on ice in the car.

I leave it to my mathematically minded colleagues to advance this critical research.

Malcolm Bass’ comments on the psychology of mountaineers have been immensely helpful in developing my understanding of why climbers climb. Unfortunately, Mr. Bass suffered a serious stroke last spring. His family and friends have launched the Move Mountains for Malcolm GoFundMe