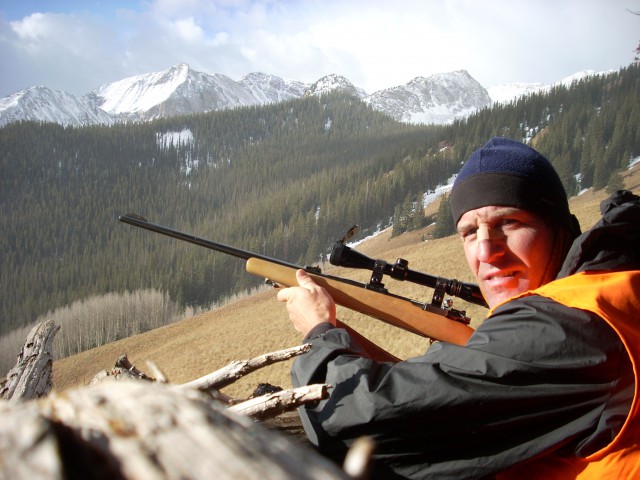 Not too long ago, we were in the meat section of our local supermarket looking at various cuts, deciding whether or not to go for the organic bison over the natural beef or just to settle for regular feedlot meat. In spite of the cost of the more expensive product, we were adamantly trying to buy organic, given the choice. It just makes sense to skip the hormone-injected meat, all other things being equal, we told ourselves. Alas, the price of organic meat is often a deterrent to the consumer, and we were waylaid in our decision-making.

A few months prior to this, I was invited by a friend of mine to join him in elk hunting this fall. He and his family live outside of Aspen, and he hunts every fall within 10 miles of his house, and has a successful hunt around 90 percent of the time. Of course, he grew up hunting in Michigan, so he has it in his roots, so to speak. I was convinced. It sounded like a sure thing: a day or two of work in exchange for 120 to 150 pounds of delicious organic meat to eat over the following year. Just think of the price of organic meat! Never mind that I had never shot anything larger than a raccoon and hadn’t taken a hunter’s safety course since my junior high school days in Longmont.

I don’t really have a moral dilemma with hunting the way some people do. I have caught and eaten a lot of fish, find fresh fish delicious, and am not bothered by the killing of a fish to eat. I feel the same way about hunting, although the thought of killing a large warm-blooded mammal somehow seemed in my mind to be a bit more challenging than killing a cold-blooded species. This notwithstanding, my decision to go hunting did have some gravity. I felt that if I was going to continue to be an omnivore and eat meat, I should then be prepared to take the life of the animal whose
meat I was eating. If I could not stomach the killing, then perhaps I
should not stomach the meat. In the same way, if someone is opposed to
hunting for meat, that is a fine decision, but they should not turn
around and buy farm-raised meat.

Another issue that arises every hunting season is trespassing on
private land to access public land, and the associated dilemma of
hunting close to residen-tial areas. Certainly, most hunters do not
endorse hunting in or near residential areas where it is a noise
nuisance and potentially a danger to the inhabitants. Most of the
hunters that I met were very respectful of private property, of hikers,
and of the community that lives around where they were hunting. This
being said, there are plenty of residences adjacent to the National
Forest, where hunting is legal and has probably been practiced long
before the adjacent residences were ever conceived or built.

In
Aspen, where we were hunting, these just happen to be homes worth tens
of millions of dollars whose inhabitants didn’t pay top dollar to hear
the sound of rifle shots off their back porch while they are eating
breakfast. This issue is a tricky one with no readily available
solution, given the precedent of hunting and its roots in the public
domain, coupled with the continued pressure of development,
particularly in areas near or adjacent to large expanses of open space,
often public land.

After
sorting out these controversies on a personal level, and convincing
myself of my future hunting prowess, I signed up with the Colorado
Division of Wildlife to register for an elk tag, a permit which allowed
me to hunt for an elk during a five-day period in October. I called up
my neighbor and asked to borrow his .30-06 big-game rifle and bought a
couple of boxes of ammo. My confidence high, I went down to the local
rifle range in Gunnison to site in the gun, which had new scope mounts
and needed to be adjusted. My first shot at the range, a target of 100
yards away, was about a half inch off of dead center, and I felt pretty
cool. Unfortunately, the recoil of the rifle meant that the scope —
freshly mounted about a half-inch behind the previous mounting — bumped
into my nose, skinning it, and it started to bleed. Rookie mistake. It
took me another 30 rounds of ammo to get a shot as accurate as the
first one, and my shoulder hurt for two weeks from the recoil of all of
the shots.

I had
drawn a permit for first rifle season, and I hoped to have a successful
hunt in the first day. After all, I was under the impression that you
simply had to get up early, hike up to a nice spot for elk grazing, and
sit and wait for the herd to arrive, then take one shot just after
daybreak. My first day, I was up at 4:30 a.m. and hiking around 5:30. I
was tucked into a nice little aspen grove at around 11,000 feet by
first light. I waited. And waited. And waited. Finally, almost three
hours later, I was stiff and frozen and had not heard or seen anything
save for a few birds and squirrels. So I headed down valley to meet my
friend, who had been hunting a few draws north of where I was. Of
course, he had already shot an elk and had it butchered and quartered,
ready for me to help him pack out.

Well,
I was just unlucky, I figured. Over the next three days, I logged eight
to 12 hours a day out in the woods in morning and evening sessions,
alternatively sweating up some rugged brushy pseudo-trail, or just
plain bushwacking, then sitting motionless in cold, sweat-soaked
clothing while the snowflakes fell from the sky, accumulating like
dandruff on my shoulders. My focus was astute, my listening acute, yet
I only saw elk once, and that was when I was 300 yards away and
ascending through the brush. They heard me long before I saw them, and
they disappeared into the dark timber within a second or two, long
before I could even unsling the rifle.

By
the third day, I was hunting up on Richmond Ridge, above and south of
the Aspen Mountain ski area. It was a blizzard, and I was about an hour
up a rutted and muddy 4-wheel-drive road, and another hour on foot to
the perfect elk spot. Alas, there were no elk there either, and it
ended up being simply a long morning of hiking and driving in the snow,
thinking of a nice warm breakfast of bacon and eggs. Perhaps the most
frustrating thing of all was to see elk prints, fresh elk scat, but no
elk. It was as if they moved through the areas just prior to my
arrival, then sat in the woods watching me and laughing at my bright
orange vest, waiting for me to leave so they could continue grazing.

At
the end of first rifle season, when my permit expired, I had nothing
tangible to show for my efforts but a scar on my nose, a sore shoulder,
and some lost weight from sitting for hours in the snow. The
intangibles were numerous, and not easily forgotten. I had a new
appreciation of the knowledge and skills required to hunt wild game in
their natural environment and an appreciation of the hunter’s patience.

I was also impressed by the amount of physical effort that is often required on a hunt.

Most
of all, I had a new respect for the elk, their wily knowledge of the
woods, their ability to outsmart a wellequipped human, to vanish at a
moment’s notice, and laugh at our clumsy ability to stumble noisily
through the forest.