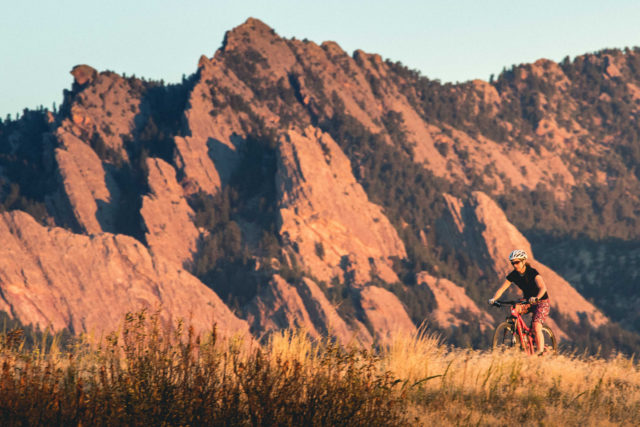 Fast forward a few years, and I have become one of those adults who loves riding bikes. When I’m ready to upgrade my mountain bike, it’s thrilling and terrifying. (Bikes cost more than a few month’s allowance these days.) I read reviews, demo bikes on Moab’s slick rock and Betasso’s singletrack, and I find a sweet deal at a local shop. I’m ready to commit. And then: “Sorry,” shrugs the guy at the register, “We only have the pink ones on sale.”

I feel like doing what I imagine my 6-year-old self would: jumping up and down and pouting — “But I don’t want the pink bike, I want the black bike!” When I calm down a little, I can take a more adult approach: The pink bike has all the same components and is constructed like the black one. It’s meant to entice a buyer who perhaps has been annoyed that black bikes were the only option for a while. I get it. But still. As a bike industry journalist, I know that women are an essential and integral force in the economy of bikes — and I don’t mean that they’re peddling products. They’re producing competitive events like enduro stage races, they’re donning welding masks and crafting frames and they’re involved in advocacy to get more people riding bikes in more places. Heck, even my mom is raving about cruising down the lakefront path in Chicago. Women have embraced bikes in an impactful way; they’re riding, they’re buying, they’re racing and they’re innovating. So, back to 6-year-old me — shouldn’t I get to decide which bike I want to buy?

This conundrum — let’s call it the “ladies night” syndrome — is something that Elorie Slater, owner of Boulder’s Sports Garage Cycling bike shop, has spent a lot of time thinking about. Even though the off-road cycling industry has begun to cater to women, it’s still sort of missing the point.

“At the risk of making broad generalizations, the ladies’ nights I’ve attended at bike shops have been primarily open house shopping events,” she says. “At best, they are good networking opportunities, and at their worst ladies’ nights make women feel pandered to. Last winter I became obsessed with creating some kind of women’s event at Sports Garage that delivered value where the value was needed.”

So, Slater founded the Women’s Off-Road Cycling Congress (WÖRCC). The inaugural event is Oct. 25 at the Pearl Izumi headquarters in Louisville, and if early ticket sales are any indication — close to 100 have already been purchased as of publication — these are politics people are eager to be involved in. WÖRCC will be structured as a meet-up style event with speakers and break-out groups, drawing inspiration, Slater says, from meet-up formats in other industries like technology, where relevant issues and innovation are being tackled in social environments.

The break-out topics at WÖRCC — from branding to backpacking to role models to race day —have been carefully selected to encourage a dialogue about the aspects of women’s off-road cycling that the industry might be missing. The time is nigh, says Slater, to address the inadequacies in the industry, especially since it’s already admitted that it wants the woman vote.

“In recent years off-road cycling manufacturers, and I’m thinking primarily of gravel, adventure and all mountain biking disciplines, have made some significant strides in the products and marketing aimed at female consumers,” she says. “However, the industry as a whole is more than just products: it’s the entire experience channel, including how women encounter the sport in the media, bike shop relationships, skills-building, competitive and non-competitive events, and more. And this entire experience channel, by many accounts, lags behind other outdoor industries such as rock climbing, hiking and camping in their outreach to women. People are asking, ‘How do we reach the females?’”

At WÖRCC, participants will craft an answer to that question, but not until they’ve answered their own: “As female off-road cyclists, what do we love, hate and hope for?” Slater hopes to compile the answers into a manifesto that she plans to release to interested industry parties later this year. If the input from WÖRCC speakers and break-out leaders Amy Thomas, Ashley Rankin and Jillian Betterly is any indication, the final draft will be clear and concise.

For Thomas, one of the founders of the Beti Bike Bash, the country’s largest women’s mountain bike event, change in women’s off-road cycling has come slowly but it has come in spades.

“Aside from all the huge technology changes,” she says, “women’s riding has really taken off these last five years. Groups like the National Interscholastic Cycling Association (NICA) make it easier for young girls to get involved early in life. We can meet each other in so many different settings and events. You can be a recreational rider, a racer or just find mountain biking fun and not call yourself anything. The bikes we ride help make riding a little easier and a lot more responsive and enjoyable. You can find other similar-level riders via social media groups, women’s clinics and events like the Beti Bike Bash. There are less barriers for getting women onto dirt.”

Despite all of this, she adds, some industry folks still aren’t convinced that women ride and have purchasing power.

Ashley Rankin, founder and CEO of SHREDLY Designs, ran into this example of industry ignorance when she was looking for functional and fashionable mountain bike clothing. When she couldn’t find anything that wasn’t blocky or black, she took action, marrying her passion for the sport with her background in marketing and fashion design to create a product that met her needs. SHREDLY’s success indicates that she wasn’t the only one frustrated with her options.

“If you don’t like something or feel it’s lacking, you probably aren’t alone” Rankin says. “I couldn’t find the apparel that I wanted to wear when riding so I made my own, and now it is available to other women too. I didn’t have any connections to the industry when SHREDLY started and the fact that we’re still here, and growing, five years later is indicative of the reception by the off-road cycling world. I would be lying if I said it wasn’t something that I was frustrated by that inspired me to start the brand.”

Jillian Betterly, co-founder of Front Range Women’s Bikepacking, is another example of someone turning up the volume on off-road cycling’s “experience channel.” The group’s free one-day clinics have evolved into overnight and multi-day trips into the mountains. No experience is necessary to participate; greater inclusivity is one of Betterly’s own hopes for the future of off-road cycling.

These ladies and more will share their stories early in the evening of the event, but the bulk of conversation will occur with WÖRCC participants in small break-out groups. Slater’s decision to structure congress like this reflects her vision of offering pertinent, meaningful information to an industry that needs more than facts and figures in order to evolve.

“WÖRCC’s goal is to synthesize the qualitative feedback of 100 women into tangible actionables,” Slater says. “For example, we’re not going to come out of this event saying, ‘Bike shop service departments need to make women feel more welcome.’ We’re aiming to take it to the next level and say, ‘Bike shop service departments can improve performance by taking the three following actions…’ The outcome will be two-fold: results oriented recommendations to the industry, as well as the footprint of an event that can scale in other parts of the country.”

If a congressional hearing is the principal formal method in which committees collect and analyze information in the early stages of legislative policymaking, then WÖRCC aims to position women at the forefront of industry improvement. Because, as much as current affairs try to make it seem so, jumping up and down and pouting like a six year old is not an effective way to enact change and progress. The Women’s Off-Road Cycling Congress just might be.