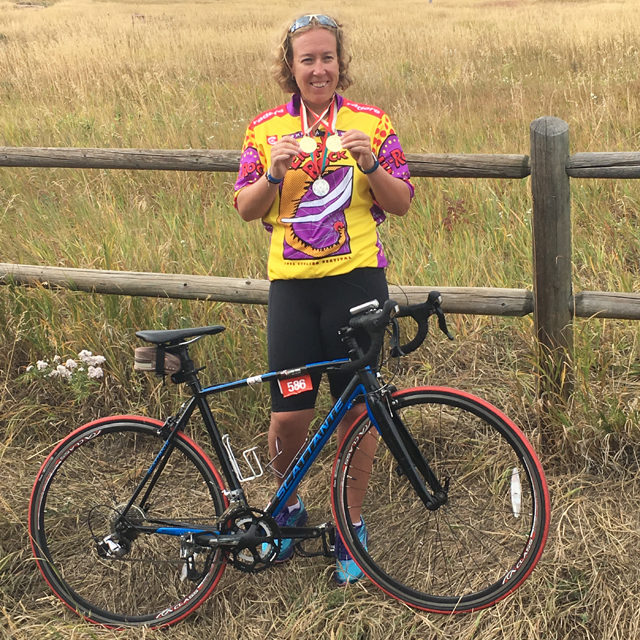 Every morning, Amanda Bammann wakes up in South Boulder, cleans her place, works on the computer for a little bit and then starts training. She’ll run, bike, hike on the trails around NCAR and powerlift at the East Boulder Rec Center. Three afternoons a week she works at the Arapahoe YWCA with the after-school program, the other days she attends nutrition classes at the community college in Westminster.

And all of this training has paid off. In October, Amanda was inducted into the Special Olympics Colorado Hall of Fame as the Female Athlete of the Year.

Diagnosed with Significant Learning Intellectual Capacity (SLIC) at a young age, Amanda is limited in her intellectual functioning and conceptual, social and practical skills. But she’s always excelled at athletics. “I’ve been running since I was born,” Amanda says.

She got her start with the Y riders, a progressive cycling program offered by the YMCA of Boulder County. Then as a teenager she started participating in different sporting events with Special Olympics Colorado, beginning with gymnastics and then progressing to a variety of other sports, including track and field, powerlifting and snowboarding. Special Olympics not only gave Amanda a physical outlet, but it increased her confidence, social skills and gave her a group of friends.

“It’s a good community. It keeps me out of the house for a couple hours and it’s fun,” Amanda says. “I meet people.”

“Special Olympics gave her the basis, the, ‘It’s OK, I can try this in a safe environment,’” says her mom Colleen. “And then once she started doing that, she developed more of her own skills and really got going.”

In the last decade, Amanda has run two marathons, 14 half-marathons and dozens of other race distances and events, including both the Boulder and Longmont Triathlons. She first ran the BolderBOULDER at age 17, and has competed pretty much every year since, competing in the C class last year. And she’s currently training for her first half-IRONMAN in Boulder in June.

Although Amanda competed in at least one sport almost every weekend for a couple of years, she says that lifestyle was unhealthy, and she now plans on participating in events only every other month or so. And after a bout with pneumonia and an extended hospital stay a few years ago, she now needs an inhaler during her long distance runs. But nothing has slowed her down.

“Her work ethic is unbelievable,” adds Jan Radnoti with Special Olympics Colorado. “That says something. The determination, my gosh, she runs circles around me. She kinda makes us all feel like couch potatoes.”

Part of the largest sporting organization in the world, Special Olympics Colorado is a year-round, free of charge sports program for people with intellectual disabilities. The nonprofit serves up to 21,650 athletes through the 20 sports programs they offer each year.

“Sportsmanship is paramount,” Radnoti says. “It’s more about competing in a healthy environment rather than a cutthroat college or professional [one].”

And that’s why the organization honored Amanda as the 2016 Female Athlete of the Year.

“She exemplifies all the qualities of an athlete, as far as team spirit, sportsmanship is a big piece of it, being a role model for other athletes saying, ‘If I can do it, you can do it,’” Padnoti says. “[She has a] can-do attitude, and never gives up. It doesn’t mean she always wins, but she’s never given up. She exemplifies that spirit of sport.”

This also led Amanda to be chosen as a torch bearer both for the annual Colorado Law Enforcement Torch Run (LETR) last May and for the LETR Flame of Hope Torch Run to kick off the Special Olympics World Winter Games in Austria in March 2017. She was selected as one of 10 athletes worldwide to carry the Olympic Torch on a tour through the country, while sharing her story through public speaking engagements. Although the public speaking makes Amanda nervous, her mom sees how much she’s grown through these opportunities.

In addition to her commitments with Special Olympics, Amanda is planning on competing in several races and non-competitive events this spring while preparing for the IRONMAN competition. She also plans to continue Special Olympics gymnastics competitions and snowboard with her sister in Breckenridge. Nothing seems to stop Amanda.

“After I [exercise], I feel better. I’m not as stressed. But I think about sleep,” she jokes.

This story has been corrected with the correct spelling of Amanda’s last name. We apologize for any inconvenience.