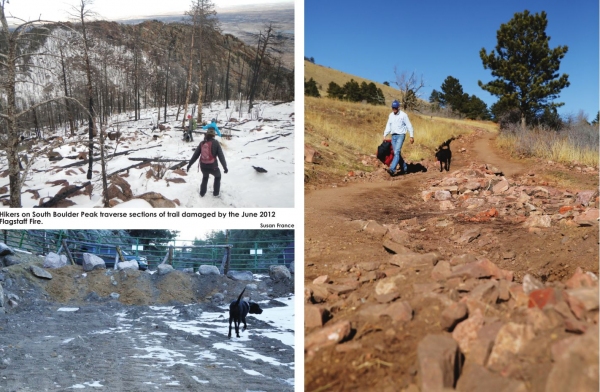 Deep in Shadow Canyon, en route to South Boulder Peak, there is modest evidence of the monstrous floods that ravaged the Front Range. The humble creek that dribbles beside the trail has routed itself around the collection of stray boulders and fibrous tree debris. Exposed roots along the footpath float above the ground where earthen steps have dissolved. Disguised in winter’s rugged palette, Mother Nature’s redesign is barely noticeable. It is only when reaching the apex of the trail that the scenery takes a drastic turn. Just before intersecting with the ridge connecting Bear and South Boulder Peaks, a ghostly forest of gnarled, charred trees stands lifelessly against the open sky. This spooky graveyard is courtesy of the Flagstaff Fire in June 2012, an event that closed access to this high ridge for a full year. After opening in June 2013 for all of four months, Shadow Canyon was again closed due to the floods and only recently reopened.

Boulder’s trails are one of the city’s finest assets. It has been a rough few years in the foothills as fires singed several popular paths and nearly all trails were affected to some degree by the September floods. Volunteer groups and Open Space and Mountain Park (OSMP) workers have been diligently restoring trails, and as of early January, 95 percent of OSMP’s trails have reopened.

A handful of the hardest-hit sections remain closed as OSMP staff works on plans to revive the damaged trails. The popular Royal Arch Trail was fundamentally destroyed, though the famous natural stone arch at its southern terminus was undamaged. Plans are in the works to have a new trail routed in the spring. Upper Saddle Rock trail near Chautauqua Park has been chewed apart by a torrent of floodwater carrying trees and boulders, destroying the well-maintained stone stairways and depositing a 12-foot wall of debris along the trail.

However, closures are the exception to the rule. Hundreds of volunteers from Boulder and beyond have diligently worked to patch up trails.

Several groups, including the Boulder Mountain Bike Alliance, the United Way, Active Boulder and Boulder Trail Volunteers have stepped up and organized restoration projects. The Fund to Restore Colorado’s Trails, Waterways and Parks, a nonprofit organization created by Active Boulder, recently announced $75,000 in funding, available in grants of up to $5,000, to restore Front Range outdoor recreation infrastructure.

“Outdoor recreation drives Colorado’s quality of life and our local economies,” Kim Coupounas, Active Boulder member and co-founder of Boulder-based GoLite, said in a press release. “We will not fully recover until our parks and trails are back up and running.”

Open Space and Mountain Parks took the brunt of the financial damage for the city of Boulder, with FEMA estimates placing the overall cost at roughly $17.67 million. In total, 93 miles of trails (of the 145 total miles in the OSMP system) endured significant to severe damage. Those estimates are not only for direct trail repairs, but they also reflect damage to access roads and facilities. Some of the expense has been offset by the enthusiastic response from the community.

“Overall, Boulder County staff and volunteers have done an excellent job getting trails open as quickly as they could,” says Andy Tyler, trails supervisor for Boulder County

Parks and Open Space. “From here, we are looking more in depth to larger scale projects for the heavily impacted trails and hope to have them opened later this year. Walden Ponds is one area heavily impacted that will require a long-term strategy.”

Beyond the repairs on established trails, volunteers have been quietly rebuilding climbers’ access trails to popular areas, especially in hard-hit Boulder canyon. Most of the damaged trails in these areas are not formally maintained, and many were totally destroyed by rushing runoff.

“It’s been good to see so many climbers taking the time to help rebuild and clean up trails,” says local rock climber Paul Lenhart. “And it’s not just on the ground. A lot of climbing routes have been changed from the flood waters. For example, trees that served as anchors have been uprooted. The climbing community is working on making these areas safe again. People are helping one another out so we get back out there.”

Given how vital Boulder’s trails are for the physical and mental well-being of its people, it shouldn’t come as a surprise that restoring wilderness access would be a high priority. When spring rolls around, there will be continued opportunities to help out, both locally and in the neighboring communities of Lyons and Jamestown.