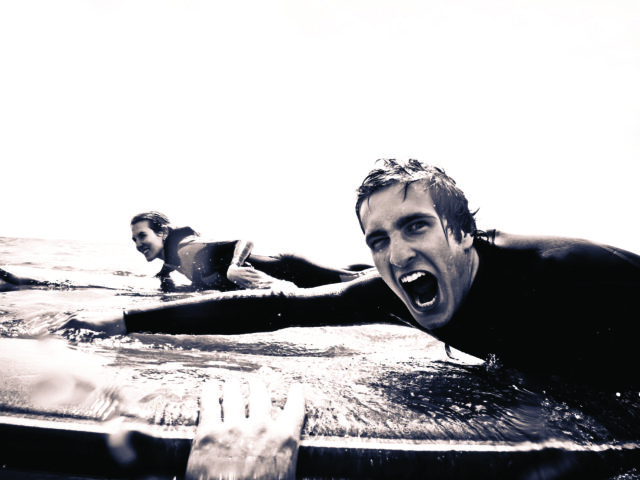 It was Amy Mossberg’s first solo trip in nearly five years. Her anxiety was nearly overwhelming, but she felt ready for this journey. Tears in her eyes on the plane, she left Golden, Colorado, for the Outer Banks of North Carolina on a Sunday, off to spend a week with 13 complete strangers with whom she shared a particular experience: they were all young adults who either have, or recently had, cancer.

“They diagnosed me on June 21,” Mossberg says. “It’s taken me this long to even find the strength to get out and try and be a part of this community. I’m finally at the point where I want to share.”

In a shaky start to a momentous undertaking, her luggage didn’t arrive at the airport. Instead of easing into introductions with the group, arriving from all points on the map, Mossberg focused on tracking down her bags — they wouldn’t arrive until the next night — and stocking up on essential travel items. Later that night, finally settling into the lavish seaside home that would be the group’s basecamp, she could take in what she’d embarked upon. This was no ordinary trip to the coast. This was a surfing camp with First Descents, a Denver-based nonprofit that brings young adults impacted by cancer on outdoor adventure programs, helping them build the lasting support many of them don’t even know they need.

It starts with getting a unique nickname — no First Descents nickname is ever repeated. That first night, the group asked Mossberg what she likes to do.

“I said, ‘Well, I like to smoke marijuana, being from Colorado,’” she says with a laugh. She also used to manage a dispensary, plus she’s a medical cannabis patient, she told them. “So they’re like, ‘Oh yeah. Your name is definitely Doobie.’” Thus Mossberg joined the more than 3,000 young adults already in the First Descents community, and the more than 500 new participants who’ll experience First Descents in 2016 — and she’s the only Doobie.

From kayaking to climbing to surfing, every First Descents trip shares the same purpose: to use challenging outdoor experiences as a vehicle to show young adults impacted by cancer just what epic, extraordinary things they’re capable of.

“We’re not a therapy group, we’re not a support group,” says Sarah Hubbard, First Descents director of marketing and “Camp Mom” on the Outer Banks trip (all First Descents staffers go out on at least one trip per year). “We don’t do any forced conversation whatsoever. That’s kind of what sets us apart.”

Instead, the outdoor adventure component guides each trip, and the bonding over shared cancer experience happens organically.

First Descents sends around 15 participants on each of its 40 week-long trips each year, each one totally for free — the average $1,700 cost per person is covered through First Descents’ funders. Through its group adventures, the organization helps tackle not just the sense of physical limitation, but perhaps more importantly, the psycho-social challenges most of the participants face: anxiety/depression, isolation/alienation, body image issues or low self-compassion.

Think of it as a mental health organization wrapped inside an outdoor adventure organization, specializing in those dealing, in some way, with cancer.

“When you put the participants all together, they’re so eager to just have someone who speaks the same language,” Hubbard says. “They’re making chemo jokes, or they’re talking about their bald heads and their wigs. It’s like they’ve found their tribe, shockingly fast sometimes.”

And a research partnership with the University of Michigan shows that while 17 percent of First Descent participants come into their trip clinically depressed, only 7 percent leave as such.

Mossberg and her roommate, “Bling,” were friends from the first night.

“We didn’t even find out what we had until the next afternoon,” Mossberg says. “It was like, ‘So, what do you have for your cancer? I told her I had a brain tumor… and she had a freaking brain tumor too.”

Doobie and Bling were the only two on the trip with tumors in their brains. Even so, the entire group — 12 women and two men, all between 18 and 39, First Descents’ target age range — stuck together as a unit. On the last day, the First Descent trip leaders said it was the first time they’d seen such a solid group bond.

There was one way Mossberg felt a bit like an outsider.

“I’ve still got the dick in my head,” she says using the colorful name she and her friends have given her tumor, a diffuse intrinsic pontine glioma (DIPG), about four inches wide and two inches across. DIPG is a highly aggressive, difficult to treat cancer that grows on the pons — the part of the brainstem that controls vital functions like breathing, blood pressure and heart rate. The vast majority of DIPG diagnoses are children, and the bulk of the rest are people over 65. Now 31, Mossberg falls into a tiny fraction of people diagnosed in their 20s. She was the only one on the surfing trip who hasn’t undergone surgery or otherwise had the cancer removed from her body.

“They were all talking about how their lives are going being in remission,” she says. “I’m kind of in remission, but I’m not.”

But the deep bonds of common experience were stronger than Mossberg’s niggling sense of other-ness. One major thing they all had in common, she says, was being “that cancer person” at home — something the First Descents staff hear time and again from participants.

“It’s been hard to come back from such a positive experience to a reality where I’m known as Amy the cancer girl,” she says. “Um, it’s actually just Amy.”

First Descents has an answer to the stress that Mossberg and other participants can experience on the post-trip return to reality: Tributaries, or FDtribs. Mossberg has already signed up to be a member of the local Trib, and stay connected with the First Descents culture and community in Colorado.

“We’re finding that’s been a tremendous source of ongoing peer-to-peer support,” says Ryan O’Donoghue, executive director of First Descents. “We’re finding that people are now just doing things on their own, adopting the ‘Out Living It’ lifestyle, versus relying on the organization to live the life they want to live.”

“Out Living It” is the First Descents motto and mantra. Participants don’t usually have backgrounds in the outdoor activities featured on their trips. They start from scratch — how to get onto a surfboard, in Mossberg’s case — and move all the way to riding waves. Common side-effects of cancer or its treatment — like fatigue, or in Mossberg’s case, a shoulder replacement due to the effects of steroids — are all accounted for, but otherwise participants are treated as physically capable and encouraged to embrace feeling vulnerable in their First Descents adventures. Mossberg’s seminal moment on the trip: paddling herself out — shoulder and all — joining the group after a long hard swim, waiting for a wave, feeling completely at peace.

It’s not as if Doobie lives a closed-off life. She and her main source of support and boyfriend of seven years, Chris Gilbane, spend countless hours hiking, floating on Clear Creek and traveling, and they’re always game for outrageous costumes and adventurous antics. Even her treatment regimen is “adventurous” by some measures, and befitting her nickname: every night she takes Phoenix Tears, a type of edible oil high in cannabidiol — or CBD — one of the components in cannabis found to have antitumor effects in some studies. In Doobie’s case, it’s working.

Five years ago, she was given a short timeline. Her tumor was inoperable. Chemotherapy wasn’t an option. She completed the maximum safe radiation treatment, and Western medicine had nothing more to offer. Since then, she’s relied on nothing but a regimen of CBD oil and vitamins. At her last MRI, her tumor was stable — in some places perhaps even shrinking. She’s outliving it.

But like other FD-ers, Mossberg’s world has been altered by cancer. It’s skewed her sense of what’s possible. In dark moments, she fears starting things in case she can’t finish them. But on her surfboard, “Out Living It,” she saw just what she’s capable of. Hubbard sees this in all First Descents trips.

“I think it really adds up to, ‘Oh, I’m still here, I’m totally capable of doing all the things I thought I was capable of doing. I’m not just the sick person,’” she says.

Mossberg says her favorite word was “eventually.” That was especially the case after her mother passed, also from cancer, when Mossberg was a teenager. “My dad would ask me to take out the trash, and I’d say, ‘I’ll get to it eventually’,” she says.