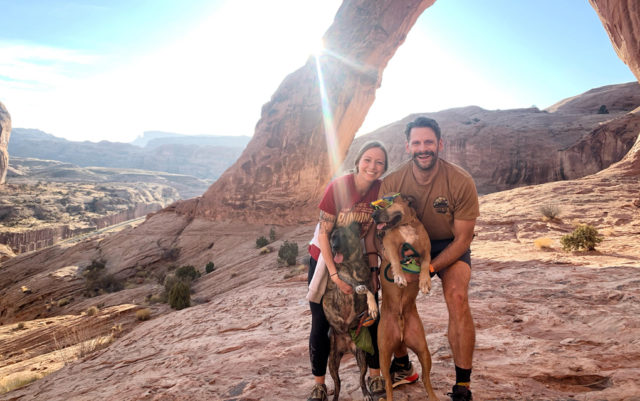 It was during the drive to Moab that Robert Marrow realized he might be making a huge mistake.

Relatively new to trail running, Robert had signed up for the Dead Horse Ultra 50k in October 2019 — his second race of that distance. His first 50k had been in Montana just months prior, and it went well, so he felt ready to tackle another — plus, this one would be at a much lower elevation, so he figured it was well within his reach. Still, he could feel tension building in his chest.

After moving to Colorado from the East Coast, he took up running to help him recover from a skiing injury. He quickly fell in with a group of trail runners, and in the months leading up to the race, he soaked up as much of their advice as he could.

Robert didn’t get a coach, opting instead to use training plans from a few different athletes, all of which had been running for years and had solid, proven routines.

“The weeks leading up to the race, I was pushing myself, adding mileage and weight training,” he says. “I was completely overtrained. I wasn’t listening to my body.”

The morning of the race, everything hurt.

“I was trying to hide the fact that I didn’t feel good. Standing out of bed hurt. Getting off the couch hurt. I didn’t want to admit it. It was fear.”

Robert knew he had the capacity to run 31 miles — after all, he’d done it before. The morning of the race, he toed the line with a friend and they set off together at the sound of the gun. But about 25 minutes in, he told his friend to go ahead.

“I started hitting mental walls. After mile three, it was just regret after regret. I was in a dark place.”

There were some added pressures, Robert admits. His girlfriend was there, his parents had come out, and he felt he had to finish — partly for them.

The scenery kept him going for another 18 miles, but he felt more and more miserable with every step.

Robert pulled out at mile 21.

“It was the first time I’d failed in running. It was something I’d become pretty cocky about.”

After the race, he thought about selling all his running gear.

“I felt I’d ruined it for myself. I kept looking back at everything I’d done wrong,” he says. “I punished myself.”

Boulder acupuncturist Ginna Ellis says what happened to Robert is a common phenomenon, heavily influenced by the mega-athletic culture of Boulder.

“You go to a party and everyone there has run a 100-mile race or has done an Ironman, and they do these things casually, so it becomes no big deal,” she explains. “People can make reckless decisions because it’s the norm here.”

Ellis often sees clients fall victim to the “perspective problem,” signing up for a 50- or 100-mile race before they’re ready, and dealing with devastating consequences once it’s over.

“A 100-mile race takes such a toll that it can deplete you in ways that you don’t realize until months afterwards.”

She says overtraining manifests as deep fatigue, with people feeling like they may need to sleep 12 hours every night. Or, mild injuries might take much longer than usual to heal.

“There’s a deeper level of depletion that might not rear its head right away,” Ellis says.

Dr. Marek Dvorak is a psychologist in Boulder — he’s seen burnout fatigue often since moving to the area a few years ago.

“The Boulder athlete is very performance-oriented. They tend to have very high standards for themselves and tend to be very harsh on themselves should they not meet those standards,”  Dvorak says. “When an athlete doesn’t meet those standards, often this affects their daily functioning, or their mood. They get very discouraged, show signs of depression, frustration or anger.”

Dvorak echoed that it’s a perspective problem; being surrounded by such a high level of athleticism can be inspiring on one hand, but more often than not it can lead a budding athlete to believe they’re ready for huge undertakings.

“I think it can be dangerous for someone who comes to Boulder and is less experienced, or who has unrealistic expectations,” he explains. “If you were once a big-time woman or guy in Podunk, USA, and then you come to Boulder, all of a sudden you don’t stand out. You may not garner that same attention and admiration from other people, and that may be difficult to take.”

And then there’s social media.

Strava is a fitness app in which users can publicly log their activities; whether they’re running, cycling or swimming. It gives athletes an opportunity to share their results, and often can turn into a highly competitive virtual race.

Robert says his burnout started when he started using Strava. He got sucked into the competitive aspect of the app, always checking how his runs stacked up to the athletes he followed.

“I was comparing myself to people who had been in the sport far longer than me, and who have coaches and dieticians. Essentially, people who know their body and what it can handle. And here I am, 16 months into running, trying to emulate these pro-athletes.”

Often, Dvorak sees athletes conflating identity and results, explaining that when self-identity and notions of self-worth are attached to performance, there are dire consequences. That’s where perspective comes into play: honest self-appraisal and realistic expectations are vital for the hobby or recreational athlete.

However, self-appraisal can be very off sometimes, Dvorak says.

Robert admits his perspective was a little warped by what he was seeing on his trail runs.

“You go out intending to do a small run, like the Sanitas Loop, but in that time you might pass two or three pro-athletes. I’d be looking at them, and thinking, I’m going to catch them — even if that wasn’t the workout I’d planned for myself,” Robert says. “I was just trying to compete.”

Ellis, who has often seen the physical impacts of overtraining as an acupuncturist, says it’s a downward spiral that can sink an athlete quickly.

“Overtraining can have these devastating effects. By the time you realize what’s going on, it’s often too late. They think they’re doing everything right and then all of a sudden, they can’t get off the couch for three months.”

When a person trains hard, the impacts aren’t solely physical. Your body doesn’t differentiate between your training load as a stressor, versus your emotional or work stress, she explains. It’s all the same to your body, and can present itself in a number of ways; fatigue, loss of motivation, irritability and sleep loss are all classic signs. And, it’s a moving target — what’s possible for some athletes can be way too much for others.

“Boulder is full of passionate, highly motivated people, which inspires people to do things they wouldn’t normally think possible,” she says. “I don’t see Boulder as being a hotbed of toxic competitive energy, but it’s a bubble in so many ways — one of them being that everyone is a super athlete, and so you kind of lose perspective.”

Robert’s devastating 50k shook him up — in a good way. It was clear to him that he’d pushed too hard leading up to the Moab race, compromising his mental and physical state to the point at which he hit a wall, head-on.

He took some time off after the race and focused on himself, his relationship and his dogs.

It was the community that brought him back.

Despite all he’d been through with the Moab 50k, Robert has already signed up for two 100-mile races this year: the Leadville Ultra and Bryce Canyon Ultra.

He still has a couple months to change his mind, but says he’s “dangling the carrot.”

However, he’s doing things differently this time: he changed up his training routine, has a friend coaching him, and is focusing on listening to his body more. Social media is now where he goes for injury prevention advice; Strava is now serving as his own personal metric, rather than a source of competitive energy.

“I’m feeling strong and positive recently. I don’t want to burn out again. I want to stay happy and love this sport.”