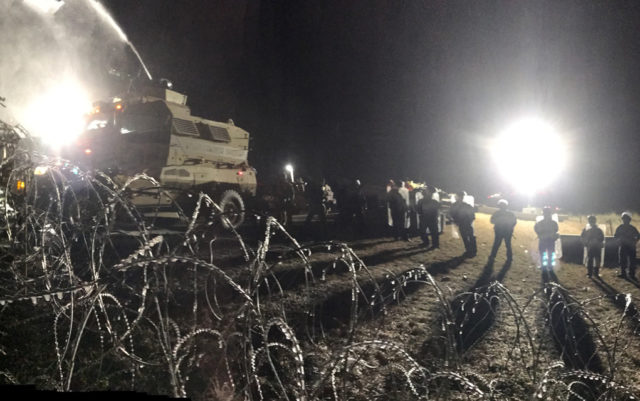 As resistance to the Dakota Access Pipeline (DAPL) in North Dakota has grown throughout the year, Scott Mackenzie-Low felt the personal call to join the protest growing too loud to ignore. An activist, artist and avid cyclist (and seasoned pedicab driver) who once biked from Colorado to Canada, Mackenzie-Low decided to join the DAPL protests by riding his bike from Denver, Colorado, to Cannon Ball, North Dakota. The message he would send out to the world from the anti-DAPL camps on and near the Standing Rock Reservation would be simple:

“If I can ride my bike to Standing Rock, you can ride your bike to the grocery store,” he says.

This would be no afternoon ride for charity; this is a more than 700-mile journey to support a movement. Mackenzie-Low would pedal to the heart of the pipeline resistance, which has grown from just a few tents this past April to an international gathering of thousands, to show that there are alternatives to our fossil-fuel-driven lifestyle — and that it’s worth thinking twice before filling up the gas tank, especially if society’s desire for more and more oil puts tribal lands and indigenous people in serious danger.

If completed, the controversial DAPL would weave more than 1,100 total miles through four states, transporting up to 570,000 barrels of crude oil per day from the Bakken oil fields of North Dakota to a storage facility at a river port in Illinois. Where a short section of it winds under the Missouri River north of Cannon Ball, DAPL would threaten the Standing Rock Sioux Tribe perhaps more than anyone else along the pipeline’s path, passing under the tribe’s sole water supply and putting it at risk of contamination.

So on Oct. 10 — Indigenous Peoples’ Day, otherwise and less progressively known as Columbus Day — Mackenzie-Low symbolically began his cycling journey, with a wheeled trailer in tow. He started by heading south to Manitou Springs, where he collected mineral water from the sacred springs to offer to the elders at Standing Rock, before pedaling back up north through Denver, Greeley and other Colorado towns. Mackenzie-Low stayed and dined with friends — he only had to sleep on the side of the road once in Colorado, he says. Pushing north into Wyoming, he spent a memorable night at a rest stop, sleeping on the floor in an out-of-service bathroom. A few nights later in Nebraska, one of his trailer tires went flat just as a heavy rain began to fall, and he hunkered down in a fast-food restaurant until it closed. Eventually he managed to find safe overnight shelter from the rain against the side of a church. Further north on his journey, after three more flat tires and several breakdowns, Mackenzie-Low’s mom bought him a hotel room for a night to boost his flagging spirits.

Up through Nebraska and into South Dakota, town names get hazy in his memory. There was Scottsbluff and Chadron; Rapid City, New Underwood and Union Center; and finally, the crossing into North Dakota. The ride was longer and more difficult than he’d bargained for. “I thought I’d be going basically downhill all the way to Cannon Ball,” he says. “But there were ups and downs. I was facing a headwind most of the time, and if it wasn’t in my face, it was blowing at my side trying to tip me over.”

But at long last and after nearly three weeks of pedaling, he arrived at Standing Rock and set up camp. The next morning, a bongo drum strapped to his handlebars, he rode up to the front lines of the protest action that was starting and began drumming. That was nearly one month ago. Mackenzie-Low originally planned to stay just a week or two, but he’s still at camp, still actively supporting the protest movement daily.

“I’ve decided to leave my comfort zone,” he says. “The indigenous people, they need people to stand with them and make sure their rights are protected. I felt a lot of compassion for what they’re going through. And compassion can be through action.”

Mackenzie-Low has taken film and photographs every day along his journey. He now spends a lot of time up on what protesters call “Facebook Hill” in the Oceti Sakowin Camp, he says. From the hill, he’s sharing the story of his journey through film and photos, and promoting different forms of activism to support the DAPL protest efforts.

“That’s also where we all go to tell our families we’re not dead or arrested,” he adds.

It’s far from clear what the DAPL outcome will be, how successful the anti-DAPL movement or the accompanying federal lawsuits will be — and now, he says, “things are getting crazy down here.” One night last week, he says, “the cops were hosing us down in freezing temperatures, shooting rubber bullets at unarmed protesters, and throwing flash bangs,” despite protestors remaining non-aggressive.

And at the very least, a quick perusal of his Facebook page suggests at least one friend back home has decided to ride his bike to the grocery store.