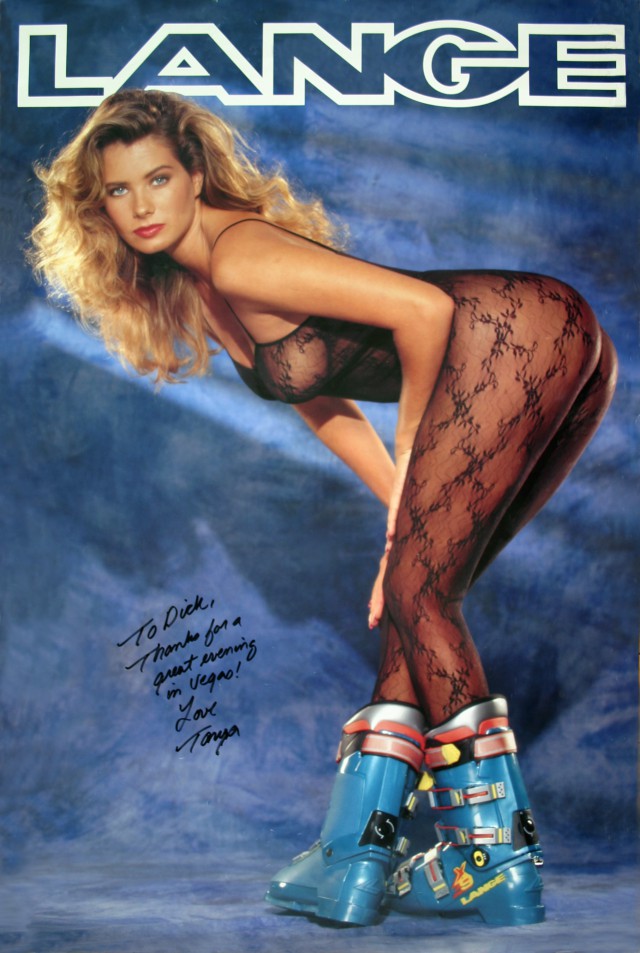 The Lange Legacy: Innovative boot design and innovative advertising were the hallmarks of this former Boulder company.

When Bob Lange developed the plastic ski boot in 1962, he started a revolution in ski boot design. But that wasn’t the only revolution that Lange started. Eight years later, in 1970, the first Lange Girl poster appeared with the moniker “Soft Inside.” The poster would be the beginning of a seemingly endless line of sexy women wearing pretty much nothing but Lange ski boots.

Of course, this is a tradition that has been copied by many others. Nordica came up with its own harem of “Nordica Girls.” The defunct Hanson boot company used to rely on sexy models to help sell its brand, and the North American distributor of Stockli skis also ran a bizarre ad for several years featuring a strange reliance on a blonde model posing with the company’s product, an ad that had nothing to do with skiing and wasn’t even sexy. A marketing and creative disaster, it’s probably one reason that the company’s skis remain virtually unknown here.

And while Hanson can lay claim to being an innovator — the company introduced the first rear-entry ski boot — the lack of performance and fit that Hanson boots offered couldn’t be corrected by a few girls in thongs prancing around in Hanson boots.

But Lange, who based his manufacturing facility outside of Boulder, northeast of where Flatiron Crossing currently resides, was on to something. Not only did his boots work better than anything else on the market, but the design that Bob Lange developed remains the foundation for the modern ski boot.

The next time you are in Vail, take a moment to stop into the Colorado Ski Museum based in the main parking structure and look at some old Lange boots. The overlap design isn’t really that much different than what the company, now based in Italy, has on tap this year.

Lange boots work. In fact, they work so well that they’re the overwhelming choice of World Cup
ski racers. The brand has more victories and athletes on the circuit
than any other boot manufacturer, and if you’re a betting type, you
could do a lot worse than bet on Lange boots being on the podium more
than any other product at this year’s Winter Olympics in Vancouver,
Canada.

Still,
what’s function without fashion? And what’s fashion without sex appeal?
Always the innovator, Bob Lange understood this, and thus the Lange
Girl was born.

“The
Lange Girls were always beautiful, and some of them could ski, although
they did so barely clothed,” says Richard Allen of Vintage Ski World,
an Aspen-based shop that is one of the only places in the world that
you can find old Lange Girl posters. (Allen sells the posters along
with a wide variety of other historic and collectible ski memorabilia).

That’s a point well-taken, considering that in 1992 Pamela Anderson posed as a Lange Girl.

Pamela Anderson toughing out an Eldora blizzard while ripping up Corona Bowl? Not likely.

While
Anderson has moved on to bigger and better things, Lange still produces
an annual Lange Girl poster and distributes them directly to ski shops
across the country. If you want one, all you have to do is get a job in
a shop that supports the brand.

And
the posters have changed. In a nod to the fact that you can be both
sexy and a world-class athlete, Lange now taps into its pool of
sponsored skiers, producing pin-ups featuring the best in the world.
Lindsey Vonn, a Vail resident, World Cup overall champion and one of
the best American skiers to ever strap on some boards, recently graced
one of the latest iterations of a Lange Girl poster.

Keep
an eye on Vonn. She’s beautiful and fast and will probably look even
more stunning with a couple of Olympic golds hanging around her neck.
Once that happens, expect another batch of Lange Girl posters featuring
Vonn to come rolling off of the presses.

But
if you want a slice of Lange history and must have a classic Lange Girl
poster for your den, you’ll have to look hard. Many of them are
unavailable, and the ones that are can cost upwards of $300.

Lange’s
fractious history and relocation to Montebelluna, Italy, from the
company’s early headquarters in Boulder County resulted in the loss of
the brand’s archives, which included many classic Lange Girl posters.
Happily for us, though, a few do remain. Vintage Ski World
(vintageskiworld.com) still has a few they can sell you. And with Vonn
poised to make ski-racing history, maybe it’s time to forget about
models who can’t ski and celebrate female athletes who can model while
also dominating the competition.

As Bob Lange knew: Sex sells, but only if you have the performance to back it up.