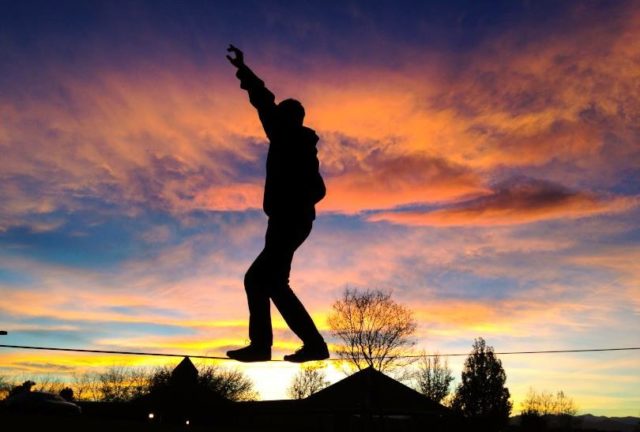 On a clear, quiet day in July 2015, a group of University of Colorado Boulder students tightened a length of flat webbing between two trees and above the weathered grass. That day Martin Park, a greenspace in South Boulder they often frequented, was surprisingly empty, creating the perfect slacklining conditions.

Tyler Shalvarjian, then a junior at CU Boulder, stepped onto the slackline and walked across the tightrope-like set up. The balancing act came easy for him — a product of years of practice. The group took turns walking back and forth along the line, performing tricks like changing directions and jumping on and off the webbing, cheering each other on and lounging in the sun. Mid-balancing act, an officer appeared and demanded the slackline be removed, evoking Boulder’s City Code 6-6-6(c), which prohibits attachments or installations on any city-owned tree.

Shalvarjian stood up and took the blame, along with the $250 citation.

“That’s when I jumped into the legalization process,” Shalvarjian says. “I spent the last two years chatting with city officials, going back and forth analyzing parks and trees to see [which could best] support slacklining.”

Shalvarjian joined an initiative already gathering steam. As early as 2012, Ken Wagers, a slackliner since the ’80s, had helped start the conversation with government officials. To him, it didn’t seem fair to punish someone, especially kids, for being outdoors, active and social, especially when they were just as concerned with keeping trees and people safe. Wagers’ son, Justin, now a professional slackliner, has traveled around the world competing, and often placing, at Slackline World Cup events. He was with Shalvarjian the day he received the ticket.

“Last year we finally pulled together all the right people,” Wagers says. “We sat down with the [City’s] chief forester, Jeff Haley, their legal staff, and we talked. They were really open to what we had to say.”

Jeff Haley, Boulder Parks and Recreation planning, design and community engagement manager, says slacklining itself was never outright illegal. “It basically got lumped into this general rule meant to protect trees — what we consider our urban forest. Over the years, as slacklining became more popular and prevalent, some citations were indeed given simply because the rules inherently included slacklining.”

Slacklining has been a part of Boulder’s diverse recreational scene since the 1940s. Even the sports pioneers, who were among the first slackliners in the country, could never resist taking advantage of the city’s abundant green spaces, despite the known rules which had been put in place to prevent horses from being tied to trees. Yet for a long time, the relatively small numbers of dedicated slackliners kept the threat of abrasive webbing damaging tree bark fairly low. That held true until the past decade or so, when the sport garnered more mainstream popularity thanks in part to the rise of adventure companies, organizations and sponsorships like Red Bull and the X Games.

Starting in the late 2000s, slacklines began popping up between Boulder’s trees before the City could reconsider or adapt its policies. As though overnight, it seemed slacklining — an invigorating after-school activity, cheap social hang out or portable adventure — was everywhere.

In 2008, Slackline Industries set up its headquarters in Boulder and began selling some of the first high-quality slackline rigs in the country. But in 2013, they left town.

“[It was] like starting a brewery in the 1930s or being a Cuban travel agent,” Ricardo Bottome, Slackline Industry’s CEO, told the Outdoor Industry Association.

“It was unbelievable,” says Brad Schneider, a sales manager for the company. “We started hearing from students and our customers they were being told to take slacklines down. Some were being fined. Close-minded people were pushing down [new cooperation] initiatives on multiple fronts. All because back in the day they didn’t want people to tie their horses to trees.”

In December, after nearly four years away, the company relocated back to Boulder once they heard the policy shift was imminent. “We couldn’t be happier about our return to our roots in Boulder,” Bottome said. “All [of a] sudden you’re not such an outlaw.”

Early last year, a coalition of slackliners, including Shalvarjian and Wagers, presented a policy draft to the City. They used examples from places that do allow slacklining, like Jackson Hole, Wyoming, and CU Boulder (which sanctioned slacklining on campus three years ago) so as to model successful and safe slacklining scenarios.

When it came time for the City to make a decision, Haley says, “It was a great process. We involved several people from the community, our risk management team, maintenance people, our law officers… It was a very positive, very collaborative process. We used a lot of the same language as [CU Boulder’s campus], looking for consistency throughout the city.”

The new ruling outlines eight parks approved for slacklining — Howard Heuston, North Boulder, Martin, Bear Creek, Beach, Scott Carpenter, Admiral Arleigh A. Burke and Melody Park — along with an interactive map identifying which trees are permissible to use. It also mandates how to properly protect trees with carpet squares or cloth pads, how high the lines are allowed to extend off the ground (four feet at the midpoint) and other measures to protect participants and spectators.

“I’m pretty satisfied with the results,” Shalvarjian says, though he’s also expressed concern about the stipulations preventing more advanced slacklining practice. “There’s a lot of room left for negotiation, so I almost see this as a trial period. There’s lots of flexibility where the rules stand. We can work with the City forester to take out [designated] trees and suggest new ones, [depending on] how things go. The City was super cooperative and we’re really thankful.”

And leaving room for future adaptations was key in helping the slacklining community self-police. “I know they don’t want to push their luck, so we’re counting on them to help us out,” Haley says.

At the end of the day, the new slacklining policy fosters community as well as the expansion of the sport in Boulder.

“We saw it was an excellent opportunity to engage the youth — teenage to university students who aren’t out on playgrounds but don’t necessarily like team sports,” Haley says. “It’s a healthy sport to get people outside. You don’t need a team, or any really special equipment. It’s social, and builds community.”