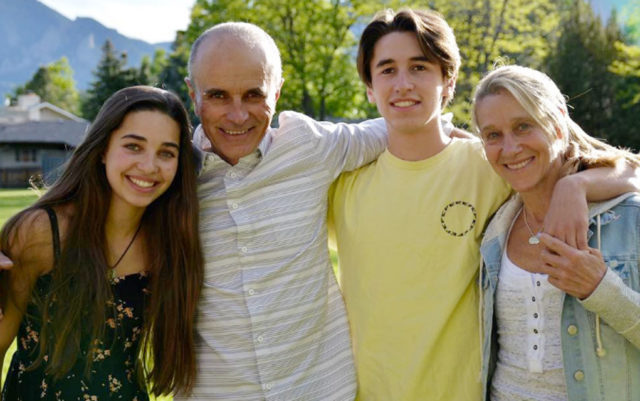 I’ve never even thought about being old,” says Robyn Erbesfield-Raboutou, a former world champion rock climber who, now at age 53, still manages to send 5.14, a level that only the sport’s most elite climbers ever reach.

Robyn is the head coach of Boulder’s Team ABC, a youth rock climbing team that won the 2016 Lead Climbing Youth Nationals last month and the Bouldering Youth Nationals earlier this year. Team ABC, which stands for America’s Best Climbers, has been under the headship of Robyn for more than a decade, and now with half a dozen national titles, has confirmed Boulder as host to the best youth climbers in the country.

The fact that Team ABC lives up to its name salutes Robyn’s personal training and competition experience. As a five-time U.S. champion and four-time climbing World Cup winner, Robyn knows how to win.

“I pretty much fell into taking climbing very seriously because I take everything very seriously,” Robyn recalls, harkening back to when she learned to climb while in high school in Georgia. “I’m a diligent person.”

Robyn has coached climbing since 1993, but she doesn’t let that get in the way of her personal climbing. Last summer she finished a 5.14a climb that she’d unsuccessfully tried in the past, when she was “younger and probably fitter.”

“[Now,] either I have a really solid body for my age, or it’s just my mental game [that helped me succeed], which is possible because I’m really strong mentally.”

Her daughter Brooke, who was the youngest American and youngest female to ever climb 5.14, is following her mother’s route without pause. She’s been climbing regularly since she was 4 years old, and by age 11, she’d already set seven records. Now, at age 15, Brooke continues to push the boundaries of rock climbing, both indoors and out.

At nationals this year, Brooke placed second, narrowly behind Ashima Shiraishi, in the lead competition, which involves climbing a gym wall, about 45-feet tall, clipping into all the preplaced quickdraws without falling, as quickly as possible. She also podiumed in speed, where climbers race up a standardized route on a fixed rope, and bouldering. Brooke will represent the U.S. in all three competition climbing disciplines — lead, speed and bouldering — at the International Federation of Sport Climbing’s Youth World Championships in China this November.

Truth is, Brooke’s multifaceted achievements come as no real surprise: Climbing runs deeply throughout the whole Raboutou family. Her father, Didier Raboutou, was a French national champion in the 1980s and ’90s. And her older brother Shawn, who at 18 years old placed ninth in the USA Climbing Men’s Open Nationals tournament earlier this year and just completed two V15’s in South Africa that rank among the hardest boulder problems in the world.

“We were a climbing family from the very beginning,” Robyn says. “I took the kids everywhere with me, climbing-wise. I never left them at home.”

In 1989, at the inaugural Lead World Cup series — a collection of lead climbing tournaments held in numerous locations around the world over the course of a year — Robyn claimed the overall championship title. It was in Europe, during a competition, that she met Didier.

“I would see him [at competitions] and connect with him and the French team,” she says. “They made me a pretty big part of their team when I was training in Europe.”

After a year of traveling and competing together, Didier retired from the competition scene and built them a gym at their home near Toulouse, France. Together they established training camps all over France and soon Robyn, too, retired from competitive climbing.

After getting married and Shawn’s birth, the Raboutous bought a house in Boulder, deciding they’d split their time between France and Colorado. Two years later Brooke was born, completing the climbing family.

“We stopped at two [kids] because when Brooke finished her last series of naps … I was like ‘This is awesome!’ we can go do things all day and we don’t have to go home and take naps!” Robyn says. “I got super lucky that my kids like climbing. I know it can go either way.”

In 2004, the Raboutous founded the ABC program in Boulder. “It’s one reason that [Shawn and Brooke are] climbers,” Robyn says. “I created a brand of climbing and built a whole community of young climbers around them. They grew with my business as little people.”

In juggling duties as head coach and mom, Robyn says, “I’ve found a better balance for working all the time and trying to take care of myself and my family, because you know I also have a full-time family job.”

To help, Robyn looks for ways to get out and move during the day, especially outside, something she believes is vital to the way she connects with people.

“Even when it’s the middle of the winter and I have a meeting with a parent, I’ll ask them if we can walk around. Let’s just move. Because it’s good for them, it brings out the best in them, even if they have something on their chest. By the time that we’ve finished our walk, they feel better about themselves and we’ve had a deeper conversation because we’ve added exercise to it. So a lot of my meetings are walks.

“And it’s good for me because I not only get that meeting in with the parent, but I also get a walk in, and that keeps me sane. When I’ve got 30 kids that are going to rush at me in an hour, sometimes I multitask like that.”

Aside from training Team ABC, the ABC program also caters to young and novice climbers with programs and camps oriented around teaching climbing technique and basic skills. In this case, ABC stands for agility, balance and coordination, and coaches focus on “inspiring confidence and self esteem,” according to their website, “by teaching … the building blocks of all athletics.”

Team ABC members have dominated the climbing scene, not only nationally, but internationally too. Team member Megan Mascarenas just won the Bouldering World Cup title for the second consecutive year, and other members like Brooke and Margo Hayes have been consistent dominating forces at Youth Nationals for years. The team’s sponsors include premier climbing companies Petzl, La Sportiva and Organic, among several others.

“I’ve never pushed climbing on my kids,” Robyn says. “I mean, now that they’re semi-professional athletes I encourage them, but they’re on their own path and they love climbing.

“I don’t know what I did to get so lucky and a lot of people would say, ‘Oh, you’re not giving yourself credit,’ but I do really think I got lucky.”