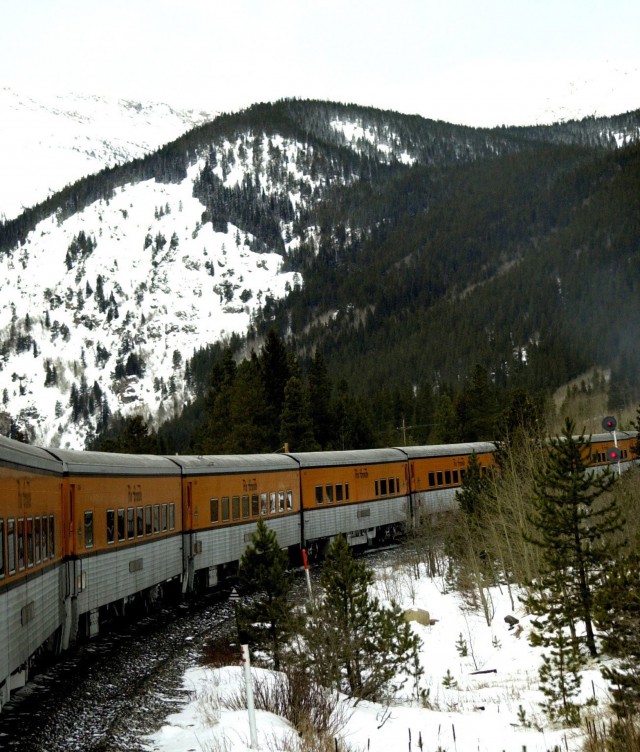 There’s never traffic at this concert venue, and you always
have a designated driver.

At 9,242 feet, seven miles from a public road, the only way
to get here is by train. In building a concert venue high on this pass in
southern Colorado, the Rio Grande Scenic Railway had to haul in everything by
train — including a cement truck. Solar panels and a wind turbine were set up
to provide all the power.

The endeavor reached fruition this summer, with regular
weekend concerts drawing hundreds to a pristine mountain meadow accessible only
by train. The last show of the year was Sept. 19, and the railroad plans more
such events in 2010 and may someday pick up passengers in Pueblo, Colo., or
even Colorado Springs.

Trains have long whisked people through Colorado’s
mountains, from smoke-belching narrow-gauge railroads that opened up the
frontier to the restored locomotives that carry tourists on summer excursions
through the high country.

But, these days, there’s a lot more to do than stare out the
window or sip drinks in the club car. And autumn, when the air is chilly and
it’s already winter on the high peaks, is a great time to do it.

“We’re (Colorado) natives and this is unbelievably gorgeous.
It’s completely untouched. It’s beautiful,” said Pilar Lovate, of Colorado
Springs, riding back to Alamosa after the Rio Grande Scenic Railroad’s last
concert. “We rode the train up to the middle of nowhere. No cars. There were no
power lines.”

The train began operating in 2006, one of nine mountain
tourist trains in Colorado. It has several routes, and passengers can get on in
La Veta, Colo., Alamosa, Colo., and other locations in Colorado’s San Luis
Valley.

A one-time concert in 2007 was so successful railroad
officials added more in 2008. They have a stage this year, and riders can get a
cooked lunch. Next year, railroad President Ed Ellis said he hopes to add
camping to the trip.

“It was clear from the get-go we should do it at the top of
the pass. You can only get there by train,” Ellis said.

The music is “family friendly” and Americana — country, folk,
jazz — and Ellis said that is how it will stay. Many shows, including the final
one, have featured cowboy music performer Michael Martin Murphey. A film crew
from the PBS series “America’s Heartland” came along for a future episode.

The venue is breathtaking, an aspen-ringed meadow, with the
jagged massif of Blanca Peak shining in the distance. And riding through a
rugged Western landscape in a train car, past deer and elk and high mountains,
to get here is an old-fashioned experience. You can talk to the conductors in
their old-time uniforms, get a drink in the club car, travel to a place with no
roads and forget what century you are living in.

“Take a look out there. American flags, beautiful people.
This is just my dream gig,” said Murphey, shortly before taking the stage for a
two-set performance. “What we’re the proudest of is the fact we’ve built it off
the grid up here.”

Later, back onboard the train, Murphey and his band took out
their instruments for an impromptu singalong in the club car. They plucked
songs about trains as the train wound its way out of the mountains, while the
setting sun cast long shadows on the dusty San Luis Valley floor. Ellis, the
company president, played with them.

“Trains and music, they kind of go together,” Ellis said.

Most excursion trains offer splendid views of the changing
aspens and snow-covered peaks, and they run through late October. Some run all
winter.

—The Pikes Peak Cog Railway, which runs to the summit of
Pikes Peak, operates all winter.

For hikers, the train this year began offering one-way
tickets on the first and last trains of the day — excluding Saturdays and
Memorial Day, July 4 and Labor Day weekend — for hikers who want to climb to
the top of the peak and ride down, or vice versa. The tickets were previously
available only on certain days early and late in the season. The Cog has a Web
page devoted to rules about this, on which they repeatedly stress that you
can’t use their parking lot, www.cograilway.com.

The Cog also offers $10 tickets to the mountain-view stop, a
1.5-mile hike from Barr Camp, in the off-season from Labor Day to Memorial Day,
excluding Saturdays.

—The Cripple Creek and Victor Narrow Gauge Railroad,
offering splendid views of the fall colors on the west side of Pikes Peak, runs
through mid-October. Call 689-2640 for schedules.

—Does a woodland concert sound too civilized? Penetrate
deeper into the wilderness onboard the Durango & Silverton Narrow Gauge
Railroad, which provides access to the stunning Weminuche Wilderness.

Hikers can be dropped off and picked up at the Elk Park and
Needleton stops, and a popular 34-mile, multiday backpack loop can be done
between the two.

Visit www.durangotrain.com for details. The train runs
through Oct. 31, and make sure you are at the pickup stop on time, because not
all trains will stop for hikers, and it is many miles to reach the nearest
road.

—The Ski Train runs from Union Station in Denver to Winter
Park from Dec. 26 to March 28. While it shut down this spring after 69 years,
Ellis’ company has received approval from the track owner, Union Pacific
Railroad, to restart it.

—The Royal Gorge Route Railroad, which runs through the
gorge, has Saturday and Sunday afternoon trips through the end of December, as
well as Murder Mystery Trains at night and Santa Express Trains in November and
December. Go to www.royalgorgeroute.com.

—The Rio Grande Scenic Railroad is not holding more concerts
this year, but the train continues to run through the fall and winter.

For information on these and other trains, and an
interactive map, visit the Colorado Tourism Office’s trains Web site,
www.colorado.com/train.aspx.