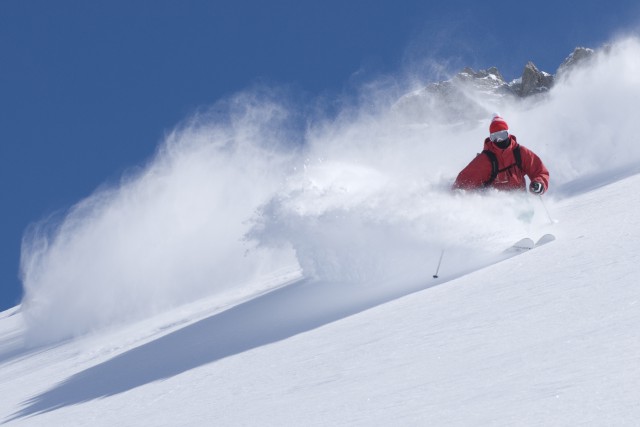 Part-time Boulder resident David Lesh is stoked. He’s skiing in Switzerland, and he’s landed at Vals, in the Graub%uFFFDnden region, with a meter of new snow on the ground and more on the way. He’s plunging through the trees, skiing faster than possible and turning on a dime as lines open and close.

But what makes his smile at the bottom so large isn’t just one of the best days he’s ever experienced in his life, or the fact that an expensive overseas trip is paying off, or even that he can eat Swiss chocolate for breakfast. It’s the skis he happens to be riding. Made by the Avon, Colo., company Liberty, and called the Double Helix, the boards represent the new generation of ski and snowboard technology. Fat, (they clock in at a whopping 121 mm underfoot) yet able to hold an edge on groomed runs, they’re light, nimble and feature what’s become known as “rocker” technology (or in Liberty’s marketing lingo, “Fat Head Technology”) in the tip. And they turn great days into experiences that push the stoke meter deep into the red zone.

By all appearances, rocker seems to be the Holy Grail in skiing and snowboarding technology. The concept has been taken to the extreme, with companies making radically U-shaped skis and boards, which tend to be one-condition wonders: pure powder tools that allow for higher speeds, easier floatation and effortless turns, but which also can be brutally tiring when skied on hard snow, due to the relatively short effective edge. But the subtle use of rocker, like that found in Liberty’s Double Helix and other ski or snowboard models manufactured by local companies, such as the Premier F1-R from Denver-based Never Summer Snowboards, are — as Lesh is discovering — a revelation. Equipment with the right amount of rocker initiates turns easier, blasts through junky snow and breakable crust and allows product designers to create amazingly nimble tools that are versatile enough to hammer the tight trees off of the Pallavicini lift at A-Basin but also are smooth and stable at warp 10 speeds in Vail’s Back Bowls.

It can be argued that the design revolution that led to today’s commercially available rockered skis and snowboards was sparked by a former University of Colorado student, the late Shane McConkey. A talented, creative athlete, McConkey turned pro after his CU days, appearing in movies by Matchstick Productions
and Warren Miller and picking up big-name sponsorships from Red Bull
and K2. But McConkey was also a visionary, always looking for new and
interesting ideas that could make equipment better, because better
equipment made skiing easier, and easier was more fun. His first
commercially available design, the radical reverse sidecut (the tip and
tail of the ski was narrower than the waist, the opposite of
traditional ski designs), debuted for now-defunct Colorado-based
manufacturer Volant as the Spatula in 2002. The Spatula also featured
rocker in the tip and tail. With McConkey the highly visible
spokesperson for the new concept, expert skiers quickly realized that
the Spatula was a new kind of powder ski, one that made skiing soft
snow ridiculously easy. When Volant folded and McConkey was picked up
by K2, he brought the concept with him, resulting in the K2 Pontoon
that debuted in 2006: a pure powder tool that — due to the strength of
the K2 brand — made the competition sit up and take notice.

As
other manufacturers started to tinker with similar designs, product
developers discovered that rocker, when combined with a traditional
footprint (wider at the tip and tail than underfoot), created amazingly
versatile tools, skis and snowboards ideal for experts, with enough of
a “sweet spot” that they could help lowerlevel participants break out
of the intermediate rut and tackle powder and difficult snow conditions
with ease.

Rocker
“opens up the mountain, as far as places you can ride,” says Never
Summer’s Vince Sanders. “There’s less drag on flatter terrain, you can
ride lower-angle powder, catwalks are a lot easier, and you conserve a
lot of energy.” Sanders says that snowboards with rocker are also “less
likely to catch an edge, you can roll into turns very easily, the
advanced rider can recover easier, and for beginners, it’s much easier
to initiate turns.”

“I
love rocker,” says Bogoch. “It works for me, and it works for gapers.
Skis perform differently. There’s the obvious change in powder skiing —
it’s easier. But what I find remarkable is that you’re no longer
worried about tip flotation. This means you can stand more square — a
tad more upright, even. And you can ski more aggressively and slide or
carve your turns as you see fit. It democratizes ski technique. You no
longer have to follow the rigid, classic techniques to have a good
time.”

And,
according to Pete Wagner, founder of Telluride custom ski and snowboard
manufacturer Wagner Skis, it’s about fun. “Advancements in technology
mean that people are finding that skiing is easier,” says Wagner.
“Rocker and reverse camber tip and tail shapes are something that are a
lot of fun and have their applications, and it’s great that people are
trying these things.”

Both
Wagner and Bogoch point out that Colorado skiers and snowboarders
looking to get on board with this new technology should look for models
that include traditional camber with a moderate rocker at the tip. Says
Wagner, “Moderate tip rise with traditional camber gets you the
advantages of camber with the soft-snow performance of rocker.”

Bogoch
recommends skis with modest rocker in Colorado due to the fact that
even if skiers are enjoying backcountry powder, there will always be
days when things aren’t so soft in-bounds.

“The more rocker a ski has, the less it will handle itself well on hard snow,” Bogoch says.

“We kept what we have and built on it,”
says Sanders, who takes pains to point out that the company’s Vario
sidecut and traditional camber are key ingredients when it comes to the
performance of its boards. “It took time for the technology and
sidecuts to catch up so you can make a rocker board that performs well
acrossthe board,” says
Sanders. “It’s really where snowboarding should be, it’s more fun, and
it makes things easier — it gives the board a nice surfy feel without
sacrificing stability.”

Says
Liberty Skis’ Dan Chalfant, “there are some really radical designs out
there that are over the top. We are very conservative in using rocker,
because most people ski on harder snow at least part of their day. And
if the ski doesn’t perform well in harder conditions, it’s really not a
very good product. You want versatility in your skis, especially if you
only own one pair.”

The
experts have spoken, but will rocker work for you? Should you ditch
your faithful equipment that’s served you so well over the past few
years to jump into the world of rocker? Take note of the experience of
Rick Weiner. A committed skier and snowboarder, Weiner leaves Boulder
each weekend for the slopes. Last season was the first time he’s tried
anything with rocker. “The last time I experienced a revolutionary
sensation of this magnitude under my feet was the first time I strapped
a Burton Woodie on, about 20 years ago,” raves Weiner. “I am a true
believer!”

ROCK OUT: A
variety of companies — both large and small — are now offering rockered
skis and snowboards. In fact, the choices can be dizzying, and the
trend doesn’t look like it will slow down any time soon. Here are a few
of our picks of the litter for this winter:

Never Summer Legendary
Colorado snowboard manufacturer Never Summer builds a variety of boards
featuring rocker technology. Their Premier F1-R is an ideal board for
riders who like it all, and comes in lengths from 157 to 172
centimeters. neversummer.com

Wagner Skis Peter
Wagner makes custom skis and snowboards designed to “make it as easy
and as fun as possible” for his clients when they’re spending a day on
the mountain. Because each product is handmade in Wagner’s Telluride
factory, no two are the same, and each is tailored specifically for the
end user.wagnerskis.com

Liberty Skis This
small Colorado manufacturer makes a full line of skis featuring
environmentally friendly bamboo-core construction, and its factory and
offices are wind-powered. Its Helix model comes in lengths of 167 to
187, and features the company’s Fat Head technology, which, according
to company President Dan Chalfant, is “mini-rocker” in the tip and
tail. libertyskis.com