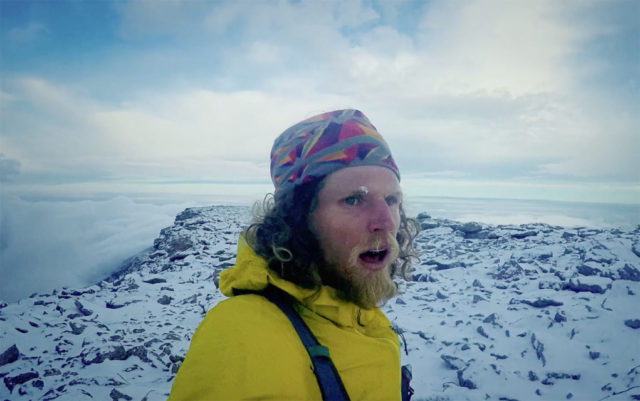 A still from ‘The middle way’

It was July 2016 when Grant, a 36-year-old professional ultra-runner, decided to summit every 14,000-foot peak in the state via human-powered means. He left from his driveway in Gold Hill with nothing more than his bike (a Reeb Dikyelous hand-built in Longmont), a sleeping bag and bivy sack, a change of warm clothes and an extra pair of running shoes.

From Gold Hill he pedaled straight to the base of Mt. Bierstadt (some 60-plus miles), stashed his bike in the woods and ran to its 14,065-foot summit, then traversed over the Sawtooth ridge to summit 14,265-foot Mt. Evans, before running back downhill to his bike. He immediately pedaled south, to summit Pikes Peak outside Colorado Springs the next day. Then he tagged the tops of Humboldt Peak, Kit Carson Peak, Challenger Point, Crestone Peak and Crestone Needle the day after that. He continued alone, day after day — south first, then west — laying down a giant, serpentine GPS track across the state, linking 57 unique 14,000-foot summits in order to complete what is known among quirky endurance circles as the “Tour de Fourteeners.”

Fueled in large part by thawed gas-station burritos, Grant returned to his doorstep 31 days, 8 hours and 33 minutes later — now the fastest human ever recorded to bike the 1,000-plus miles between the peaks and run the near-400 miles of trails to each summit.

Shortly after finishing he told Trail Runner magazine, “I’m not sure what I’ll do next year, but I’ve got some ideas.”

His ideas, it seemed, included a third-place finish at the prestigious 2017 Hardrock 100-mile trail-running race, a seventh-place finish at the Crested Butte-to-Aspen Grand Traverse ski race, and setting another jaw-dropping speed record in 2018, this time on the infamous “Nolan’s 14,” a 100-plus-mile self-supported traverse of 14 14ers across the Sawatch Range, connecting Mt. Massive to Mt. Shavano. He did that in 49 hours and 38 minutes, without sleeping.

He also spent weeks in Europe and Alaska. He went on a nationwide speaking tour about the Tour de Fourteeners. He raced on trails in Japan. One day he ran up Utah’s Grandeur Peak 10 times (58 miles total, with 28,000 feet of vertical gain) to raise awareness about the poor air quality surrounding Salt Lake City.

“I travel so much for work,” he tells Boulder Weekly recently, “that it’s difficult for me to be on the volunteer firefighter side of things.”

This fact — that he isn’t home, in Gold Hill, long or consistently enough to contribute his time and energy to the all-volunteer Gold Hill Fire Department — seems to weigh more on Grant than anything else. He doesn’t want to talk about his speed records or traveling highlights. He wants to talk about Gold Hill, his love for the local trails and protecting the places he considers home. All of this, of course, is wrapped tightly around his motivation to help kickstart a new event in Gold Hill: the Sunset Trail Running Festival, which debuts Sunday, Sept. 22 and will raise money for the Fourmile Watershed Coalition and local fire departments.

“Obviously fires are a huge threat to the community,” he says. In 2010, Gold Hill was gravely impacted by the Fourmile Canyon fire, an 11-day fire that consumed over 6,000 acres of land and destroyed 169 homes. At the time, it was the most expensive wildfire in Colorado history; fighting it cost around $10 million and property damage amounted to over $215 million. Fire protection and awareness has stayed at the forefront of the little community’s psyche since then — Grant, his wife, Deanne, and their pup, Bella, included.

Gold Hill, an old 1800s mining town of around 200 people, is up Sunshine Canyon from Boulder, a few miles after the pavement turns to gravel. Grant describes his first visit to Gold Hill, almost a decade ago, as something like love at first sight. He and Deanne quickly rented a cabin for a year, then purchased their own home.

The Sunset Trail Running Festival will draw runners of all capabilities up to Gold Hill and features five events: a 50-kilometer race that follows the Switzerland Trail through the historic town of Sunset, another small community descendant of mining days; the “heavy” half-marathon (14.5 miles), which runs to Sunset and back; 10- and 5-kilometer fun-runs that loop up and around a nearby hill; plus a 1-kilometer “family and kids” fun-run that stays close to town.

“I wanted to be able to contribute in a way that I felt was helpful to the fire department,” Grant says. He’ll be setting up the course markings for the races, and for the past few months he’s been using his platform as a professional runner, writer and speaker to advertise and advocate for the festival. Aside from raising money for Fourmile Watershed Coalition and local fire departments — organizations actively restoring the health of the forested watersheds in and around the festival’s race courses — Grant hopes to draw folks up to Gold Hill, and this specific region of Boulder County, to its beauty see for themselves.

He also understands the irony that he, as a world-traveling professional runner, simultaneously identifies as an environmental advocate. Climate change has only increased the threat of fires nearby and worldwide. “My job is pretty intensive on the environment,” he admits. “It’s not so much about rectifying that, because travel allows me to have a platform to talk about these things. … There’s a lot of nuance to the work and a lot of nuance to what you could do, and so I try to find ways that I can contribute that feel impactful.”

Grant believes “a local focus and approach is probably one of the most effective ways to make positive environmental [effects].” He hopes people leave the trail-running festival with a better understanding of the land surrounding them, and a deeper connection to it.

Deeper connections, after all, have always been Grant’s modus operandi while running. More than speed records, more than fame and fortune (measly in ultra-running anyway), endurance projects like the Tour de Fourteeners and Nolan’s 14 are Grant’s primary methods for understanding his home — Colorado, Gold Hill, the mountains — in a more intimate way. “It’s a natural thing to want to protect the places that you love and spending so much time outside, it’s a lot more than just recreation for me,” he says. He hopes the Sunset Trail Running Festival is “more than just about running.”

There’s no need to be superhuman to understand the value of healthy land, it turns out. You can go outside, in your backyard, and trail your fingers along the grass. You can listen to the birds on your morning commute. “The reality is that it’s hard not to be moved in places you spend time in,” Grant says, especially in a place like home.