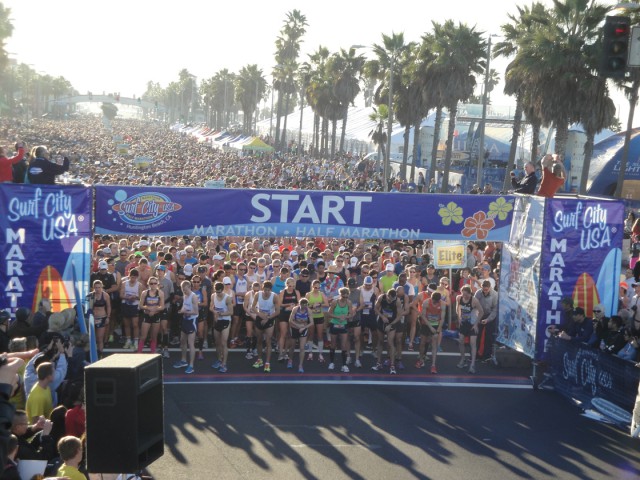 At the start of the Surf City Marathon in Huntington Beach, Calif., on Sunday, Feb. 3, the announcer asked the more than 2,000 people at the start line to raise their hands if they were running their first marathon. Boulder resident Michael Stone put up his hand, but it was not technically his first marathon. In the last decade, he has run 26.2 continuous miles more than a few times — after each 2.4-mile swim and a 112-mile bicycle ride in the 11 Ironman triathlons he completed.

He was also wearing another label that was not exactly accurate: blind. He has known that he was legally blind since 2003, but this was the first race he would compete in with “BLIND” printed on a hazard-orange vest over his sleeveless triathlon suit. As his eyesight continues to degenerate, he decided he ought to wear the vest for the first time.

“But to say that I’m not using my eyes is not true,” he says.

Stone was born with vision, but never had perfect eyesight. For most of his adult life he has just read his phone extremely close to his face. It was not until Sept. 8, 2003 — a day he says he will never forget — that an optometrist diagnosed him and his younger brother with a genetic disease called Cone-Rod Dystrophy. It is a retinal degenerative disease much like macular degeneration, which Stone watched take his grandfather’s sight.

At that point, Stone’s eyesight was two times below the standard for legal blindness, and it has only degenerated further since then. If you were to put on a pair of too-strong prescription glasses, smear the lenses with Vaseline and shine multiple flashlights in your eyes, Stone says that would be very similar to how he sees the world.

Contrary to what others might expect from someone who is “blind,” Stone does not live in complete darkness. He is so light-sensitive that the light from a chandelier in a dimly lit restaurant will require him to put on his sunglasses.

So when the race started before dawn and Stone began running on the palm-tree-lined Pacific Coast Highway, the lighting conditions were perfect for him. He was also running this race without a guide directing him where to go and alerting him to obstacles in his path. But using his hearing and limited sight, he was able to eventually separate himself with a group of 80 other runners clinging to the pacemakers assigned to run the race in 3:30.

Ardy Azadgan was one of these pacers, and he made an effort to alert Stone to rough terrain and obstacles in his path throughout the race.

“He seemed very even, very smooth and wasn’t breathing hard,” Azadgan says. “That’s when I had a hint that he knew what he was doing and how hard he was going to push himself.”

Since being diagnosed with Rod-Cone Dystrophy, Stone has completed more than 100 races, including 25 half Ironman triathlons and 15 Xterra off-road triathlons. Along the way, he has learned to adapt his senses and his race strategy. If the ground beneath his feet suddenly feels like soft grass instead of the hard boardwalk, he knows he has gone off course. The chatter, footfalls and heavy breathing from other runners also cue him to where the course ebbs and flows. And, his limited vision gives him a basic guide to shapes that might be in front of him, although he says he is not able to distinguish a runner from a trashcan.

Joanna Zeiger, an Olympic triathlete and friend of Stone’s, says she’s glad he was doing a race on flat, even ground.

“In terms of running the road marathon, I think it’s a heck of a lot safer than when he goes out and does those Xterras,” she says. “I always get very nervous when he does those things.”

Halfway through the race, averaging 7:55 minutes per mile, another runner pulled up alongside Stone to talk. When the runner asked how fast he wanted to finish, Stone replied that he did not really care.

Stone did not grow up playing sports, and his vision loss preempted his interest in endurance sports. Stone says he was especially attracted to individual sports after his diagnosis because they were one of the few things he could do by himself anymore. When Stone goes to a restaurant, he has to have the menu read to him. He cannot pick out groceries on his own. It has been more than 10 years since he last drove a car.

“What it comes down to is that when you lose your independence, the last thing you want to be is more dependent,” he says. “Some of this is a matter of pride, and some of this is just that I want to go out and have that freedom. So running and riding my bike is freedom to me.”

When Stone passed under the balloon arch and American flag at the finish line in 3:30:35, he finished in 230th place — out of 2,274 total participants. If he had not gone off course a dozen times, sometimes wandering for minutes before being redirected back onto the course, he speculates that he could have run 3:20, or 3:10.

But, he says, “to go out and run a three-and-a-half marathon, legally blind, by myself, it feels pretty damn good.”

Stone says he does not expect to be doing this forever. In the last year, his eyesight has degraded faster than ever, and it is possible that one day he could be totally blind. But until then, he plans to keep competing in the marathons and triathlons. His goal is to break 3:00 in the marathon within a year.

But no matter how fast he runs, he says, his main goal is to savor the time that he gets to spend alone on his own two feet.