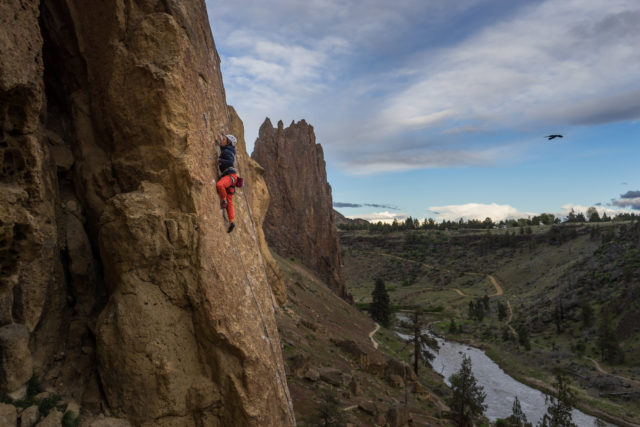 I’m at the climbing gym and spot an enticing, new orange toprope route. The grade poll taped next to the first hold lists options of 5.9, 5.10a or 5.10b: a good warm-up for me. My friend tells me it’s sandbagged, or harder than the tag suggests, but I decide to tie in anyway. I work through the first few stiff moves and reach a small roof. My right foot is on a tiny edge and my left foot is on a lower, bigger hold. My left hand has three fingers of purchase on a sloping, greasy hold above the roof, forcing me to lay back away from the next hold up to the right. It feels like it’s miles away. I step up on my right foot and lock off my left arm. I reach, reach, reach with my right arm, but I’m still a foot from the hold. I stubbornly attempt the move 15 more times before I finally resign with a sigh to cheat through it.

We’ve all been there. Maybe it was at the gym. Maybe it was a route outside graded decades ago when 5.10 was the top of climbing’s difficulty scale. Maybe it was a friend who told you to hop on a “super easy route” that just wasn’t. Congratulations, you’ve been sandbagged!

This route at the gym continued with reachy, powerful moves on awful, tiny, greasy, sloped holds that repeatedly kicked me off the wall. I gave up one move from the top. As my friend lowered me down, anger swelled up in me. I couldn’t believe I could get shut down so completely on something someone considered a 5.9 — my normal warm-up grade.

I showed up to the climbing scene a little late. I’d been interested for years, but was incredibly intimidated by climbers, including my own friends and ex-boyfriend. The climbers I knew were strong and fearless and that’s just not how I saw myself. Only after I’d found some other beginner friends to climb with did the flame catch. I then went through that annoying new-climber phase wherein I was completely obsessed. Advanced climbers still intimidated me, but I also felt like I was earning some rank in their club. I faked it ’til I made it — “making it” consisting of realizing that basically everyone is faking it, because anyone that says climbing is not scary is obviously lying.

I’d been climbing for a year and a half the first time I sandbagged someone — my climber-ex-boyfriend. Years after breaking up, he was in town and I took him to a local crag. He’d been climbing for decades, but not much recently. I was still trying to prove I could play with the big kids. After a warm-up, I suggested he try the first 5.11 I had ever flashed (gotten to the top without falling on my first try): an awkward off-width chimney that was too big for decent purchase with my hands or fists, yet too small to completely shimmy up inside. The suggestion came from a combination of excitement for having flashed it recently, and self-doubt that the route was even as hard as I remembered. He fell on it, and eventually gave up completely. For a shameful second I was validated that my flash wasn’t some fluke — maybe I could climb with the big kids. But much stronger was the guilt that washed over me when I saw his downtrodden face after the attempt. I realized that I had sandbagged him big time. But it was surprisingly easy for me to brush it off as others do: Grades are so subjective. I guess off-widths just aren’t his thing.

Sandbagging is a manifestation of the egos that drive us as climbers. From the privilege of comfortable lives, climbers push themselves outside their comfort zones to prove that they’re strong and capable. But the emotions running through my over-pumped veins after that orange route in the gym were not feelings of strength. They could be peeled like an onion: anger, frustration, disappointment, self-doubt, and under it all, my wounded ego. But another ego is also involved in sandbagging: the person who sets the trap — consciously or subconsciously — and misleads the climber’s expectations. Now only they, the sandbagger, can climb this “easy” route, certifying their superior skills. The sandbag is climbing’s variation of the humble brag. 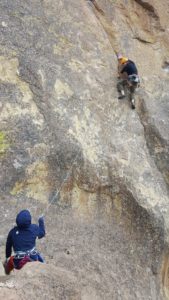 Some argue that sandbags are good for you. They force you to climb things you might not necessarily attempt otherwise; they make you a stronger climber; they check a climber’s over-inflated egos. But we’re not all here to redefine the limits of human capability, and we’re not all egotists. Another equally valid reason you might climb: to maintain sanity in a messed-up world. I climb because it helps counter my self-doubt and the cultural conditioning that tells me to stay inside, be quiet, be careful. Also because it’s fun. For those of us that show up to the crag or gym for some basic self-care, sandbags aren’t a great fit. Anyone can still work on redefining limits without sandbagging others.

I know, climbers are getting so soft these days. The old-timers that put up your favorite “5.9+” didn’t have the luxury of learning to believe in themselves and/or lead climb in the safety of a dry, well-lit gym with crisp orange tape for every hold. But times have changed, and they won’t change back. For every professional 5.15 crusher, there are thousands of gym climbers, 5.fun sport climbers, and 5.easy trad climbers. And we will be exactly as soft or hard as we want to be, thank you very much. Instead of assuming we know what anyone else needs, let’s celebrate and embrace the fact that climbers no longer fit a cookie-cutter stereotype.

Climbing gyms evolved from the training needs of early climbers to push the limit of 5.10 outdoors. As they’ve evolved, they’ve helped make climbing accessible to the masses. The popularity of climbing has exploded, posing major challenges: a huge demand for access to climbing areas, and the rapid degradation of those areas without adequate infrastructure. Today, gyms are the epicenter of climbing communities everywhere, granting them the unique position of providing the framework of modern climbing culture and making strides in fostering an inclusive, supportive community.

Routesetting is a big part of that culture. The inherent subjectivity of grades and diversity of climbers means that we must accept that routes will always feel different to everyone. But as a routesetter, I’m also responsible for making sure everyone has fun. And it’s definitely not easy. It’s impossible to separate my perceived abilities (ahem, ego) from the routes and grades I set. It’s all I have to go off of.

When I set, it’s easy to focus on making sure the route can’t be “broken,” or made easier than intended by creating an unintended move, and hard to ensure a route is doable for everyone. After a while, the apathy seeps in: “Welp, I can’t make everyone happy.” But that is the stuff sandbags are made of. My own feedback about the orange route was met with indifference or with deprecating comments like, “You’ll just have to train harder.” Taking feedback seriously makes better routes, and helps foster an inclusive and supportive community. And small adjustments like, say, adding another tiny, greasy bump on that orange route, can make a move doable for one climber, without making it any easier for others to “break” the route. 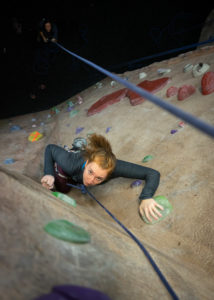 When I finished the orange route, I tallied my own grade on the poll, adding 5.11a. I thought I was being generous. I’ve never tried a 5.11 outside that I couldn’t at least work all the moves on. The route was eventually graded 5.10c. I chalked it up as just another sandbag and tried to let it go. But these sandbags accumulate. I count them in the gym: routes graded well within my range that have completely shut me down. And eventually, I’ll feel that itch to prove something again.

I just hope my poor ex is not the victim.

Let us all ditch this cycle of treating our bruised egos by sandbagging-it-forward; let’s swallow our insecurities, and focus instead on sharing our love of climbing. Elitism, only fortified by sandbagging, still keeps many from advancing in climbing, especially those in underrepresented groups. Climbing is fundamentally communal — we need each other. And not just for the belays, but also to come together to address much bigger issues like access and degradation of our climbing areas. Enough divides us, let’s make climbing something that brings us together.