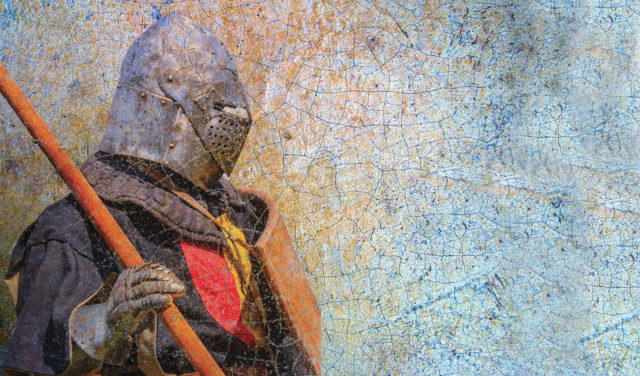 In the story of St. George and The Dragon, a town is plagued by a monster, who is only satisfied when the townspeople offer up human sacrifices selected at random. When the princess is chosen, the king is beside himself, until a traveling knight comes to the rescue and slays the dragon.

Growing up, Kryssi Miller was enchanted with this story and the knight who saves the day.

“It was the first time I read about the notion that someone could be a traveling knight,” Miller says. “That lifestyle really appealed to me — a guy on his horse, with his cool warrior gear and a sword, trying to help people, riding across the countryside, camping out under the stars and committing great acts of bravery.”

As she entered adulthood, she gave up on the dream, as many children do when their letter from Hogwarts never arrives or the back of the wardrobe doesn’t lead to a mystical land.

“I ruled that out early on because I was like, ‘I don’t think that’s an option,’” Miller says, laughing.

As it turns out, Miller was wrong. While she might not be literally battling fire-breathing lizards, Miller is living out her childhood fantasy as the leader of the northern-Colorado-based jousting troupe Knights of the Tempest, both a theatrical troupe and competitive team. Miller and company have competed in tournaments and put on shows throughout Colorado since 2016.

Along with jousting, Miller’s skills include other medieval staples like sword fighting, mounted spear and ax throwing, bullwhip stunts, fire eating, and trades like leatherwork and horse training. Miller has been a regular at the annual renaissance fair in Larkspur, performing as her character Aerin, and every September she and her team compete at the Longs Peak Scottish-Irish Highland Festival in Estes Park. Last year, Knights of the Tempest came in second overall in team scores. Back in 2012, Miller made the festival’s history books as the first woman to win a day competition.

Miller started jousting in her early 20s, but she’d begun horseback riding more than a decade before taking up the lance. At age 9 she’d saddled her first horse and proceeded to try every horse-related activity available. She pulled from English and Western styles of riding, participating in drill team, rodeo, dressage, horse ranch versatility, jumping and, eventually, polo, which Miller says was her gateway into jousting.

“I wanted to have all the tools in my tool box,” she says. “I wanted to try a little bit of everything.”

Miller attended a jousting clinic on a whim and soon after began training in the sport. A few years later, lounging around reading a book with her horse, Miller was approached by someone familiar with her jousting training and asked her to run a jousting demo and clinic to raise money for at-risk youth in northern Colorado. It was then that her and friends rallied together to start their own troupe, and Knights of the Tempest was born.

There are many iterations of modern-day jousting, but the two main categories are heavy- and light-armored. In heavy-armor, competitors don full suits of armor and try to dislodge their opponent from the horse. In light-armor, which Miller practices, the focus is on hitting a target on the opponent’s shield. Points are given for accuracy and force, such as unhorsing and breaking a lance, both of which can also happen in light-armored. Points are deducted for missing the target or hitting your opponent in a dangerous location. It’s an immediate disqualification if a horse is ever hit or mistreated.

A jousting match consists of multiple passes, one pass lasts about 10 seconds, and takes a great deal of coordination. Horses run down a lane, which is roughly 150 feet long with a strike zone in the middle. Jousters must drop their reigns when charging their opponent, relying on their horse’s training and their own horsemanship to guide the animal. Before the strike zone, Miller has to put up her shield with her left hand and point her lance with her right hand while accounting for the horse’s movement. Then, simultaneously, she delivers a hit and receives a blow herself. She only has a few seconds to recover before the end of the lane, where she disposes her lance and stops her horse — all while wearing cumbersome armor and a helmet that minimizes her field of view. To top it off, the sport is usually done outside in the summer,  under the blazing sun.

The sport requires a lot of training — both for animal and rider — and equipment, much of which Miller and her teammates make themselves. Injuries plague competitors, too, from bruises and black eyes to broken bones and concussions.

“It’s a weird thing,” she says. “There’s no reason to do it. There’s no gene that’s like, ‘Yes! Get horses and run at each other with a lance and beat the shit out of each other.’”

Jousting dates back to the middle ages, when lances were still used in warfare. By the 15th century, it had evolved into a sport, but its violent roots are still preserved in the sport’s extreme nature.

“Back when knights were at the top of their game, a group of knights coming at you would be horrifying,” Miller says. “Imagine a group of people encased in steel all thundering at you, and they’re also incredibly skilled and [equipped] with swords and long-reach lances and spears. It’s incredibly effective.”

Miller likens the draw to any other high-risk, adrenaline sport like BMX stunt riding or cliff jumping. She cites it as a good outlet for aggression, and moreover it helps players from all backgrounds find and stay in present moments.

“A couple of us are just sad and disenchanted with life. It’s nice to have something that makes you feel really alive,” she says. “My beautiful, glorious vision for [jousting is as] an outlet for those of us who need to get forced out of our heads. … You have to be in the moment.”

Miller stresses that as much as jousting is a physical sport, the mental game is just as important. Even the fright of seeing your opponent can be intimidating. Miller recalls one of her first training sessions with her coach.

“I’ll always remember that initial moment of bringing the horse around, and there’s my opponent at the other end: black helmet, black horsehair flume,” she says. “Then we go running at each other, like, ‘Here we go!”

A typical jousting match is four passes, but that day, Miller’s coach continued to call for more. She estimated close to 30 passes, each one pushing closer to her breaking point.

“The lances are not light. Nothing is light. Everything is hot and sharp and made of metal. He just kept calling for us to come around, come around, come around. … I remember being at the end, and it’s kind of eerie to be wearing this metal helmet. You can’t hear anything outside. All you can hear is your own breathing and your heartbeat — that’s your soundtrack.

“I was so tired,” she continues. “I could barely hold my lance up or my head up. I didn’t think I could do it anymore. And I just heard him from the other side, ‘Come about!’ And I did. I pushed through it and I kept going. And that was really big for me.”

That session and those following instilled Miller with a sense of confidence that has bled into her everyday life. Throughout the seven years she’s been jousting, Miller says she’s achieved more than she believed possible. It’s a change that, as a coach now, she looks for in her new students. She cites it as one of the benefits of this “relentless” sport.

“Once you break through that threshold … anyone who gets it and keeps doing it is instilled with that feeling of bravery and confidence and self-assurance,” she says.

These traits, once the qualities attributed to knights in medieval times, have added to the theatrical side of jousting, too. While in her character, Aerin, and with her troupe, Miller explores and critiques social aspects of modern day, slaying 2019’s metaphorical dragons with Knights of the Tempest’s mission statement to smash the patriarchy.

A life-long actor, Miller says, “I’ve always had to play the ingenue, or young woman number 2, or secretary, or princess, and I’m always getting kidnapped. Now I can be whoever I want to be. So Princess Aerin became Knight Captain Aerin, and my dresses got shorter and shorter. I did a few shows where I had to jump from one horse to another, and it’s really hard to do in a full skirt. And now I’m like, wait, why do I even have a dress? Why don’t I have a 1930s cavalry soldier’s uniform? And then we’ll slap a bunch of armor on it.”

In the troupe, each female character gets to showcase the various facets of femininity they want to display. Miller strives to show her character can be a capable warrior and wear lipstick at the same time. She also sees jousting as a way of giving women a chance to take up space, something they’re often denied in everyday life.

When knights were prominent members of society, it’s safe to say they were comprised nearly entirely of men. As jousting progresses, it’s forced to evolve with the times. In her experience, Miller has seen women of all ages and sizes drawn to the sport. She even broke her own glass ceiling with her day-tournament win at Estes Park’s 2012 Scotsfest. At 5-foot-4-inches, Miller took down a much bigger male opponent — coupled with his horse, he outweighed her by more than 800 pounds.

“It’s still a very male-dominated sport, which is great. Guys are great. But I am very excited to bring more women into the sport,” she says. “I’m smaller than most women. So, it’s like, ‘Hey, I can do it. And if I’m crazy enough to do it, you can absolutely do it!’”

She sees value in jousting and renaissance culture, calling it “accessible art,” where patrons can enjoy themselves and then come up and pet the horses and meet the jousters.

“I know that this makes the world a better place because I see how happy it makes the audience,” she says.

And while Miller has achieved her desire of being a knight, there are still more fantasies on the horizon. She dreams of one day becoming a traveling troubadour on a painted wooden wagon drawn by two gypsy drum horses with a troupe of players. While she knows it’s unlikely, she’s not writing off the possibility of it happening one day.

“I only get this life once. I don’t get another chance,” she says. “I might as well do what I want to do!”