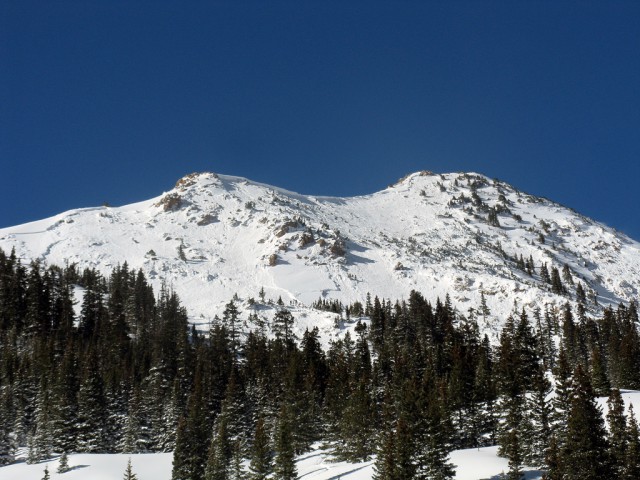 This has been a winter of bi-polar conditions in Colorado’s mountains. Strong storms have alternated with warm, wet days to create some of the most unpredictable snow conditions in 20 years. As we turn the corner to spring, it’s important not to let your guard down when traveling in the backcountry. Longer days and warmer temperatures can create the illusion of safer conditions — but they may be just that: illusions. Colorado’s snowpack can greatly vary from year to year, and it requires constant monitoring to predict a safer time to be on the slopes.

No matter what the calendar says, seasonal changes in the mountains happen in their own due time.

“The most common mistake people make is thinking, ‘It is now spring because it is March and it sure feels warm down on the valley floors.’ But near and above treeline, it is still winter and we still have winter avalanche problems,” says Scott Toepfer, a mountain weather and avalanche forecaster with the Colorado Avalanche Information Center (CAIC). “It’s the almost polar opposite of our most common fall problem where people think, ‘Oh, there’s not enough snow to avalanche on this slope’. In the spring we often think, ‘Oh, there’s so much snow, we won’t trigger those really deep, weak layers. That’s what they told me in my last avalanche class.’ When spring finally arrives is not dictated by a calendar date in the mountains. It is dictated by the weather. We often swap back and forth between winter and spring. That makes it kind of tricky sometimes. The snowpack kind of turns into a Jekyll and Hyde personality; sometimes spring does not happen until May.”

In the past 10 years across the United States, 98 deaths have resulted from avalanches in the months between March and July. Last year’s enormous avalanche that killed five experienced backcountry snowboarders and buried another near Sheep Creek off Loveland Pass occurred on April 20. As of press time, March had already seen two avalanche-related deaths in Colorado — one skier fatality near Conejos Peak on March 4 and one snowmobiler death on Sharkstooth Peak on March 5.

Meteorologist Chris Tomer explains why 2014 has the potential to produce difficult snow conditions in the next few months: “It’s been a big winter in the Central and Northern Mountains, with season totals now pushing 400 inches in the West Elks. That translates into snowpack depths 50 percent to 80 percent deeper than last winter — very similar to the big winter of 2011. On the other hand, the Southern Mountains have a thinner snowpack and need more snow. The high volume of snow this winter, combined with periods of high winds and cyclic warming periods, has created a snowpack ripe for avalanches. There are weaker layers embedded within the snowpack just waiting to fail, especially on steeper slopes. Terrain selection is the most important way to avoid getting caught in an avalanche.”

Toepher says that neutral temperatures in the Pacific Ocean — also known as “No Niño” — placed the jetstream over the Northern and Central Rockies, causing this year’s heavy snowfall.

“That leaves the Southern Mountains with less snow,” he says. “Reservoir storage has risen since last winter, now up to 89 percent of average.”

Toepher agrees with Tomer’s observation that assessing terrain is of vital importance.

“Of course terrain awareness is one of the most important things for backcountry travelers to recognize and evaluate,” he says. “It is a more complex problem than most people realize, though. Our vulnerability to the consequences of a ride in an avalanche is a byproduct of our choice in terrain. This vulnerability increases due to more factors than just how steep a slope is.

“If you hit a tree or a rock at 35 miles an hour, it won’t be pretty. If you are swept 50 meters off an ice climb and land on a rock ledge, your odds are not good. If you get buried upside down in a gully with your mouth and nose packed full of avalanche debris, you will have a lot of trouble breathing. These consequences and our vulnerability of getting caught in an avalanche are often missed or even ignored. And these are all dependent on the terrain we choose to ride. It might be the easiest part of the puzzle to decipher, but it is still complex.”

“This season there has been an abundance of snowfall, which, after two seasons of mediocre snowfall, is welcome, but also providing more opportunity for snow-starved skiers, riders and snowmobilers to get out further into avalanche terrain than usual,” B.J. Marraccini, communications director for Friends of Berthoud Pass, said via email. “We are seeing the number of reported accidents rise and, unfortunately, the number of avalanche fatalities this season has already reached Colorado’s five-year average, and it’s only early March.”

On average, eight people die in avalanches in Colorado each year. Certain types of avalanches are more common in spring, such as wet snow avalanches which trigger when the snowpack develops a layer of water below a heavy mass of snow. Rapidly changing conditions for precipitation and temperature, as well as wind — just like we see in spring — can also lead to unstable snow conditions.

“The snow has been great, but the avalanche problems are numerous yet also deceptive,” Marraccini says.

“We feel that adding additional basic avalanche awareness classes to our calendar will help reach more people than in past seasons, and hopefully increase their understanding of the conditions so that they can avoid typical mistakes while recreating in the backcountry. Most importantly, we want them to return safely for many more powder days ahead.”

Warmer weather and sunny days can create an illusion of stability.

“During the ‘spring’ we need to monitor both temperatures and cloud cover,” Toepher says. “If we did not get an overnight freeze, it may not be safe to travel into the backcountry at all the next day. For example, let’s say we have a mid-level stratus cloud deck overnight, making for a bit of a natural greenhouse, but temperatures fall a few degrees below freezing. We would have minimal or no long wave radiational heat loss, which might aid in keeping the snow surface from freezing hard and the snowpack could remain in a state of thaw. You could be walking into a wet slab avalanche problem when you leave your car at 6 a.m.

Sometimes the overnight lows are above freezing, but the skies are clear. This allows strong radiational cooling, which means the snow surface gets a solid freeze. The snow surface heating and cooling balance involves some complicated physics.

“Normally, it is a good rule of thumb to be out of the mountains by around noon in the spring. Rules of thumb are not facts, though. You may need to tweak your rule of thumb to match the need. Monitor temperatures, cloud cover and free water content in the snowpack on a regular basis to aid you in determining an appropriate exit time and strategy.”

Colorado has the dubious claim to 33 percent of all avalanche-related deaths in the country. Data from across the U.S. shows that snowmobilers are most at risk to trigger a deadly avalanche. In the past 10 years, 96 people have died in snowmobile-related accidents across the country. In this same time bracket, 90 people perished in ski/snowboard tours and 27 climbers lost their lives in avalanches as well. There have even been 11 avalanche deaths from in-bounds accidents at patrolled ski areas.

Because predicting avalanche activity is not foolproof, there will always be a risk of danger until the snow has melted. Beyond all the academic experience of studying the nature of avalanches, the human element cannot be ignored. Indeed, the groupthink mentality to push on late in the day in considerable avalanche conditions played a role in the Loveland Pass slide last spring. Having competent, trusted partners is a key component of backcountry safety.

“On the fun days, I tend to only go into the backcountry with a couple different people. My boss once told me, ‘Good backcountry ski partners are hard to find.’ I think this is really true,” Toepfer adds. “So a fun day usually starts a day or two before I go out. We’ll have a conversation over the phone, toss around some ideas. Talk about the snowpack problems and the weather forecast. Talk some about group dynamics and what our goals for the day might be. Sometimes we just want to climb a peak. Other days, we look for powder or corn. Sometimes we get both.”

The Colorado Avalanche Information Center website, www.avalanche.state.co.us — provides information on backcountry conditions. The Friends of Berthoud Pass website at www.berthoudpass.org will continue to update conditions specifically for Berthoud Pass as well as statewide information. Both sites will post when they offer classes and seminars.

Once you have properly equipped yourself and assessed the potential risks, Colorado’s backcountry mountains offer some of the most glorious and adventurous terrain imaginable. Good judgment and a strong knowledge of potential threats will increase likelihood for a safe passage and fun days in the high country. While no mountain outing is ever 100 percent safe, stacking the odds in your favor help mitigate the risk. Avalanches will remain an unstoppable force of nature; making sure you aren’t in their way isn’t just a matter of luck, it’s a matter of smart planning.