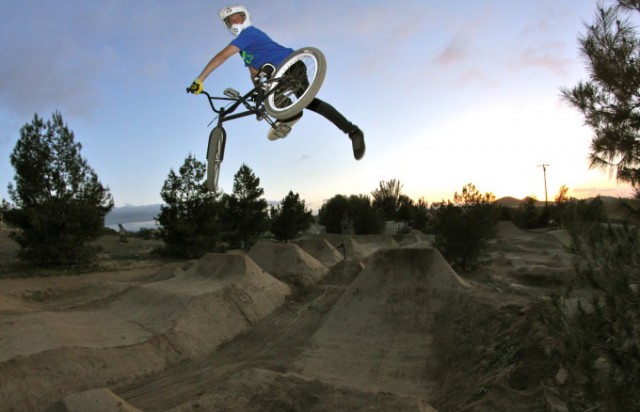 The gravity-defying tricks pulled off by the professional riders partaking in the Lyons Outdoor Games are enough to satisfy those in attendance, but many watch the aerial display to get a glimpse of local bike riding legend Joey Cordova.

Cordova, 29, grew up in nearby Longmont.

The professional BMX rider, whose expertise in the biking field is dirt jumping, graduated from Skyline High School in Longmont and relishes in his participation at the Lyons Outdoor Games.

“Lyons is a really great town with a lot of good people. Everyone involved makes the event really fun.”

Although Cordova moved to California seven years ago to better his career in BMX, he still has plenty of family in and around Longmont. The homecoming, which the Lyons Outdoor Games’ yearly invite provides Cordova, makes the competition especially significant to the local icon.

“The Outdoor Games has a special place in my heart because my family and friends who I grew up with get to come and watch,” Cordova says. “It’s always cool to come back and see people who I know, and catch up with people who I haven’t seen in awhile, and perform in front of the home crowd.”

On May 31, Cordova will be riding in his fourth Lyons Outdoor Games. His first appearance came in 2008 when he finished second behind his younger brother, Matt. Cordova won the event in 2011, but most recently finished fourth in the 2013 Outdoor Games. Even though the competitive juices do not run as rampant in Lyons as they do in other BMX competitions — one reason Cordova says he enjoys the event — he will still be trying to please the hometown fans with a finish better than fourth.

The laid-back and carefree tone in Cordova’s voice becomes far more somber when the Colorado floods from this past September are mentioned.

“That area, especially Longmont, is very special to me,” says Cordova. “There are still people going through tough times due to the flood, and I hope that the event brings people together and helps the people who are in need. I’m looking forward to doing anything I can to lift their spirits.”

The 13th annual Lyons Outdoor Games is closing the month of May, while once again acting as the unofficial kickoff to the summer season. The outdoor festival has been a local favorite for years, and those familiar with the event, including Cordova, couldn’t be happier that the Outdoor Games is taking shape after flash floods devastated the Town of Lyons eight months ago.

Local kayaking enthusiasts created the Outdoor Games in 2001 with the sole purpose of bringing the very best kayakers together to compete at Lyons’ renowned Whitewater Park. Since the inaugural event, the Lyons Outdoor Games’ organizers have diversified the athletic competitions while adding elements such as a beer festival and live music.

One of those event organizers is Chad Melis, marketing director for Reeb Bicycles, as well as the Outdoor Games’ title sponsor and popular brewery Oskar Blues.

“It’s a celebration of all things outdoors, all under the views of Steamboat Rock and Rocky Mountain National Park,” explains Melis, who was a regular attendee of the Games long before he got on board with Oskar Blues. “The outdoor element, the craft beer, and it’s very much a live music town — so all of the elements that make up the Lyons Outdoor Games celebrate what makes Lyons so special.”

The growing popularity of the Lyons Outdoor Games can in part be attributed to its expanding list of activities for people to watch and participate in. The onetime get-together for kayaking’s elite now comprises events like a rugby tournament, slacklining, a physically grueling obstacle course designed by Boulder-based Adventure Fit, and live music headlined by Grammy Award-winning artist Anders Osborne.

In case you like a cold beer to go with your live music, Oskar Blues has you covered. The Longmont brewery has organized 56 breweries, which will be serving over 250 varying types of craft brew at the third annual Oskar Blues Burning CAN Beer Festival. Sixty-five percent of the proceeds from the Burning CAN Beer Festival will go toward the Town of Lyons Department of Parks and Recreation, while the rest of the proceeds will benefit the Colorado Brewers Guild.

With more than 250 brews to try, limiting yourself to just one or two may be difficult. This is just one reason why camping at Lyons’ Bohn Park, where all of the festivities will be taking place, is an excellent choice.

Even with an expanding list of activities, the newest being the obstacle course and slacklining competitions, the BMX dirt jumping competition remains a crowd favorite.

Professional BMX rider Zak Early is from Maine, and admittedly has never stepped foot in the state of Colorado before. Still, when one of his sponsors came calling, Longmont’s Reeb Bicycles, Early jumped at the opportunity to ride at the event geared toward giving to a town that has lost so much.

“They want to make this event bigger and better than ever to show the town is strong, they persevered, and to build the town’s morale again,” states Early. “And it’s a true honor to be a part of it all.”

Not only will he be impressing the judges with his takeoffs from the BMX jumps at the Outdoor Games, but Cordova is also responsible for building the jumps. In recent years, Cordova’s passion and skill for building dirtjumping trails and features has rivaled his love of launching of the jumps themselves. Cordova says the task of building Lyons Outdoor Games’ dirtjumping features will take roughly 30 hours, which he and a few others plan to complete over three challenging days.

The course construction will undoubtedly be taxing, but the hard work will be well worth it if Cordova can put smiles on spectators’ faces, and possibly encourage a young fan or two to follow their own aspirations.

“Everyone has a passion,” acknowledges Cordova. “Whether it’s bike riding, music, drawing, whatever it is, there is always something that each of us loves to do. Hopefully what I do can inspire people to do what they love.”

After the natural disaster that was the Colorado floods in September, it is simply inspiring that the Lyons Outdoor Games will take place this year at all.

“It is an important year for us to continue to have the Outdoor Games, and progress the Outdoor Games,” explains Melis. “We want this to be the best event yet. This is a very significant year to bring the community out and set the tone for the rest of the summer, and do it all while fundraising to help the town get back on its feet.”

The Lyons Outdoor Games is May 31, at Bohn Park in Lyons. For more information, including a schedule of events, visit www.LyonsOutdoorGames.com.