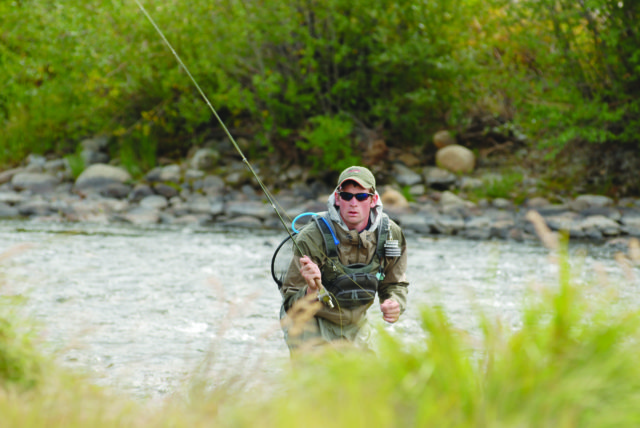 On the 11th of September, more than 400 people will coast through the Rocky Mountains, stopping in Vail. They will be from 25 different countries, and all their bags will be packed with similar things: water-proof clothes, brimmed hats, sunscreen and fly fishing rods.

They’ll check into their hotels, the teams will register — one per country — and at 5p.m. everyone will assemble at Gore Creek, each team holding their national flag, ready to proceed in the 36th FIPS-Mouche World Fly Fishing Championships’ opening ceremony.

“These are the best anglers in the world, from all over the world,” John Knight, the 2016 tournament organizer, says. For 20 years, he’s been living in Eagle County, where this year’s world championship will be held. For the past three years, since Knight secured Vail’s hosting bid, he’s dedicated thousands of hours to planning this “real-deal event, preparing our waters for the very best.”

For decades, fly fishing has been accumulating popularity and intensity as an international event. The Fédération Internationale de Peche Sportive-Mouche, or FIPS-Mouche (in French, mouche means fly, the insect) spawned from a group of Italian fishermen in the early 1950s who wanted to arrange world and regional fishing tournaments in Olympic style, “to foster friendship and understanding among all people, and peace in the world, through sport,” according to their website.

Since 1983, FIPS-Mouche has orchestrated international tournaments around the globe and boasts over 50 million members from 42 countries. The annual World Championships are hosted by a different country each year. The last time the tournament was hosted in U.S. waters was in Jackson Hole, Wyoming, in 1996.

“That was before I even knew competition fly fishing existed,” Lance Egan says. Since 2003, Egan has been a core member of the U.S. national fly fishing team. “I joined right when the team started transitioning from a ‘good ole boys network’ to a real team. They finally realized just inviting friends wasn’t the best way to go, or to win.”

At the 2015 World Championships held in Bosnia and Herzegovina, Team USA placed second. “Last year was the first time we ever medaled. So this year I think we’re set up to replicate our success,” Egan says. “I’m most excited for the team.”

Egan, from Provo, Utah, has been fishing since he was a young boy. “I don’t come from a family of anglers, so my parents always joke I got my fish obsession as a baby. When I wouldn’t sleep, they would prop me up in a car seat in front of my dad’s aquarium so I could watch the fishes. I guess it soothed me.”

This will be Egan’s tenth international tournament. “We’re the same team as last year, which is a good thing,” he explains. “We’ve already got the friendship and knowledge of each other’s tendencies. It’s a lot like pro basketball. There is real advantage here in having consistency in your team.

“We share a lot of information with each other. As we switch locations we always call or text each other to find out anything we’d need to know about the location. We get a lot out of that.”

Norman Maktima, another veteran Team USA member, agrees. “Our Team USA works extremely well together. We have competed against one another, but more importantly, we have fished together to a point that we understand our strengths and our weaknesses. We have a common language that we understand.”

Maktima, from Santa Fe, New Mexico, entered the international fly fishing scene in 1997, when he was asked to join the USA Youth Fly Fishing team. Since then he’s traveled the world, competing in Sweden, Italy, Slovenia and Quebec, among other places, and collected numerous individual medals. This year, he’s most excited to bring the fly fishing world to Colorado, and “to have my fellow friends-slash-competitors experience what we have as a fishery.”

Other Team USA members include Devin Olsen, Pat Weiss and Josh Graffam. Combined, they have almost 50 years of competition experience. Maktima says this year, “I have been preparing myself for the world championship physically by running, building endurance. Also, by tying flies and trying to spend time on the water.”

The tournament is spread over the course of a week. The first two days after check-in are dedicated to anglers’ practice and adjustment to the Coloradoan rivers, “which can be very different from other waters around the globe,” Knight says. Eagle County will differ from past championships, he explains.

“Here the anglers will fish for wild trout. In most of the rest of the world, they’re fishing stocked or artificially enhanced trout.”

The following three days encompass the competition sessions. Each angler gets three hours to fish over five sessions in different river and lake sectors around Eagle Country: The Eagle River, Colorado River, Blue River and Sylvan Lake. Volunteers waiting on the riverside record the size of each fish an angler catches. “100 points per fish, 20 points per centimeter, with a minimum of 20 centimeters. So the minimum points for a fish is 500 and it just goes up from there,” Knight explains. The team with the most points at the end of the week wins.

“The championships are [based in] Vail this year by design,” Knight explains. “We’ve trained Eagle County for the event. Colorado Parks and Wildlife and the private ranches situated along the river are all on board. We’ve been practicing events like this for years now.”

This time of year, Egan says, “The whole Vail area is gorgeous. And the water is slower, so it’s not too high to wade and makes for great fishing conditions.”

Among regional tournaments, last year Vail also hosted the Youth World Championships, Knight says. “Also, everything we do is catch and release. We use barbless hooks and all the detailed rules preserve the lives of the fish. Over the whole week we’ll catch over 3,000 fish and none will die. The health of the fish is primary. Anglers are actually penalized for killing a fish.”

Knight has worked diligently with Colorado Parks and Wildlife to ensure the event is a positive experience for everyone involved, both international visitors and local community members. “We’ve got a partnership with them to help provide fishing reports. We take all the data from our scoring — the size and quantity of fish — and compile it in order to provide a fishery report to the Parks and Wildlife and to the private property owners. It all gives them an excellent snapshot of the fish on their land.”

Knight says, “While we’re putting on a tournament, we’re also highlighting Colorado. There’s a lot of Americana going on: we’ve got the rivers and the mountains, it’s iconic Colorado. And that’s a big deal to a lot of people coming from far away.”

This year’s tournament also has a special message. A Conservation Symposium, which is open to the public and will occur at the Ford Amphitheater, will be held to highlight area watershed issues. Guest speakers will include a representative from Patagonia’s DamNation Film, Colorado Parks and Wildlife and Colorado Trout Unlimited.

“Sure, it’s a celebration of fly fishing, but this year conservation is a main focus,” Knight says. “Coming over to Vail, everyone has already won. This is clean water, with intentions to keep it clean. That’s a win for everyone.”

In addition to attending the symposium, Knight encourages anyone, fishers and non-fishers alike, to stop by the closing ceremony to experience the international flavor of the event, plus visit an art display of Montana-based Derek de Young’s fish-inspired oil paintings. During fishing sessions, the river banks too can be of interest to the public. “The anglers that will be competing are the best of the best. They’re bringing progressive techniques, different from the Western techniques used here,” he says. “It’s totally a spectator sport.”

More than any other part of the event, however, Knight says, “I’m excited to get everyone in the hotel and see that buzz of activity, the room completely full of the anglers, the comradery of friendships getting back together. It’s all about the Olympic spirit. You come here to win medals; everyone comes for sportsmanship and camaraderie. Being around like-minded individuals that care about clean water is really neat.”