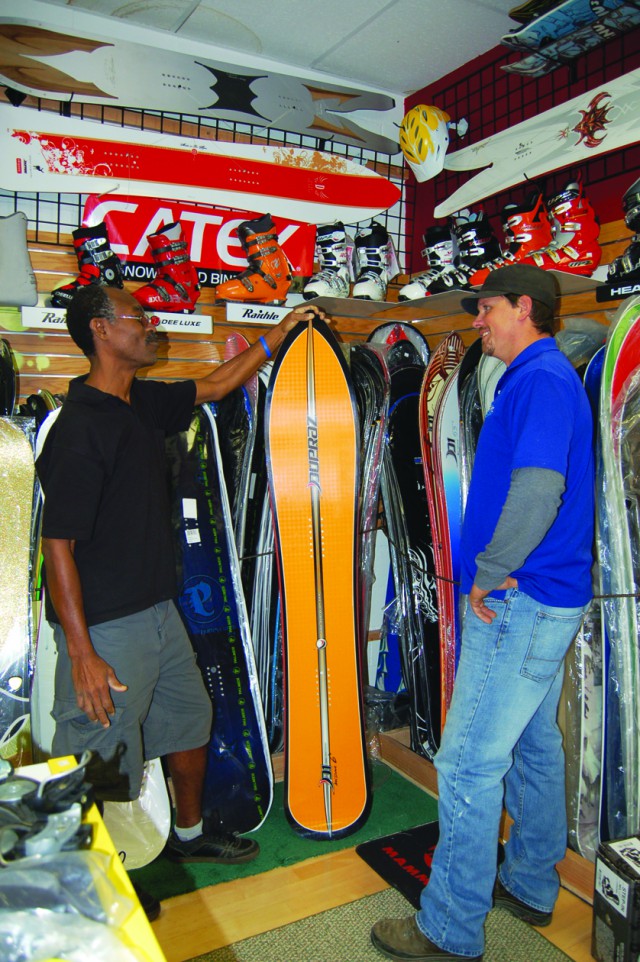 Snowboarding attracts a wide variety of enthusiasts. With so many mountains and so many types of terrain to explore, there are many different ways to enjoy the snow during the year, from cranking intoxicating, effortless turns in pure backcountry powder to slipping your way down a choppy resort groomer. Each type of snow needs a different type of gear, and the more you learn about how to conquer each one, the more you desire specialized (and complicated) gear to respond to your every whim on the mountain.

If you are still clawing your way up the steep end of the snowboard learning curve, then you have bigger problems than gear to worry about. But if you have paid your dues and are looking to expand your snowboarding horizons, you could probably use some help understanding the technology of advanced snowboarding gear.

That’s where Bola Ibidunni, owner of All Boards Sports in Boulder, steps in.

“If you’re a beginner, we could probably find you something, but we’ll probably send you somewhere else,” Ibidunni says.

There are few more qualified to explain the ins and outs of carving boards, aka “race boards,” that are his shop’s specialty. After all, before opening All Boards Sports eight years ago, Ibidunni was a materials scientist, consulting for NASA and working for Bell Laboratories, among other jobs. He provides consulting services for the top snowboard manufacturers in the world, though he won’t reveal any names. He knows more than just the specs and the designs of snowboards; he knows their anatomy.

“We’re probably the only shop in Colorado that has this big a selection of race boards,” Ibidunni says, gesturing to a custom-made Kessler board hanging on the wall as he explains the difference between finely tuned race boards and mass-produced alpine boards. “The equipment has got to be able to respond the way you want it to respond.”

Beginner’s boards are wider, and you’ll feel a little instability when you get going faster than 15 or 20 mph. Narrower race boards provide better control and allow for sharper, “knife-toknife, blade-to-blade turns,” as Ibidunni puts it.

“These things, you can point them straight down a mountain and you won’t feel a thing,” he says.

Race boards include materials to dampen out speed shakes and require solid, plastic boots that fit tightly to your foot to maximize the amount of finetune control you exercise over the board.

Ibidunni likens it to driving a meticulously engineered racecar.

“[On a race board], the board is actually responding to every input you give,” Ibidunni says.

He says he gets professional riders coming from all over the country to check out his shop. He is particularly proud of the Kessler boards he sells, which have dominated Olympic podiums for the past 16 years to the tune of six medals during the last two Olympics. Pros riding Kessler boards now include 2006 tragic second-place finisher Lindsey Jacobellis and 2006 team member Graham Watanabe. Seth Wescott, who won gold in Torino, called Hansjuerg Kessler and his team “artisans of the snowboard world.” To give an idea of the level of equipment Ibidunni sells, All Boards Sports is the only shop in the country to stock Kessler boards.

Ibidunni also sells what he calls “big mountain boards,” or “swallow-tail boards,” designed for only the deepest of deep powder. Swallowtail boards have fat noses and tails shaped like a snake’s tongue, and the missing end of the tail causes the rear end of the board to sink while pushing up the nose. When navigating several feet of powder, as those who’ve tried it will attest, this is a blessing since it eliminates the muscle-sapping need to crank the nose of the board out of the snow. And for the true backcountry junkies, he offers splitboards cross country skies for trekking up the mountain that buckle into a snowboard for riding down.

Snowboarding isn’t the only sport Ibidunni focuses on the store’s called “All Boards Sports” after all and his shop possibly has an even more expansive selection of longboard and skateboard decks than it does snowboards. He sells surfboards and wakeboards, and even parachutesfor kiteboards. His stock includes a vast selection of racing and slalom skateboards, even old school pool boards.

Ibidunni was born in Lagos, Nigeria, but he has lived all over the world, spending time in various parts of Europe before moving to New Hampshire roughly 16 years ago. He’s a recognizable fixture on Eldora Mountain: the guy going much faster than you on a carving board slicing precision s-turns into the snow. He doesn’t keep a high profile; in fact, if you weren’t looking for his shop, you might never see it. But he likes it that way.

“I consider us a quiet storm,” he says.

“The guys who know, come here.”

So what does he ride when he goes out?

“It depends on how I feel that day,” he says. “Half of it is a mental game. It’s what’s in your head that day… Carving boards are very demanding and if you’re not on you’re game, you’re gonna get spanked.”